Florida Doctor Who ‘Lost Everything’ After Storming the Capitol on Jan. 6 and Bragging About Forcing Senators to Hide Gets 12 Months Probation 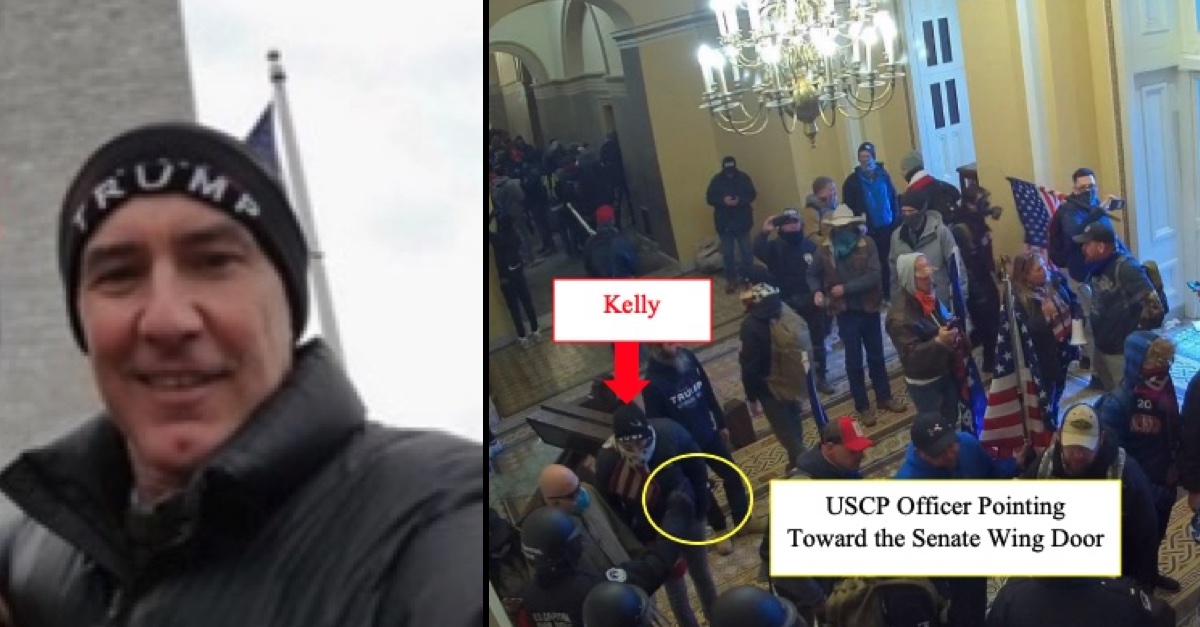 The Florida doctor who lost his marriage, job, and home after he entered the Capitol on Jan. 6 and later bragged about it has been sentenced to one year of probation, including two months of home detention.

Kenneth Kelly, 59, and his friend Leonard Gruppo had traveled together from Florida to attend Donald Trump’s rally on Jan. 6. They were later seen on surveillance video footage inside the Capitol building.

Kelly wasn’t among the front lines of rioters who broke through the doors, but prosecutors say he had to be “hoisted over a wall” to get into the building because the stairs were too crowded with people. Once inside the building, prosecutors say, he ignored a police officer’s direction to exit the building, and instead walked around for a few more minutes before finally leaving.

In a series of text messages, Kelly bragged about his exploits that day.

“Inside White House via breaking in windows!” Kelly said in a text message that was sent along with a picture that appeared to be taken from inside the Capitol building, which he mistakenly identified as the White House. “Tree of liberty was watered today!”

“Patriots stormed the White House [sic], broke in while Senate (with a little s) was in sessiondenating [sic] Arizona. The [sic] were hiding under ther [sic] desks. Forced into recess. Patriots took back our capital today,” he also texted, again erroneously identifying the Capitol as the White House.

U.S. District Judge Colleen Kollar-Kotelly cited those text messages when she sentenced Kelly, an emergency room doctor from Florida, to a year of probation that included two months of home detention.

“I debated back and forth about the length of probation,” Kollar-Kotelly said when she announced Kelly’s sentence. “I’m still a little concerned, based on his texts, as to what his understanding of the seriousness of his participation [is], as opposed to just that it’s had dire consequences for him.”

“I’d like to also feel more comfort in feeling that he really understands this was not the way to challenge an election,” she continued. “You don’t do it this way. You don’t try and overturn the government.”

Kollar-Kotelly, a Bill Clinton appointee, said that Kelly was “clearly happy that the [certification] process was stopped, that the insurrection cowed senators hiding under their desks. Those comments give me great pause.”

“I think those comments merit some home detention,” she added.

Kelly pleaded guilty in September to parading, demonstrating, or picketing in the Capitol building. He also faced additional charges, including disorderly conduct and entering and remaining in a restricted building, which have since been dismissed pursuant to his plea deal.

Gruppo, Kelly’s friend, had pleaded guilty in August and was sentenced in October to 24 months of probation, including 90 days of home detention.

The fallout for Kelly since his participation in the Capitol siege, when mobs of Trump supporters overran police and breached the building in an attempt to stop Congress from certifying Joe Biden’s win in the 2020 presidential election, has been significant.

His wife, who he married in 2004, has filed for divorce, and moved to Hawaii with the couple’s three children. He lost his job as an ER physician, and he said that he hasn’t been able to get a job since then due to his criminal case.

“He has lost everything because of this,” Kelly’s lawyer George Tragos said at the hearing.

Kelly said he is currently living in an RV, which he also uses to go between New Mexico, where he is also licensed to practice, and Florida. He also participates in nonprofit projects providing medical treatment to underserved communities.

Kollar-Kotelly said Kelly, who has been licensed to practice medicine in three states, should have known better than to join a violent mob at the Capitol.

“The violence of Jan. 6 is an unacceptable way to resolve political differences,” she said, adding: “As an educated man, you should have appreciated that.”

Kollar-Kotelly said that Kelly’s sentence could start on Feb. 4.