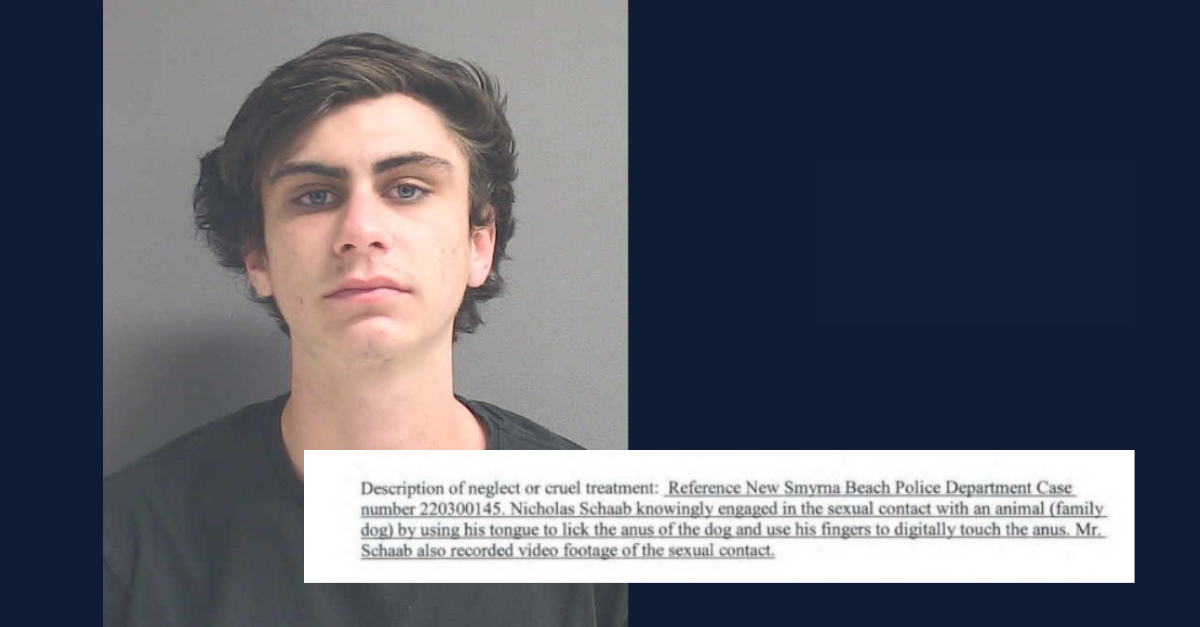 Nicholas Schaab (above in March 23, 2022 mugshot courtesy of Volusia County Jail) is accused of sexually assaulting his dog (excerpt from court filing inset).

A Florida man is under investigation after a video that allegedly shows him sexually abusing his dog was obtained by police.

Nicholas Schaab, 20, is accused of digitally and orally assaulting his “family dog,” according to a petition filed by the New Smyrna Beach Police Department Animal Services.

Officers learned of the video from Schaab’s ex-girlfriend, who identified the victim in the case as Berkley.

Schaab and his two roommates, Laura Daughtrey and Peter Rogalski, are now being investigated by police.

A civil complaint has been filed against Schaab for sexual activity involving an animal, but the three have not been charged with any criminal offenses.

There were also no arrests were made on Wednesday related to these allegations.

However, officers did take Berkley into custody. A member of the New Smyrna Beach Police Department tells Law&Crime that the dog will be staying at the Southeast Volusia Humane Society as officers investigate the case.

In the petition filed in court on Wednesday, Officer M. Wilk states:

Nicholas Schaab knowingly engaged in sexual contact with an animal (family dog) by using his tongue to lick the anus of the dog and use his fingers to digitally touch the anus. Mr. Schaab also recorded video footage of the sexual contact.

Officer Wilk states that a former girlfriend of Schaab alerted authorities to the video after it was sent to her by an unknown number, according to the petition.

Schaab’s ex-girlfriend said that she proceeded to delete the number but save the video. The petition states that she also showed the video to her mother. 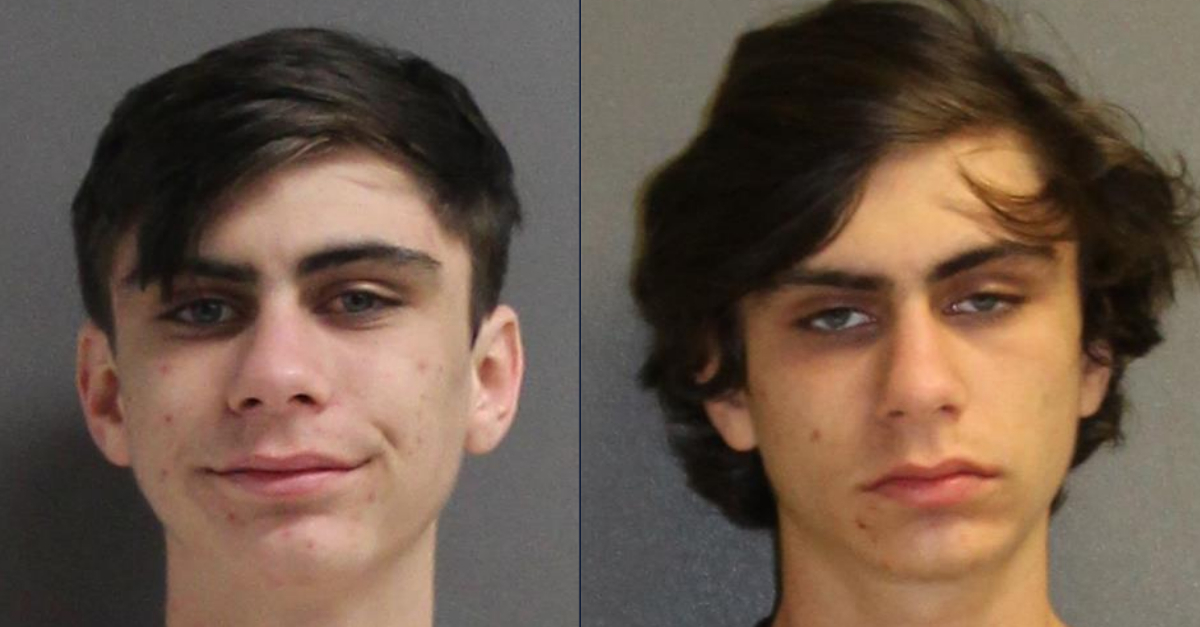 Schaab was arrested for disturbing the peace three days after his 18th birthday (left) and the following April for DUI (right, both mugshots courtesy of Volusia County Jail)

The petition reveals that Officer Wilk then extracted the video from the female’s phone with a UCB while also taking her phone as evidence in the ongoing investigation.

There is another male in the video who is not identified according to the petition, but it is unclear if that person is with Schaab or if the two are on video chat.

The petition describes the events of the video as such:

The video showed two males. [Redacted] was able to identify one as Nicholas Schaab. [Redacted] was in a previous relationship with Mr. Schaab. The second male [redacted] believes is Dillon, unknown last name. In the video you can see the dog (Berkeley) laying [sic] on the couch. [Redacted] explained she recognized the couch and that it is in Mr. Schaab’s residence [redacted]. Mr. Schaab is then seen grabbing the dog’s tail and moving it to the side. You can then see Mr. Schaab put his face to the dog’s anus and lick the anus of the dog. Mr. Schaab is also seen using his fingers to point and touch at the dogs [sic] anus. [Redacted] explained that she was very disturbed by the video so she deleted the number the video came from but saved the video.

Law&Crime is redacting the name of the ex-girlfriend because Schaab was arraigned on misdemeanor domestic battery charges earlier this month, Volusia County Court records reveal.

Schaab is accused of choking, punching, beating, and spitting on an ex-girlfriend multiple times during their two-year relationship in the charging affidavit filed in that case.

That affidavit also includes three photos from a March 19, 2021 incident that the alleged victim describes in detail.

On the way home, Mr. Schaab’s vehicle had a flat tire, and he pulled over. Mr. Schaab then got out of his vehicle, went over to the passenger’s side door, opened the door, and pulled [redacted] out of the vehicle onto the road. Mr. Schaab grabbed [redacted’s] arm, twisted it behind her back, upward towards her head. [Redacted] was yelling, “Stop, you’re breaking my arm” to Mr. Schaab. Mr. Schaab then jumped on [redacted’s] abdomen and chest area with his body, knocking the air out of her. Once [redacted] was able to get back in the vehicle, Mr. Schaab called her a liar and punched her in the face. Mr. Schaab put his hand inside her mouth, reaching to the back of her throat, scraping the back of the throat. [Redacted] stated she was coughing up blood afterwards.

Schaab has entered a not guilty plea in that case. 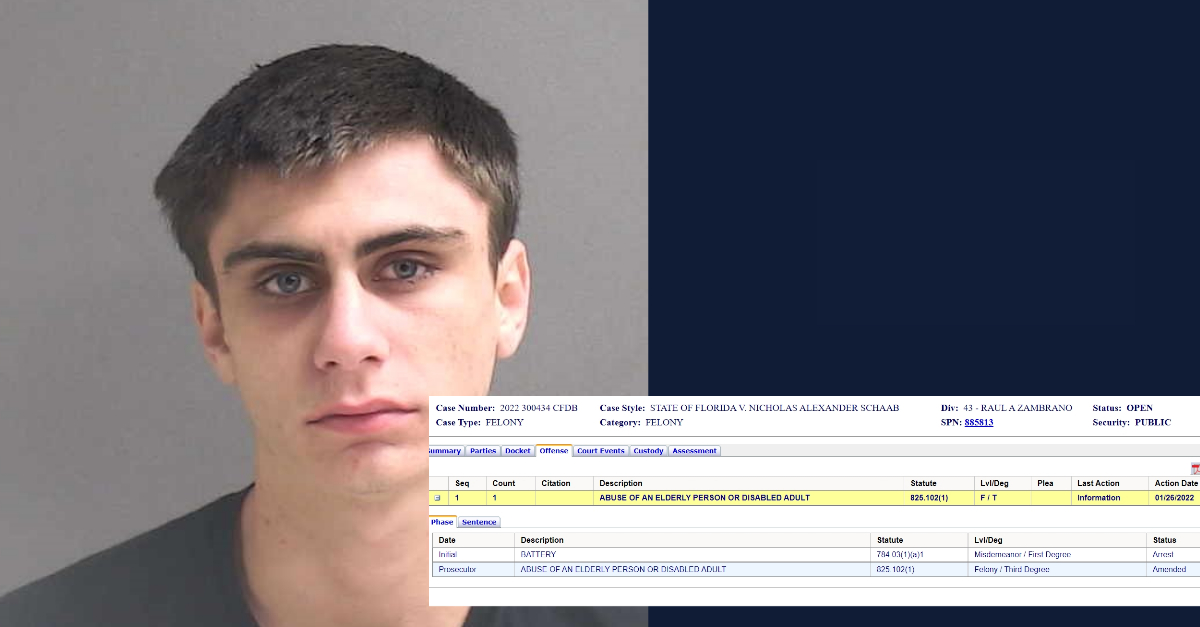 He is also preparing for trial on charges of misdemeanor battery and felony abuse of an elderly or disabled person. The court filings in that case are sealed, but the docket reveals that Schaab was booked on Dec. 23 and released on Christmas Eve after posting bail.

Schaab’s lawyer in that case did not respond to a request for comment.

On top of all that, new charges are now pending after Schaab was cited for driving with a canceled/suspended/revoked license and resisting arrest on Wednesday, the same day authorities took his dog away.

[Editor’s note: the caption under the mugshot once incorrectly stated the month of the image. It has been corrected.]