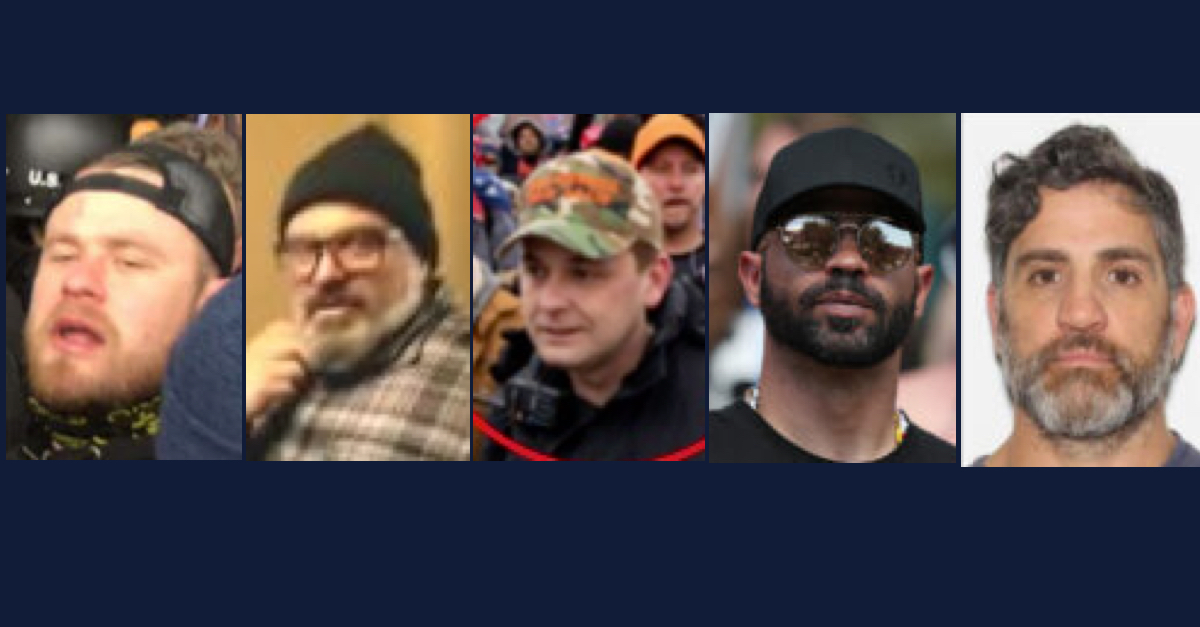 With an August trial date looming, members of the Proud Boys extremist group charged in a high-profile conspiracy case for their alleged role in the Jan. 6 attack on the U.S. Capitol say they need better access to discovery.

Their trial is currently set for Aug. 8. All five defendants are currently being held in different detention facilities ahead of trial.

That, their lawyers say, is causing serious problems in terms of accessing discovery. They say that the process of trying to review the thousands of hours of videos the government has acquired in its sprawling prosecution of nearly 800 Capitol riot defendants is cumbersome, unwieldy, and, in at least one case, bordering on unconstitutional.

“There is no way in the world I can give him a decent Sixth Amendment preparation,” attorney John Hull, who represents Biggs, said during a discovery hearing on Monday, referring to his client’s constitutional right to legal representation. “It can’t happen.”

U.S. District Judge Timothy Kelly, a Trump appointee, had called the hearing in order to hear from both defense attorneys and federal prosecutors as to whether the defendants have been able to review discovery. Prosecutor Emily Miller, who runs the discovery unit for the D.C. district overseeing the Jan. 6 cases, went through what she learned was available to each defendant at each facility.

She said the D.C. jail, which has a program that provides inmates with tablets that allow them to view electronic or digital discovery, is a “unicorn,” and noted that other jails don’t have that capacity.

She added that while the federal government has invested significant time, energy, and resources into enabling defendants to view discovery directly, it was “in no way a concession that these defendants are entitled to it as a matter of law.”

She said that since discovery has been made available to their attorneys, the prosecution has met its legal obligation to provide discovery.

According to Hull—and echoed by other defense attorneys at the hearing—the government’s summary of its discovery production was “disappointing, tone deaf, and replete with broken promises.”

Attorney Nicholas Smith, who represents Nordean, said that what Miller was representing “on paper is different from what happens in reality in these cases.”

Smith said that constant lockdown due to COVID-19 were part of the problem, but added that while the government may be making the documents available, it’s far from easy to access them.

“What the government will do is put thousands of video and documents on platforms, but getting access to those platforms is incredibly time consuming,” Smith said, citing multi-factor authentication processes. “With such a vast amount of discovery, this process would leave the defense counsel as nothing but middlemen.”

Smith said that although he’s “never encountered a discovery platform that’s so cumbersome,” he didn’t believe the government was “doing it on purpose,” but that there is simply so much material that it’s nearly impossible to manage.

Miller said that requiring multiple steps before accessing documents was a necessary security measure, and said that prosecutors and lawyers from the federal public defender’s office have successfully adjusted to using the discovery platforms.

“While it can be a cumbersome process to log in, the login issues are intended to protect the security of the database,” Miller said, noting that hackers are likely to be very interested in access to the discovery information.

“It’s slower with tokens,” she added, “but I took a survey of attorneys for the government who also have to log in with tokens … and every one of them said that while initially they had some difficulty, they worked through it with [the database contractor], and it works fine now.”

Kelly asked Miller if it would be possible to load the discovery onto individual computers and provide those to the defendants to keep with them in jail. Miller said that while it sounded like a simple request, it raised further security issues, and added that it was unlikely that the government would agree to allow defendants to review discovery without their lawyers present.

At the end of the hearing, Kelly said that he had a clearer picture of where the parties stood regarding discovery and that he expects an update at the next hearing set for May 19.

Charles Donohoe, a sixth defendant in the case and the leader of a North Carolina Proud Boys chapter, pleaded guilty in April to assaulting police and has agreed to cooperate with the government’s prosecution.