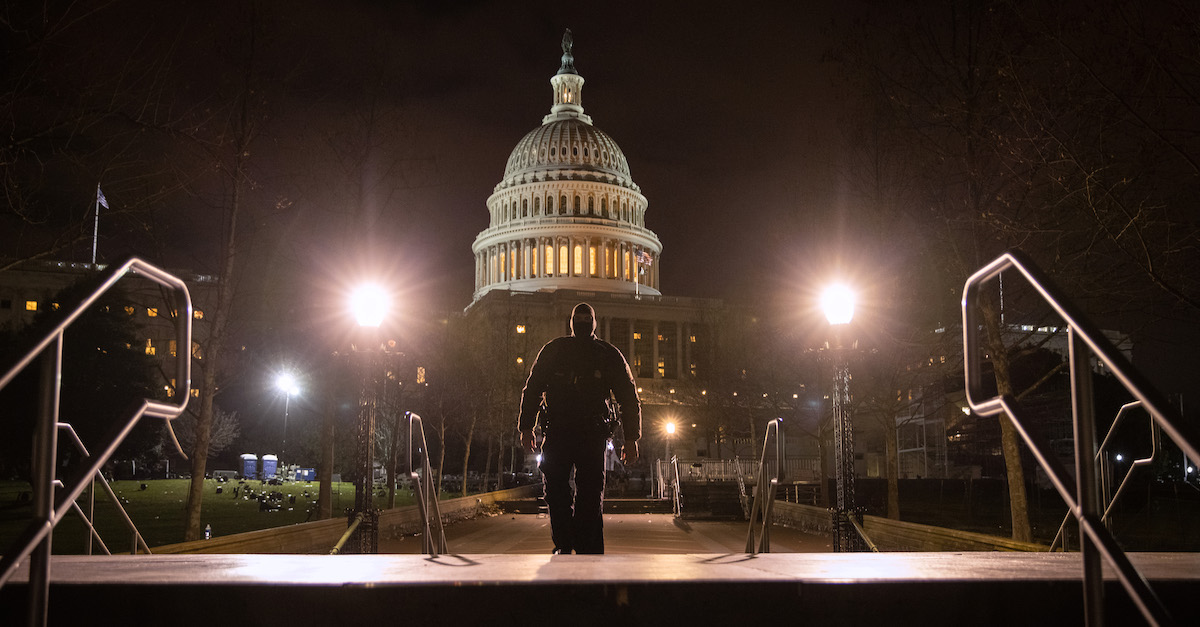 A Washington, D.C. police officer walks through the grounds of the U.S. Capitol after nightfall on January 6, 2021.

The Capitol Police officer who is accused encouraging someone to destroy evidence of participating in the Jan. 6 attack on the U.S. Capitol says that the charges against him should be dismissed because federal prosecutors haven’t actually identified the proceeding he was allegedly trying to obstruct.

Michael Angelo Riley is accused of obstructing justice by allegedly telling someone to delete Facebook posts tying them to the attack. That person—Jacob Hiles, a Virginia fishing boat captain who refused to do business with Democrats—has since pleaded guilty to a misdemeanor.

Both men were apparently members of fishing-related Facebook groups. Riley allegedly initiated the communication with Hiles after Hiles posted what prosecutors describe as “‘selfie’-style photographs, videos, and other commentary … admitting his presence and conduct inside the U.S. Capitol on Jan. 6, 2021.”

“Hey [Hiles], [I]’m a [C]apitol [P]olice officer who agrees with your political stance,” Riley allegedly wrote in a message on Jan. 7, 2021.”Take down the part about being in the building in they are currently investigating and everyone who was in the building is going to be charged. Just looking out!”

Prosecutors say that Riley and Hiles chatted online for about one month, during which time Riley allegedly encouraged Hiles to “Get off social media.” Riley also allegedly told Hiles that “if you went into the building and [investigators] have proof you will be charged.”

Riley apparently cut off communication after seeing a video in which Hiles allegedly smoked marijuana while inside the Capitol.

“I have to say, [I] was shocked and dumbfounded, since your story of getting pushed in the building with no other choice now seems not only false but is a complete lie,” Riley said. “I feel like a moron for believing you … I was so mad last night I deleted all your post [sic], but [I] wanted to text you this morning and let you know that I will no longer be conversing with you.”

Hiles was ultimately sentenced to two years of probation and 60 hours of community service.

Riley was charged with two counts of obstruction for allegedly persuading Hiles to “alter, destroy, mutilate, and conceal an object with intent to impair the object’s integrity and available for use in an official proceeding.”

“Riley directed [Hiles] to take down from Facebook records relating to his conduct at the U.S. Capitol on Jan. 6, 2021, with the intent of making the records unavailable for use in the federal investigation resulting from the Jan. 6 breach of the U.S. Capitol,” the indictment says.

On Monday, Riley filed a motion saying that the charges against him should be dismissed because the government can’t actually identify which “official proceeding” Riley was allegedly trying to obstruct.

“The Indictment does not specify — as required by law — exactly what constitutes the ‘official proceeding,'” Riley’s motion says. “Rather, the Indictment alleges in ambiguous terms that ‘the U.S. Capitol Police (USCP) and the Federal Bureau of Investigation (FBI) launched a criminal investigation, for which a grand jury was convened in the District of Columbia (the ‘federal investigation’).”

Riley, through his lawyer Christopher Macchiaroli, argues that “well-settled law makes clear that a criminal investigation (even one that ultimately leads to an official proceeding) is not an ‘official proceeding’ as defined by Congress and therefore cannot be the basis of criminal liability under the obstruction statutes charged in this case.”

The motion says that prosecutors identified the grand jury proceeding as the “official proceeding” Riley allegedly sought to obstruct.

According to the motion, prosecutors must show, beyond a reasonable doubt, that Riley had been thinking about a specific official proceeding “in which the[] documents might be material” at the time he intended to obstruct that proceeding.

Prosecutors failed to meet that standard, Riley argues, because Hiles’ statements themselves don’t warrant a felony grand jury prosecution, as allegedly evidenced by the charges that eventually were filed against Hiles.

“Even upon his arrest by the Government, and with a then truthful account of his actions at the U.S. Capitol (that were unknown to Officer Riley on January 7, 2021), the Government never even charged Mr. Hiles with a felony offense or presented his case to a grand jury,” the motion says. “Mr. Hiles was arrested on misdemeanor offenses, and accordingly, charged by Information less than five weeks after his arrest.”

Riley says that prosecutors “refused” to “confirm that the grand jury was “properly instructed” that they “could not consider a law enforcement investigation to be an official proceeding.”

“Because obstruction of an investigation is not a violation of 18 U.S.C. § 1512 and the Indictment does not identify a particular and foreseeable ‘official proceeding’ that Officer Riley allegedly obstructed, the Indictment is deficient and should be dismissed,” the motion says.