Accused California Member of Jan. 6 ‘DC Brigade’ Wants to Move to Texas, Where Employers Are ‘More Sympathetic to My Situation’ 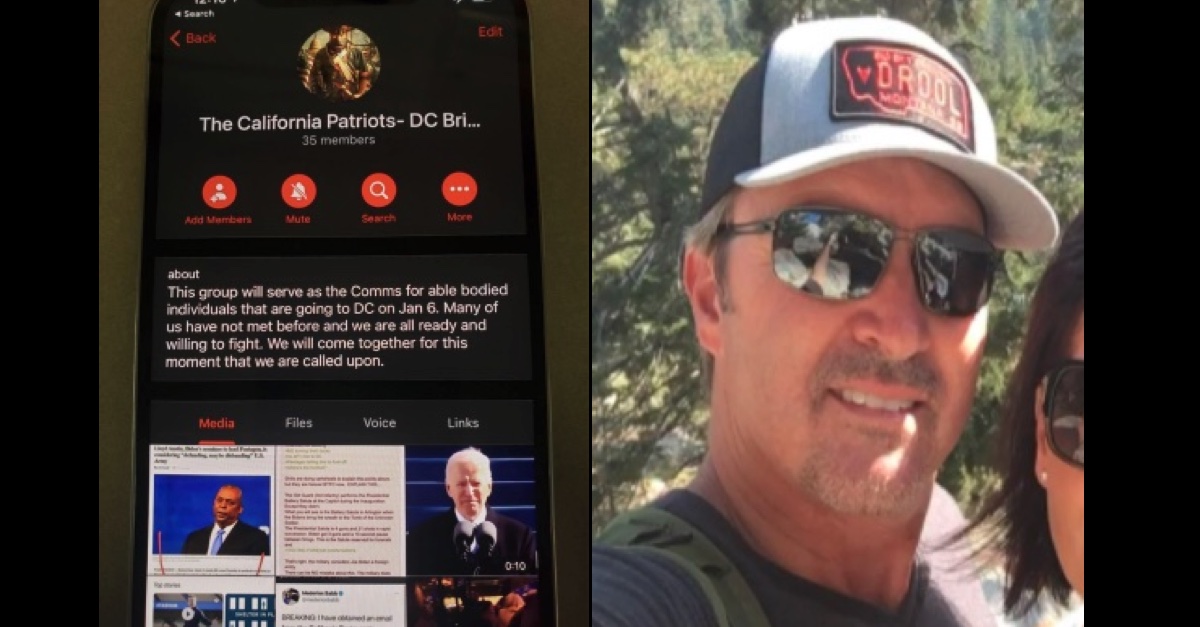 A screenshot of the DC Brigade chat (via DOJ); Ronald Mele (via GiveSendGo)

A California man indicted for allegedly conspiring with other members of an extremist militia to obstruct the certification of Joe Biden’s victory asked a federal judge for permission to move to Texas because employers there are “more sympathetic” to the charges he’s facing in connection with the Jan. 6 siege.

Ronald Mele is believed to be a member of the “Three Percenter” extremist militia group and a part of the so-called “DC Brigade” that allegedly planned and prepared to use military gear and weapons at the Capitol, though only one is accused of having brought a knife inside the building. The militia’s name derives from the widely-debunked myth that only three percent of colonists participated in the American Revolution.

According to Mele’s attorney Steven C. Bailey, prosecutors do not oppose his request to relocate while awaiting trial in the District of D.C.

“Traitors Need to Be Executed”

His co-defendants include Alan Hostetter, a cop-turned-yoga instructor who said in late November 2021 that “traitors need to be executed,” and Russell Taylor, who prosecutors believe carried a knife with him to the Capitol on Jan. 6.

Though Mele is not accused of hauling weapons inside the U.S. Capitol, prosecutors say that he talked about packing heat on a cross-country trip there some four days before the siege.

“Shorter the better,” Mele wrote in a message to other members of the group, according to his indictment. “Mine will be able to be stashed under the seat. I’ll bring it. 18″ barrel.”

Mele is also a defendant in the lawsuit against Donald Trump, Roger Stone, and various members of the Proud Boys, Oath Keepers, and others by law enforcement officers who were assaulted during the Capitol riots.

Mele currently lives in the Southern California city of Temecula. He says that although he has lived in the area since 1989, he now wants to move to Texas, where he says he will be more likely to find a well-paying job that he hasn’t been able to get in California since joining the mob of Trump supporters who overran police at the Capitol on Jan. 6 in an attempt to stop the certification of Joe Biden‘s win in the 2020 presidential election.

“I have always been employed as a salesman and have been very successful in that field,” Mele wrote in a declaration attached to his motion to change domicile. “My last employer prior to my indictment was Lactalis American Group, the largest dairy company in the world, where I was a regional salesman for the West. After my arrest, I was terminated from that position and have been unable to find another sales position in this area.”

“A Plethora of Job Prospects”

Mele says that he is currently working as a service technician for an HVAC company.

“My rate of pay is substantially lower than my former employment, as my rate is barely above minimum wage, forcing my family and I to live paycheck to paycheck,” Mele wrote in the declaration.

Mele says that the main reason for moving to Texas is so that he and his wife, Elinor Mele, can be closer to his stepchildren, who he says will be moving to Texas with his Elinor’s ex-husband.

Mele notes that Elinor “will secure employment in Texas, where she can continue her work as an esthetician,” and then adds that he is also more likely to find a better job in Texas.

“[T]here is a plethora of job prospects for me in Texas, as I have been in contact with several employers who have requested my resume as well as interviews,” Mele says in his declaration. “The employment opportunities offered to me in Texas have been in sales in which I have been successful in for over 20 years.”

Mele tells Senior U.S. District Judge Royce Lamberth, a Ronald Reagan appointee, that since losing his job post-Jan. 6, his prospects have been dismal.

“When applying for employment here in California, employers are enthusiastic about me at the onset as a possible job candidate because of my qualifications,” Mele says. “However, midway through the hiring process and once the employer has done a background search, I am immediately shutdown for any employment prospects when the employer finds out I have this pending criminal litigation on my record.”

Mele says that the job offers from Texas employers are all but rolling in at this point.

“This is in stark contrast with the employers that I have been contact with in Texas,” Mele writes. “The Texas employers are aware of my pending criminal matter, sympathetic to my situation, open to me being a part of their company, and enthusiastic to have my experience on their team.”

Mele adds that the cost of living in Texas is lower than in California, which would make it easier for him to “fully provide for [his] family” and they will “no longer have to live paycheck to paycheck.

Read Mele’s motion for permission to relocate to Texas, below.

[Images via FBI and GiveSendGo.]