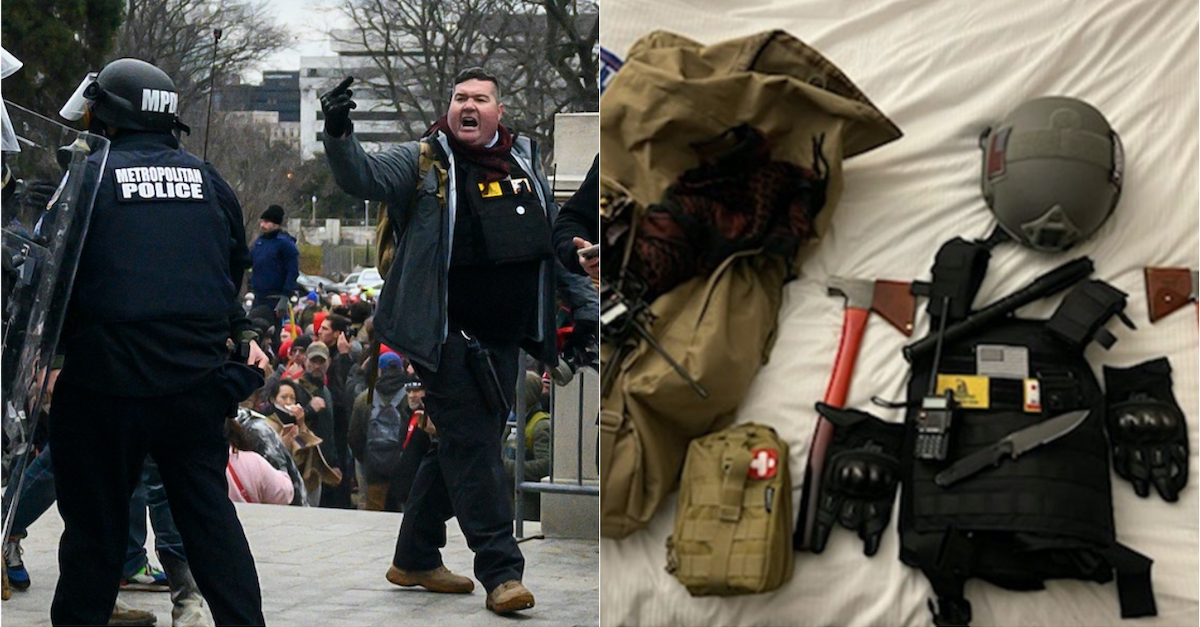 According to prosecutors, the photographs show Russell Taylor’s “open defiance” of officers and the tactical vest, knife and gloves, scarf and backpack that he wore at the Capitol on Jan. 6.

Russell Taylor, one of the men reportedly seen with former President Donald Trump’s associate Roger Stone the day before Jan. 6, was charged in court papers along with members of the extremist Three Percenter militia. He allegedly brought a knife with him to the U.S. Capitol, but a federal judge allowed him to remain a free man pending trial, noting that he did not bring the weapon inside the building.

“The government’s burden to justify pretrial detention by clear and convincing evidence is a heavy one, which the government has not met here,” Senior U.S. District Judge Royce Lamberth wrote in an 18-page ruling on Wednesday evening. 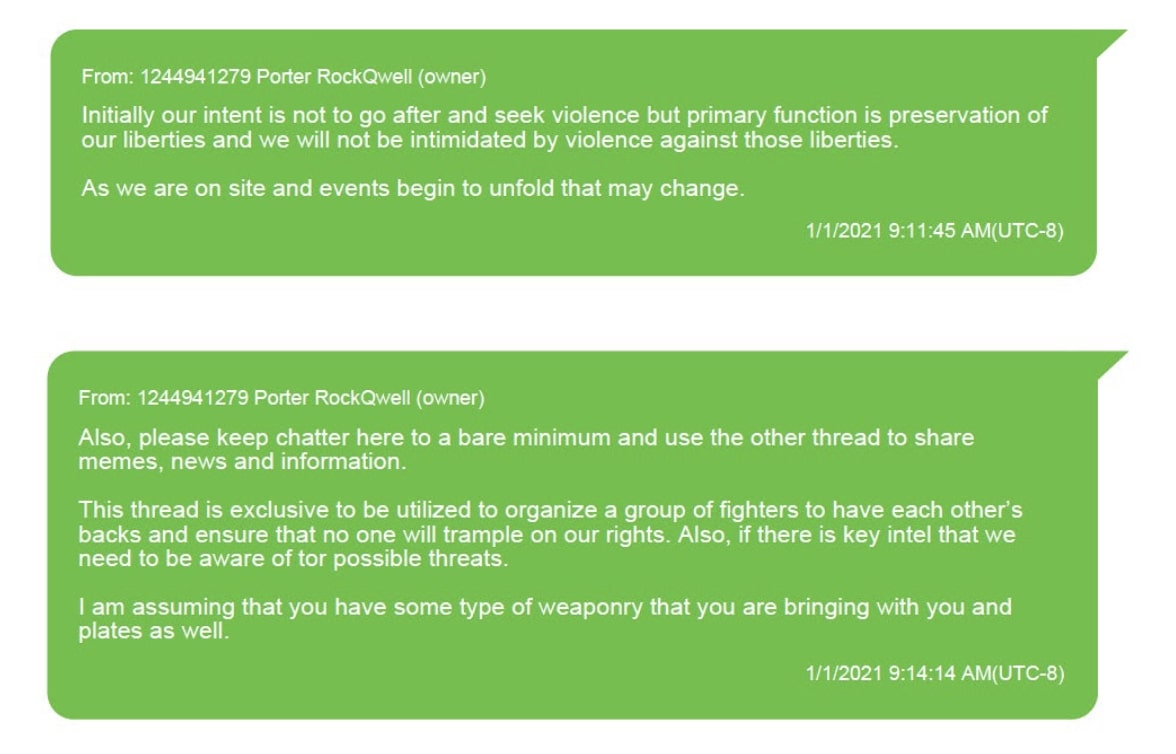 The day after Christmas, Taylor told Hostetter in a message: “I truly believe that we were meant to come together to be engaged in this war at this time and as I have said before it is an honor to be shoulder to shoulder with you,” prosecutors said.

Taylor’s alleged revolutionary fervor carried over into the New Year. On Jan. 2, Taylor responded to a query in that same group about what weapons could be carried in D.C. by answering: “’Hatchet,’ ‘[b]at,’ or ‘[l]arge metal flashlight,’” according to the indictment.

On the date of the siege of the U.S. Capitol, Taylor says he did not enter the building because he was carrying a knife, but prosecutors quote him celebrating those who “STORMED” the building.

“I was pushing through traitors all day today,” Taylor allegedly posted on Telegram that afternoon. “WE STORMED THE CAPITOL! Freedom was fully demonstrated today!”

When asked in a private message what the next step was, Taylor allegedly replied: “Insurrection!”

For Lamberth, the fact that prosecutors describe Taylor as an “extremist” is not enough to keep him jailed pending trial.

“Taylor is correct that he cannot be held because of his political beliefs,” his ruling states. “The government acknowledges as much. But the Court may consider Taylor’s statements to the extent they are probative of his motive or intent for engaging in unlawful activity.”

The judge appeared to find this question a close call.

“To be sure, Taylor acted on some of his statements leading up to January 6 when he showed up in D.C. with weapons and marched toward the Capitol,” the opinion states. “But the probative value of Taylor’s statements is diminished because Taylor chose not to enter the Capitol because he had weapons. And notably, the government proffers no additional information from which the Court can conclude that Taylor is likely to act upon ‘an extremist anti-government ideology’ in the future.”

Under the terms of his release, Taylor has surrendered his firearms, wears a GPS-enabled ankle monitor, and uninstalled his social media apps and encrypted messaging platforms.

“The Court agrees that Taylor’s actions on and preceding January 6 reflect poorly on his character,” the opinion states. “However, the Court finds that the other aspects of Taylor’s history and characteristics ‘reflect an ability to abide by the law.'”

“Liberty is the Norm”

Federal prosecutors have had an uphill battle in keeping Jan. 6th-related defendants locked up pending trial.

Reminding lower court judges that “liberty is the norm” in pre-trial detention, the U.S. Court of Appeals for the D.C. Circuit has overturned multiple rulings ordering pre-trial incarceration on the Jan. 6th docket. One of the most influential opinions came from the case of so-called “zip tie guy” Eric Munchel, who was pictured toting tactical restraints inside the U.S. Capitol building. The appellate court freed Munchel and his mother, who allegedly stormed the Capitol right along with him, in a ruling in March.

Citing that ruling, Judge Lamberth noted that Munchel was also accused of toting weapons—and actually entering the Capitol. Making it all the way to the Senate dais, Munchel chanted “Treason!” inside the building and after the siege, spoke to reporters about being to “rise up, band together and fight if necessary,” prosecutors say.

Lamberth said that Taylor’s alleged conduct fell short of that.

“To be sure, Taylor’s alleged conduct is cause for concern and warrants stringent conditions of pretrial release,” the judge wrote. “Taylor may pose some continuing danger, given his demonstrated willingness to use unlawful conduct to advance his goals on January 6.”

Taylor’s attorney did not immediately respond to an email requesting comment.