‘Not Simply About Efforts to Recover Improperly Retained Presidential Records’: What the DOJ’s Footnotes Reveal About the Mar-a-Lago Probe 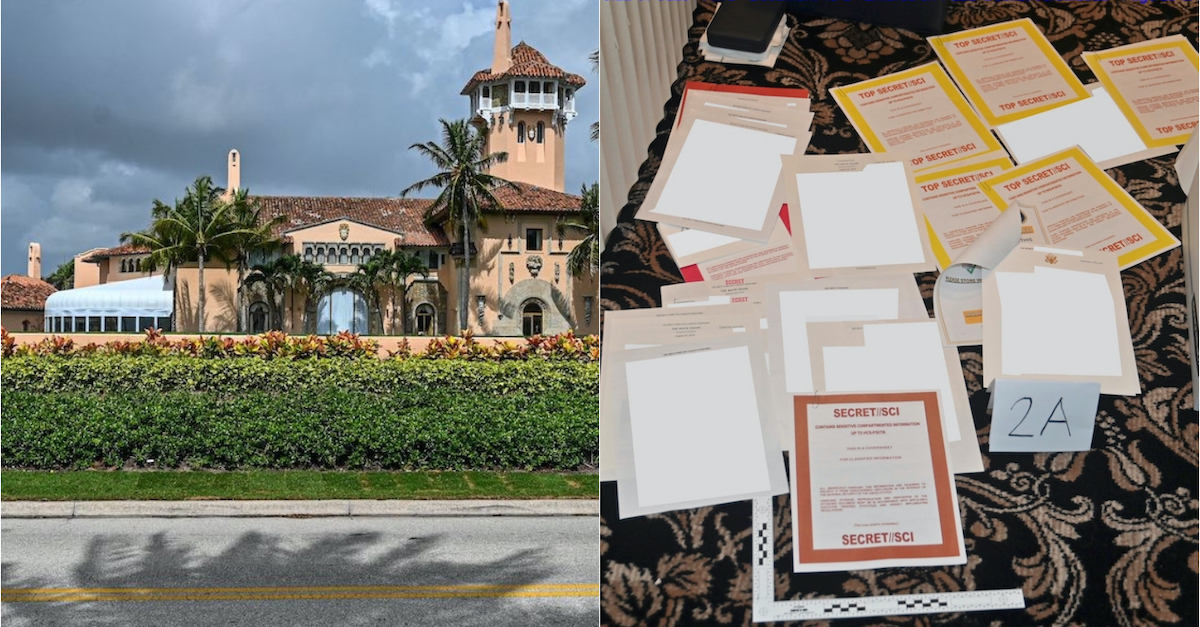 Inside its blockbuster filing about the Mar-a-Lago investigation, the Department of Justice unveiled the first photograph of the highly classified documents found in former President Donald Trump’s office and lobbed an explosive allegation that government records were “concealed and removed from the storage room” in a “likely” attempt at obstruction.

Some of the Justice Department’s other revelations inside the 35-page legal brief landed with much less fanfare.

Careful readers could find many of them buried inside 17 footnotes, which did not easily fit into the broader legal arguments made by U.S. Attorney Juan Antonio Gonzalez and Counterintelligence and Export Control Section Chief Jay Bratt.

“Always read the footnotes because those are things that were just too good to leave out of this,” noted Mitchell Epner, a former federal prosecutor for the District of New Jersey. “They couldn’t figure out how put it into the text, but they really wanted it in there. So they put it in the footnotes.”

That go-to rule, known to all lawyers and legal journalists, held true for the Aug. 30 filing, where the more than a dozen footnotes contained key clues about the course of the investigation and its possible next steps.

Law&Crime’s guide to these notations flags some of the most significant ones, unpacked in an annotated version of the document at the bottom of the page.

Shortly after the court-authorized search of Mar-a-Lago, Attorney General Merrick Garland preempted critiques about the transparency of their investigation by holding a press conference announcing the Justice Department’s intention to support the unsealing of certain search warrant materials. That pattern continued to play out in the first footnote of Tuesday night’s legal brief, quickly acceding to a request by Trump’s lawyers for more detail about the seized documents. 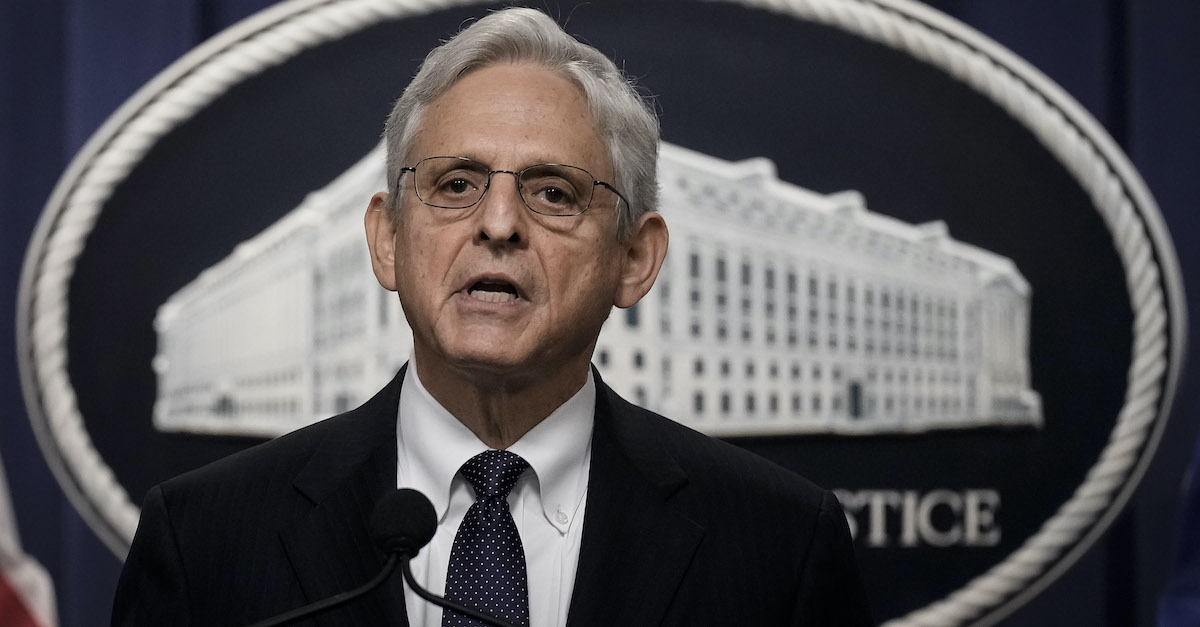 U.S. Attorney General Merrick Garland delivers a statement at the U.S. Department of Justice August 11, 2022 in Washington, DC. Garland addressed the FBI’s recent search of former President Donald Trump’s Mar-a-Lago residence, announcing the Justice Department has filed a motion to unseal the search warrant as well as a property receipt for what was taken. (Photo by Drew Angerer/Getty Images)

Though prosecutors say that the property receipt that Trump already received is legally “sufficient,” the footnote continues: “the government is prepared, given the extraordinary circumstances, to unseal the more detailed receipt and provide it immediately to plaintiff.”

Hours after the government’s filing, more than a dozen press organizations filed a legal brief citing the footnote and requesting access to the more detailed property receipt. When that document is ultimately released, Epner predicts it will not disclose every detail about the contents of the documents, but they “will speak to exactly how damaging all of this stuff is.”

Epner added that the release of that information, at Trump’s request, will lead to the former president being “hoist on his own petard.”

Of the attachments to the government’s brief, one that received considerable attention was a sworn affirmation from June asserting that all responsive records to the subpoena had been returned to the government.

Though the signature line has been redacted, The New York Times reported that Trump’s lawyer Christina Bobb — formerly of the right-wing TV network One America News — was the records custodian whose name appeared.

The fourth footnote to the brief notes that Trump himself took credit for matters related to that search.

“According to [Trump]’s filing, the former President had determined that the search for the materials should be conducted,” the footnote reads.

“I was surprised when I read that in FPOTUS’s submission,” Epner said, using the government acronym for former President of the United States. “Ordinarily, an attorney would not want to reveal who was making which decisions, because it potentially could expose that decisionmaker to jeopardy.”

“Commingled with Other Documents”

Trump’s lawyers have minimized the potentially serious legal jeopardy the former president could be facing under the Espionage Act, obstruction of justice or other statutes by arguing that there is “no criminal enforcement mechanism” under the Presidential Records Act.

The Justice Department, however, emphasized in its fifth footnote that the investigation goes far beyond that law.

“These accusations are belied by the statutes cited in the government’s search warrant, which make clear that this investigation is not simply about efforts to recover improperly retained Presidential records,” it reads. “Moreover, 18 U.S.C. § 2071 criminalizes the concealment or removal of government records, including Presidential records.” 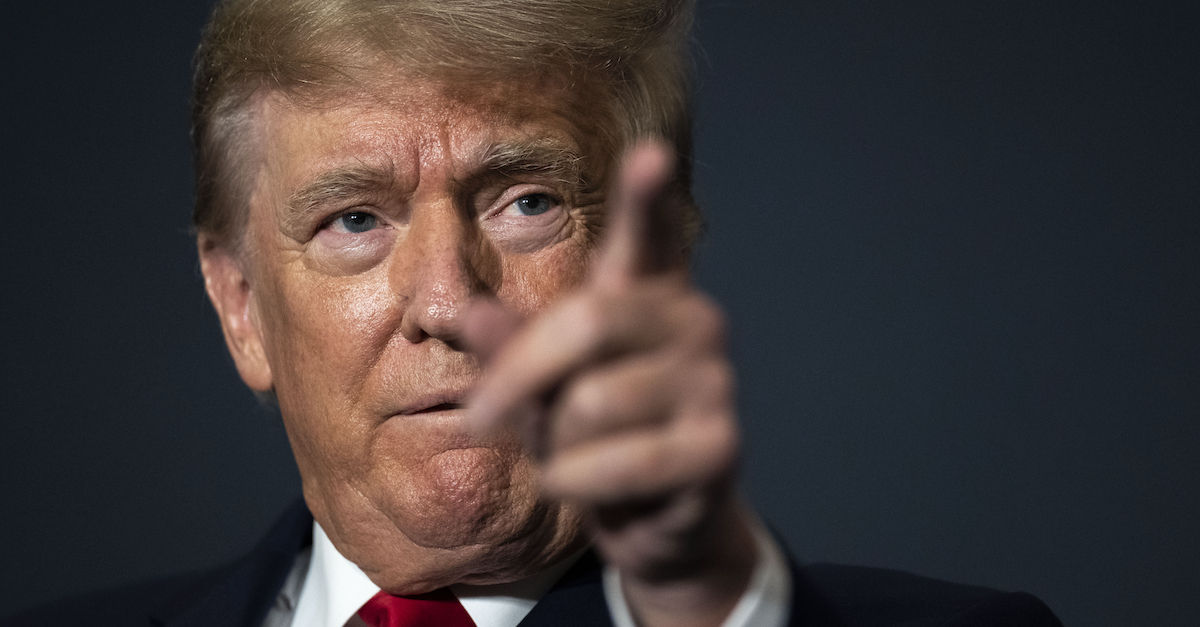 Donald Trump points during a speech on July 26, 2022 in Washington, D.C. (Photo by Drew Angerer/Getty Images.)

The former president and his allies have cited the fact that the FBI initially seized his passports to argue that authorities executed the warrant too broadly, but the next footnote explains from the government’s perspective why that happened. Trump’s passports were found inside “a desk drawer that contained classified documents and governmental records commingled with other documents,” according to the filing.

“The other documents included two official passports, one of which was expired, and one personal passport, which was expired,” the footnote states. “The location of the passports is relevant evidence in an investigation of unauthorized retention and mishandling of national defense information; nonetheless, the government decided to return those passports in its discretion.”

For Epner, the government’s explanation showed the FBI acted by the book.

“Any other individual in this situation would have had at least the expired passports held onto,” he said.

“Sticking the Knife into His Legal Team”

Dramatic revelations aside, the government’s filing serves a mundane and even arcane purpose: It argues against the appointment of a so-called special master to sift through the seized documents to separate potentially privileged information. The Justice Department has argued that a special master is unnecessary because it has handled that matter internally through the use of a privilege review team, also known as a taint team.

In at least three footnotes, the Justice Department cites a prominent precedent to argue that Trump waited too long to ask for a special master: the case of his former lawyer and fixer Michael Cohen, who requested one on the same day that the FBI searched his home.

Trump’s attorneys waited some two weeks before making their request.

“I think that it’s (a) absolutely correct, (b) a winning point, and (c) likely to drive a wedge between FPOTUS and the attorneys who were advising him,” Epner said of the comparison to Cohen.

Epner noted that even reliably pro-Trump boosters like Fox News personality Laura Ingraham have criticized the former president’s lawyers for waiting so long to request a special master.

Prominent national security lawyer Bradley Moss noted that a pair of other footnotes, namely the 12th and the 16th, highlight other apparent missteps by Trump’s legal team. Both relate to Trump’s failure to assert executive privilege in advance.

“Plaintiff’s motion does not purport to include any assertion of executive privilege by the former President,” footnote 12 begins.

Four footnotes later, the Justice Department emphasizes Trump made no claims of executive privilege at all when returning the batch of documents months before his home was searched.

“Notably, however, the former President never interposed any executive privilege objection to returning the set of classified documents that was provided by his custodian of records on June 3,” that footnote reads.

Moss was blunt about the significance of this pair of notations.

“They’re sticking the knife into his legal team for not doing this properly, assuming there even was a plausible legal argument to make (there was not),” he told Law&Crime in a message.

For Epner, Trump’s failure to raise the issue in June highlights another problem with his litigation position.

“It makes it clear to any educated person reading this — and [presiding U.S. District] Judge [Aileen] Cannon certainly that — that this was a litigation-created afterthought, not something that was contemporaneously believed,” he said.

Judge Cannon is scheduled to hold a hearing inside the West Palm Beach Division of the Southern District of Florida on Thursday at 1 p.m. Eastern Time.

Read an annotated version of the brief and its footnotes, below: