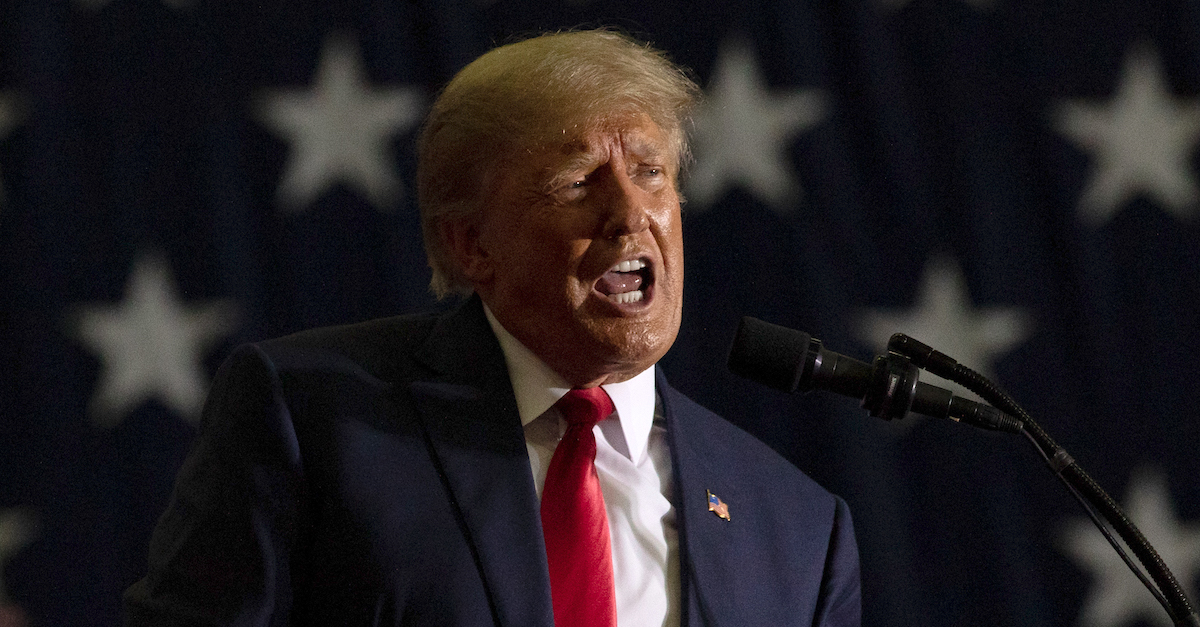 Former President Donald Trump speaks during a Save America rally on Oct. 1, 2022 in Warren, Michigan. (Photo by Emily Elconin/Getty Images)

Former President Donald Trump did not back down an inch from the personal and degrading taunts directed at his rape accuser E. Jean Carroll in a freewheeling deposition last October, which a federal judge partially unsealed for the first time late on Friday.

“I know nothing about her,” Trump said of Carroll. “I think she’s sick, mentally sick.”

Calling the famed columnist a “nut job,” Trump also doubled down on the same rape denials that inspired Carroll’s defamation suit, saying once again she’s “not my type.”

“I will tell you I made that statement, and I said, while it’s politically incorrect, she’s not my type,” Trump said. “And that’s 100 percent true. She’s not my type.”

Carroll has two active lawsuits pending against Trump over allegations that he raped her in a dressing room of a Bergdorf Goodman store in the mid-1990s. One accuses him of defaming her through his denials, and the other confronts the sexual assault allegations directly through New York’s Adult Survivors Act. Both Trump and Carroll sat for depositions late last year.

During his time on the hot seat, Trump was questioned by Carroll’s attorney Roberta Kaplan, who has faced off against the former president on behalf of multiple clients. She also represented niece Mary Trump and plaintiffs who sued Trump and his family for allegedly promoting a pyramid scheme on Celebrity Apprentice.

That wasn’t the only time Kaplan appeared to get under Trump’s skin in the deposition. She followed up one of the former president’s monologues with the query: “Are you done?”

In another passage, Kaplan spelled out the subtext about Trump’s remark about his type.

“The point of saying she’s not my type is to persuade people that you didn’t rape her because she wasn’t attractive enough; correct?” she asked.

Trump readily agreed with that interpretation.

Carroll says that she confided in two friends about the alleged assault, and she saved the dress she wore that day, which has been analyzed for DNA. She has requested genetic material from the former president.

“A Nicer Word Than the Word That Starts with an F”

In trying to fend off one of Carroll’s lawsuits, Trump’s lawyers have argued that he’s immune from defamation litigation for any statements he made in office, but he made similar remarks in a missive posted on his platform Truth Social long after his presidency.

“I don’t know this woman, have no idea who she is, other than it seems she got a picture of me many years ago, with her husband, shaking my hand on a reception line at a celebrity charity event. She completely made up a story that I met her at the doors of this crowded New York City Department Store and, within minutes, ‘swooned’ her,” Trump wrote.

In the deposition, Trump decrypted the euphemism.

“That would be a word, maybe accurate or not, having do with talking to her and talking her — to do an act that she said happened, which didn’t happen. And it’s a nicer word than the word that starts with an F, and this would be a word that I used because I thought it would be inappropriate to use the other word,” he said. “And it didn’t happen.”

When Carroll’s lawyer pressed whether he meant “sexual intercourse,” Trump replied: “Yeah. That’s because that’s what she said.”

The full deposition has not yet been unsealed, but the portion made public was attached as an exhibit to one of Carroll’s filings.

At least 25 women have accused Trump of sexual misconduct, and Carroll’s lawyers say that the former president used the same modus operandi against them: “destroy and discredit.”

Carroll’s lawyer probed those other allegations at length.

“Have you ever kissed a woman without her consent?” Kaplan asked.

“Have you ever touched a woman on her breast or her buttocks or any other sexual part without her consent?” Kaplan continued.

Following an objection by his lawyer, Trump replied: “Well, I will tell you no, but you may have some people like your client that lie.”

Asked if he ever pressured a woman to have sex with him, Trump responded: “The answer is no. But you may have some people like your client who are willing to lie.”

In the last full question quoted in the transcript, Kaplan asked: “Do you know what ‘sexual harassment’ means?”

A trial has been scheduled for April.

Read the deposition excerpt below: