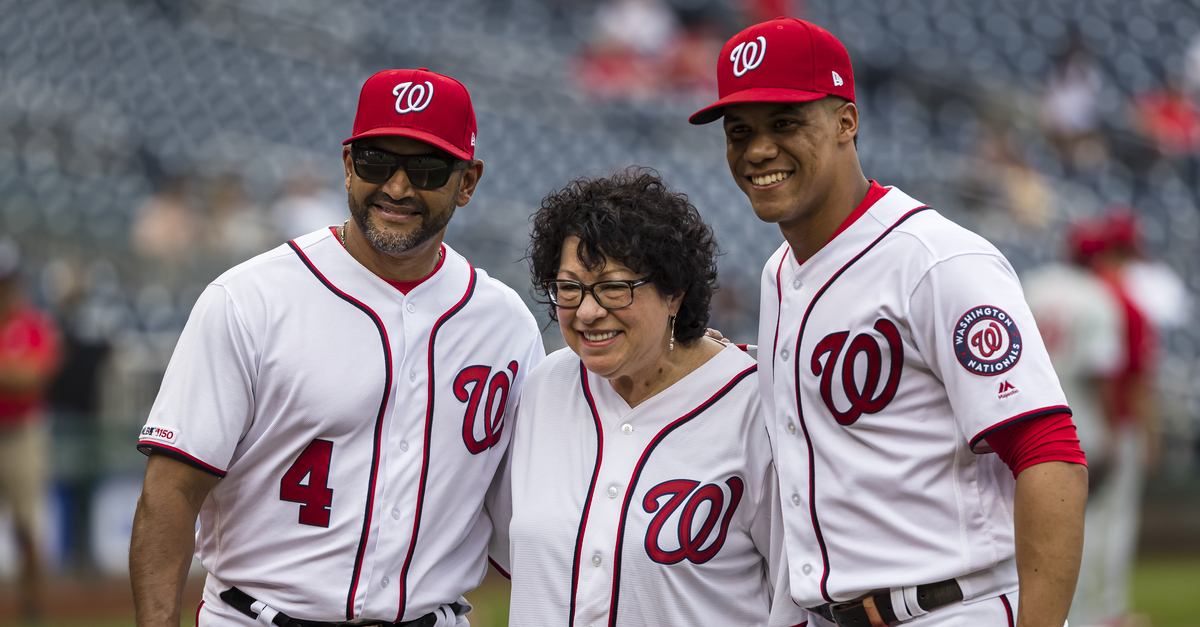 Supreme Court Justice Sonia Sotomayor stands with Juan Soto #22 and manager Dave Martinez #4 of the Washington Nationals after throwing the ceremonial first pitch before the game against the Philadelphia Phillies at Nationals Park on September 26, 2019 in Washington, D.C.

The U.S. Supreme Court on Monday ruled unanimously against a prisoner attempting to file a lawsuit without paying a legally-contested filing fee. Mired in procedural minutiae and various congressional causes célèbres of the 1990s, the opinion is also rife with references to the nostalgic national pastime.

Arthur Lomax is currently serving time at the Limon Correctional Facility in Lincoln County, Colorado. In 2018, he sued over his treatment at another prison–naming five Centennial Correctional Facility employees and one member of the Central Classification Committee after being kicked out of a sex offender treatment program–alleging various constitutional violations.

Along with his original petition, Lomax filed a motion to proceed in forma pauperis (IFP) pursuant to federal rules and longstanding legal traditions which provide poor, destitute and indigent plaintiffs the ability to file lawsuits without paying expensive court filing fees.

But then there was the 1990s. As the twin crazes of so-called “tort reform” and punitive “three-strikes” laws swept the legislative collective consciousness, the U.S. Congress passed the Prison Litigation Reform Act (PLRA) which amended and severely limited the statutory IFP provisions contained in federal law.

In no event shall a prisoner bring a civil action or appeal a judgment in a civil action or proceeding under this section if the prisoner has, on 3 or more prior occasions, while incarcerated or detained in any facility, brought an action or appeal in a court of the United States that was dismissed on the grounds that it is frivolous, malicious, or fails to state a claim upon which relief may be granted, unless the prisoner is under imminent danger of serious physical injury.

The district court denied Lomax’s 2018 bid for IFP status–to avoid a $400 filing fee–on the basis of the PLRA’s three-strikes rule and he appealed to the 10th Circuit, was denied, and then appealed again to the nation’s high court, which denied him again.

“Lomax is no rookie litigant,” the opinion notes–referencing the concept of a Major League Baseball player who has pitched or been at-bat relatively few times or been on a team’s active roster for 45 days or less. “During his time in prison, he has already brought three unsuccessful legal actions (against various corrections officers, prosecutors, and judges). If the dispositions of those cases qualify as strikes under Section 1915(g), Lomax may not now proceed IFP.”

“The courts below ruled that Lomax had struck out,” Kagan continues while continuing to extend the metaphor.

Not all appeals courts, however, accept the logic used by the 10th Circuit. Had Lomax’s lawsuit been filed in a separate judicial district, he might well have never been before the Supreme Court because his cases might have plausibly made their way past the trial courts.

“The Courts of Appeals have long divided over whether a dismissal without prejudice for failure to state a claim qualifies as a strike under Section 1915(g),” Kagan explains–justifying the Supreme Court’s intervention in the present case. “In line with our duty to call balls and strikes, we granted certiorari to resolve the split.”

Invoking language made famous by Chief Justice John Roberts during his confirmation hearings, the justice’s use of the oft-criticized “balls and strikes” line–a politically-loaded presumption about the role of a judge in society which is indicative of the conservative textualist/originalist judicial movement–elicited at least one groan.

Kagan maintains the metaphor to explain the court’s rationale:

This case begins, and pretty much ends, with the text of Section 1915(g). Under that provision, a prisoner accrues a strike for any action “dismissed on the ground[] that it . . . fails to state a claim upon which relief may be granted.” That broad language covers all such dismissals: It applies to those issued both with and without prejudice to a plaintiff’s ability to reassert his claim in a later action. A strike-call under Section 1915(g) thus hinges exclusively on the basis for the dismissal, regardless of the decision’s prejudicial effect. To reach the opposite result—counting prejudicial orders alone as strikes—we would have to read the simple word “dismissed” in Section 1915(g) as “dismissed with prejudice.” But this Court may not narrow a provision’s reach by inserting words Congress chose to omit.

“The text of the PLRA’s three-strikes provision makes this case an easy call,” the opinion concludes–again bringing to mind the notion of an umpire-like function of a judge. “A dismissal of a suit for failure to state a claim counts as a strike, whether or not with prejudice.”