Kavanaugh Open to Miranda Violations as Basis for 1983 Claim 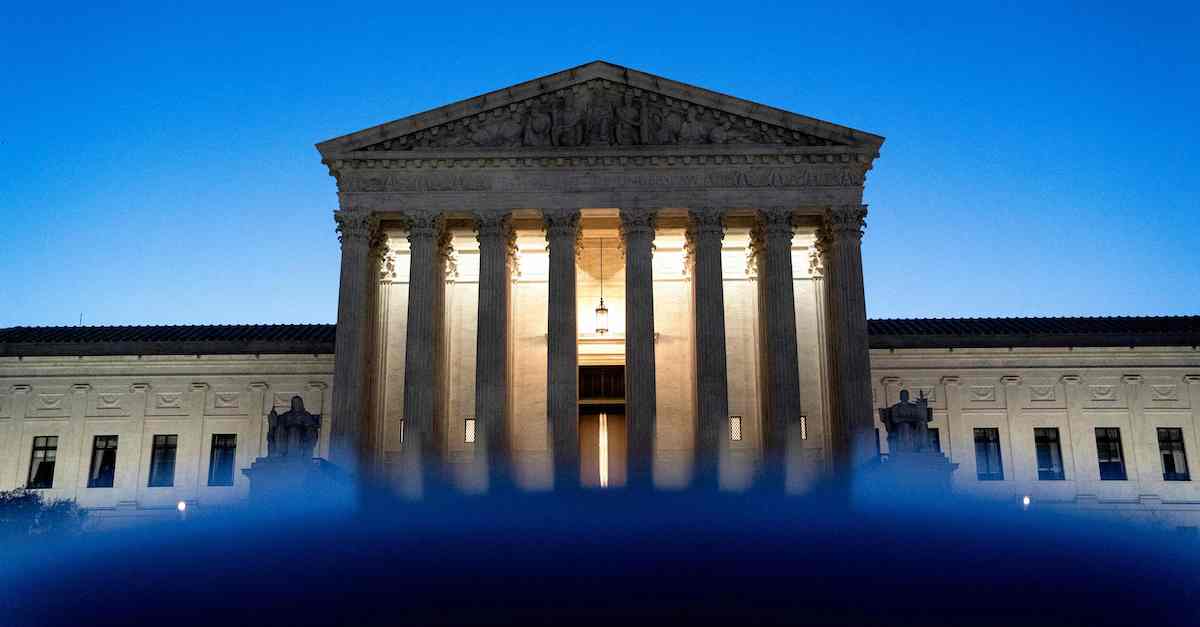 The time-honored protection of the Miranda warning has been a staple of U.S. civil liberties since a Supreme Court ruling created the requirement in 1966. More than a half century later on Wednesday, the high court considered during oral arguments whether a police officer’s violation of the dictate can give rise to civil liability.

In the case stylized as Vega v. Tekoh, the nine justices will consider a dispute between an acquitted California resident and the police officer who failed to Mirandize him and who allegedly coerced a false confession during the process of an initial interrogation.

The respondent, Terence Tekoh, an immigrant from Cameroon, was working as nursing assistant at a Los Angeles medical center when he was accused of sexual assault by a patient. The patient claimed Tekoh lifted her sheets and touched her vagina while transporting her within the hospital. The allegation was reported to the Los Angeles Sheriff’s Department, and Deputy Carlos Vega responded to investigate.

What happened in the room, however, is hotly disputed. Tekoh claims he was forced into writing a false confession after Vega used profanity, racist slurs, threats to deport him and his family, lies about having video of the alleged sexual assault, and a threat of violence by Vega touching his gun when the immigrant refused to confess–all over the course of an hour or so. Vega claims Tekoh requested a private meeting with him and then voluntarily confessed.

Tekoh was vindicated twice at trial. The government’s first effort to convict him ended in a mistrial when prosecutors broke the law by not handing over exculpatory DNA evidence to the defense. Tekoh was acquitted by a jury the second time around. In both instances, the prosecution introduced the disputed confession which all sides agree was obtained without the required Mirandawarnings.

Tekoh sued Vega and several Los Angeles County officials and entities, seeking a jury instruction that would have allowed jurors to allow find the deputy liable under a 1983 deprivation of rights claim if they found, by a preponderance of evidence, that Vega violated Tekoh’s Fifth Amendment right against self-incrimination. The absolved nursing assistant lost at the district court level but won before the U.S. Court of Appeals for the Ninth Circuit.

“[W]e conclude that where the un-Mirandized statement has been used against the defendant in the prosecution’s case in chief in a prior criminal proceeding, the defendant has been deprived of his Fifth Amendment right against self-incrimination, and he may assert a claim against the state official who deprived him of that right under § 1983,” a three-judge panel said, the upshot being that Vega could be sued for his failure to provide the constitutionally-mandated warning.

The full Ninth Circuit denied a request from the deputy for a rehearing en banc. Donald Trump-appointed Judge Eric Miller penned a concurrence that has been praised by legal scholars for its lucidity.

Vega then appealed to the Supreme Court.

In legal terms, the nation’s high court will decide whether Miranda warnings are part of a substantive Fifth Amendment right under the U.S. Constitution. The implications of their decision could lead to additional remedies under the federal Civil Rights statute contained at 42 U.S.C. §1983 or to Miranda rights being cabined and clawed back.

Law enforcement officers are required to give Miranda warnings to criminal suspects in their custody before they can question those suspects about the suspected crime. These warnings derive their name from the 1966 Supreme Court case Miranda v. Arizona, which held that in order to protect a suspect’s Constitutional rights against self-incrimination, the suspect must be made aware of those rights.

In most jurisdictions, the consequences of an officer failing to give proper Miranda warnings are evidentiary in nature. A confession elicited without a voluntary and knowledgeable waiver of the warnings will typically be suppressed at trial. In Tekoh’s case, however, the prosecutor sought to use, and the judge twice allowed, the un-Mirandized statement to be introduced and used against him at trial.

The so-called “prophylactic” and evidentiary remedy failed Tekoh in his lengthy experience with the U.S. legal system, attorney Paul Hoffman noted during oral arguments on Wednesday.

“Clearly that isn’t a clear remedy,” he told Justice Brett Kavanaugh. “His life was destroyed by these actions.”

The heart of the aforementioned concurrence by Judge Miller is also, more or less, Tekoh’s basic theory of the case:

[W]e must “follow the case which directly controls.” Here, that case is Dickerson, which proves that Miranda announced a constitutional rule. We know that not just because of what the Court said—“Miranda announced a constitutional rule,”—but because of what it did: strike down an Act of Congress purporting to abolish Miranda. If Miranda is not “secured by the Constitution,” then why is Congress not allowed to dispense with it?

Under 42 U.S.C. §1983, private plaintiffs can bring lawsuits for damages against state officials who deprive them of “any rights, privileges, or immunities secured by the Constitution.” Under Third, Fourth, Seventh, and Ninth Circuit precedent, a Miranda violation is a Fifth Amendment violation giving rise to such a lawsuit.

The justices had some trouble with this line of thought.

“Why is [Miranda] not a right secured by the Constitution and hence actionable under 1983?” Justice Clarence Thomas asked.

Attorney Roman Martinez, arguing for Vega, replied that Miranda “has constitutional status [and] underpinnings,” prompting Thomas to quickly ask: “What does that mean?” The attorney replied that all Dickerson did was make it so that Congress cannot pass a law to remove Miranda protections.

“How could something–how could a rule be both prophylactic and constitutional?” an apparent unconvinced Thomas pressed.

Chief Justice John Roberts had similar misgivings. In his first question for Vega’s attorney, he focused on the language of §1983.

“Now under Miranda you have a right not to have unwarned confessions admitted into evidence,” the chief justice noted. “You wouldn’t have that right if it weren’t for the Constitution, so why isn’t that right one ‘secured by the Constitution’?”

Justice Elena Kagan repeatedly suggested throughout her questioning that Vega’s position was likely to “undermine” the Dickerson precedent–even though the deputy has been careful to not explicitly ask the Supreme Court to overturn that prior ruling. She also said that the deputy’s reliance on post-Dickerson jurisprudence wasn’t very helpful to his case because his major argument against fulsome Miranda rights comes from a plurality opinion.

Justice Amy Coney Barrett, while clarifying that Vega is not asking the court to overturn Dickerson, offered perhaps the most enthusiastic reading of the petitioner’s legal argument on Wednesday.

“Correct,” a pleased Martinez said in response to Barrett’s summary.

While the justices largely took issue with Vega’s take on the law, they appeared all-but entirely perplexed by Tekoh’s facts.

Thomas grilled Hoffman as to whether there have “been any findings by the jury” that Vega actually lied about the confession.

The respondent’s attorney repeatedly struggled to describe the admittedly “complex” procedural history of the case.

But many of the justices seized upon that tortured history to express obvious misgivings with Tekoh’s argument.

Justice Sonia Sotomayor was skeptical of the theory advanced, saying she had “tried in vein” to find it in lower court proceedings and failed. She also noted that Tekoh had previously lost a case where he claimed that Vega had fabricated the confession.

“If they found that he didn’t fabricate the statements by your client, that was the whole basis of the decision about there, A, not being coercion or, B, that he wasn’t in custody,” Sotomayor said.

Hoffman was adamant that was not, in fact, dispositive here.

“[W]hether the report was fabricated or not doesn’t affect the Miranda violation,” he argued. “It could be a true statement.”

The procedural history resulted in substantial back-and-forth as Hoffman attempted to fend off a series of additional questions. During those exchanges, Justices Stephen Breyer, Barrett and Sotomayor registered discomfort with Tekoh’s efforts to dispute Vega’s version.

Justice Brett Kavanaugh offered Hoffman perhaps the easiest line of questioning when he presented Vega’s argument as an effort to “accept it,” in reference to Dickerson‘s holding that Miranda is a rule but not a right, “but don’t extend it, if I could boil it down, accept it but don’t extend it.”

“We’re not talking about an extension of the Miranda rule,” Tekoh’s attorney said. We’re talking about the core principle of the Miranda rule, the introduction of a custodial statement in the prosecution’s case-in-chief….the Fifth Amendment right is one of the fundamental rights in the Constitution and Bill of Rights. Why would you exclude this if a police officer causes someone to be subjected to it?”

Kavanaugh then mused, audibly couching himself as a devil’s advocate, that Vega and the Biden administration, by way of Assistant to the Solicitor General Vivek Suri, claim “a violation of the right is fully remedied by the exclusion of the evidence at trial.”

To which Hoffman replied:

But — but — but, clearly, that isn’t a complete remedy. I’m standing here on behalf of — of Mr. Tekoh, who was acquitted and has absolutely no other remedy than a Section 1983 violation. His life was destroyed by these actions. He gets acquitted. When the full story comes out, he is contending that the officer set him up for this and basically set up the prosecutor and the — and the court too. What remedy does he have? That’s what Section 1983 is for.

Justice Neil Gorsuch gave little away by keeping his questions limited to the attorneys’ perspectives on an historical amicus brief that argues Miranda is actually a much older concept than previously thought. That brief argues the provenance of the right dates back to the mid-1700s.

Justice Samuel Alito only spoke up once to question the Department of Justice attorney by offering a hypothetical where a police officer violates a constitutional right and a prosecutor later tries to gain an advantage at trial. Asking for a clear rule from the government, Suri disputed the framing of the question.

“We don’t accept that the police officer has done anything unlawful,” the DOJ lawyer argued.

The Biden administration’s position is that the Miranda warning can only be used as an evidentiary remedy.

Hoffman hotly disputed the government’s and the deputy’s efforts to limit Miranda in such a fashion.

“You can’t allow officer misconduct that deceives the circuit breakers in the system,” he argued. “If the officer actually causes the person to be subject to the violation, which is the language of 1983, by deceiving the prosecutor, that should be at least one of the circumstances where [a lawsuit] should happen.”