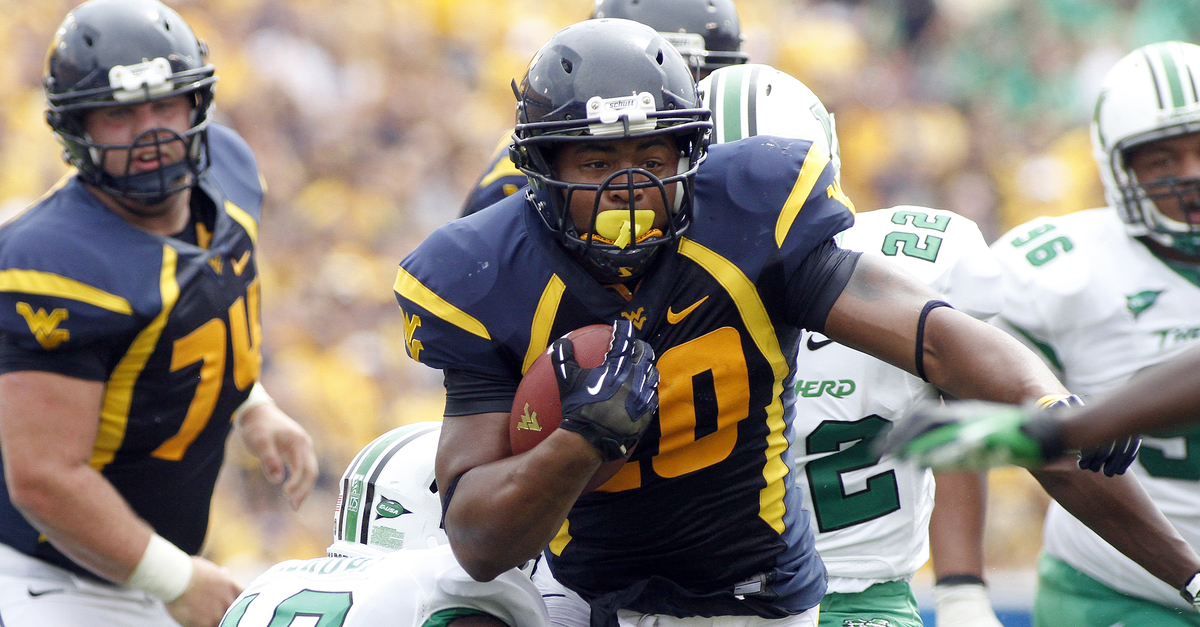 Shawne Alston #20 of the West Virginia Mountaineers carries the ball against the Marshall Thundering Herd during the game on September 1, 2012 at Mountaineer Field in Morgantown, West Virginia.

The Supreme Court of the United States granted certiorari Wednesday in two cases in which former college football player Shawne Alston was named as the lead plaintiff in the lower courts; the cases will test the legality of the NCAA’s “amateurism” rules. These prohibitions against student athletes receiving computers, science equipment, musical instruments, and certain other items from schools, have created a system that a Ninth Circuit judge described as, “the result of a cartel of buyers acting in concert to artificially depress the price that sellers could otherwise receive for their services.”

The two cases, NCAA v. Alston, and Am. Athletic Conference v. Alston, involved Division I football and basketball players who sued the NCAA and multiple collegiate conferences under the Sherman Antitrust Act. The justices will next decide how much, if any, of the NCAA’s amateurism rule against student benefits can legally remain in effect.

Both the district court and the Ninth Circuit ruled in favor of Alston and the other student athletes, holding that NCAA limits on student benefits constituted an unreasonable restraint of trade and violated federal anti-monopoly laws.

The cases raise not only the practical questions of fairness for the treatment of collegiate athletes, but also whether legal precedent should evolve to reflect American values toward college sports. A 1984 case upheld NCAA prohibition against compensation and requirements for attending class, reasoning that in the context of college sports, antirust rules should not be applied in the traditional manner.

The student athletes now urge a re-thinking of the application of legal rules based on common sense. The question, as explained in their brief to the Supreme court, is one of fundamental fairness:

“In the last 36 years, Division I basketball and Football Bowl Subdivision (“FBS”) football have become multi-billion dollar industries. The NCAA and its member conferences and schools receive billions of dollars every year through the hard work, sweat, and sometimes broken bodies of student-athletes. Coaches, assistant coaches, and athletic directors take millions in salaries. Yet the schools have agreed among themselves to limit what student-athletes may receive for their work in generating these extraordinary revenues.”

The relief sought by the athletes isn’t an upending of all the NCAA’s amateurism rules, but just a few that have a direct and meaningful impact on the lives of students. The so-called “pay for play” rule is not being challenged, nor are litigant athletes asking the Court to require colleges to dole out benefits. Furthermore, individual conferences could still retain the right to choose for themselves which benefits would be allowed.

“In short,” the athletes argue, their proposed change “simply enables individual schools and conferences to compete among themselves.”

“There is no reason to believe,” they continue, “that eliminating restraints on education related benefits will ‘fundamentally transform the century-old institution of NCAA sports.'”

Lawyers even adjusted their argument for COVID-19, noting that, “FBS football and Division I basketball mirror their professional counterparts in nearly all respects—including by paying coaches and executives seven-figure salaries and playing games for television audiences in the midst of a pandemic,” and accusing the NCAA of clinging to “the pretext of ‘amateurism,'” despite it having no impact 0n consumer demand.

By contrast, the NCAA argues that the Ninth Circuit’s decision below conflicts with decisions of other circuits. Furthermore, they argue, the Ninth Circuit got it wrong in basing its decision in the erroneous belief that professional athletes receive “unlimited compensation” for their playing. Any decision that disallows the NCAA to limit school-granted benefits, the NCAA argues, “will fundamentally transform the century-old institution of NCAA sports, blurring the traditional line between college and professional athletes.”