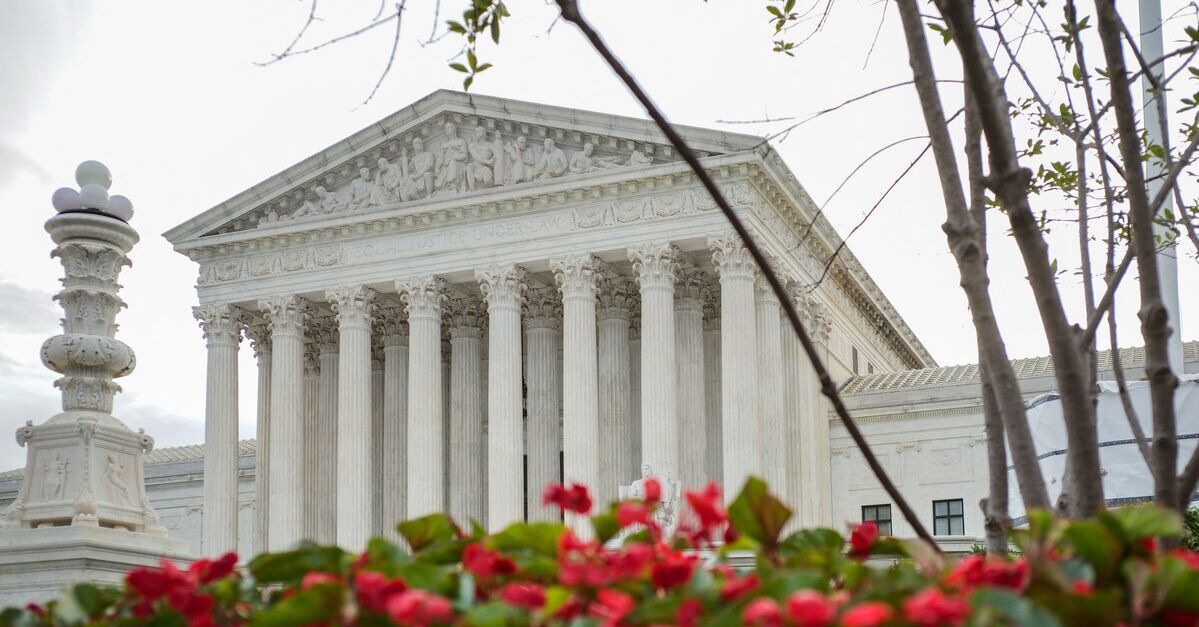 The Supreme Court of the United States on Monday heard oral arguments in a case involving a Southwest Airlines employee who claims she was stiffed by the Dallas-based company on wages and unpaid overtime.

The case, Southwest Airlines Co. v. Saxon, was the second matter on Monday from which Justice Amy Coney Barrett recused herself for having taken part in lower court proceedings.

The case is the latest in a string of forced arbitration disputes to reach the nation’s highest court under the Federal Arbitration Act (FAA). The justices were asked to consider whether an airport cargo-loading supervisor is considered an “interstate commerce” worker and therefore entitled to a carve-out from the clause in her contract.

Latrice Saxon works at Chicago Midway Airport as a supervisor for ramp agents who load and unload planes with luggage and cargo. She previously filed a federal wage-and-hour claim for unpaid overtime, and Southwest moved to dismiss on the grounds that Saxon’s contract says she must submit to private arbitration instead of using civil litigation to resolve the wage claim.

The FAA generally upholds arbitration agreements like the one at issue. Saxon, however, argues that she is a “worker…engaged in commerce” and subject to an exemption carved out by the FAA for contracts with “seamen, railroad employees, or any other class of workers engaged in foreign or interstate commerce.” The U.S. Court of Appeals for the Seventh Circuit previously sided with Saxon.

Southwest appealed on the grounds that the exception only applies to interstate “transportation workers,” a term developed by courts which, notably, does not appear in the statute itself.

In response to a series of probing questions from Chief Justice John Roberts about the function that crossing borders plays in the airline’s preferred legal test, attorney Shay Dvoretzky outlined Southwest’s general theory of the case as having to do with class characteristics and what makes a “typical” worker in cases like this.

Dovretzky likened the test the airline wanted to a dissent from the Ninth Circuit regarding “dull knives,” saying that “knives, as a class, are sharp” and that while “you might have a dull knife, it’s still a knife.”

“You might have a seaman who doesn’t cross borders,” Dvoretzky went on, but said seaman as a class have a “central characteristic” which is to travel on ships “typically across borders.”

Justice Neil Gorsuch was skeptical of Southwest, suggesting an analogy he said was fatal to the company’s position.

“What about the fella who unloads cargo that’s come in interstate commerce from the railroad and then hands it off to a carrier locally?” the textually-inclined justice asked. “That person. And if that person was exempted by the act, then why isn’t the same person unloading cargo from a plane in the same position?”

Dvoretzky replied that he didn’t believe such a railroad employee would be entitled to an arbitration exemption under the Federal Arbitration Act.

“What evidence do you have of that?” Gorsuch said, while repeatedly cutting off Dvoretzky as he attempted to answer. In the end, the attorney responded to Gorsuch, saying: “No, I don’t have any evidence.”

Gorsuch then posed a related question, asking: “Why wouldn’t we naturally understand someone who is loading and unloading cargo from interstate commerce as being involved in interstate commerce within the meaning of this act, narrowly, as a class of persons?”

The lawyer paused for several seconds before calling that interpretation of the statute “sweeping” and earning himself an instant retort–and yet another interjection from the bench.

“You can call it ‘sweeping,’ you can call it ‘narrow,’ whatever adverb or adjective you want to attach to it,” Gorsuch said. “Why wouldn’t that be an appropriate reading of the statute, counselor?”

Dvoretzky replied that the context of railroad workers being next to seamen in the statute should inform the understanding.

Justice Brett Kavanaugh picked up on that logic and asked about a prior court decision that dealt with “in commerce” language.

“It is too plain to require discussion that the loading or unloading of an interstate shipment by the employees of a carrier is so closely related to interstate transportation as to be practically a part of it,” he said, reading from a 1924 case, later saying that language suggested Supreme Court precedent and understanding on point.

Dvoretzky said that case was discussing a different issue and law, and that since the context was different, it shouldn’t apply here.

After another harsh round of questioning from Gorsuch, Kavanaugh appeared unsatisfied with the airline’s arguments and wanted to know why “railroad employees” doesn’t just mean railroad employees.

“Are you acknowledging that if railroad baggage handlers are covered, then you lose?” she asked, before answering her own question. “There’s no way to separate those two out, is there?”

Dvoretzky said they could be separated but quickly pivoted to saying Congress didn’t mean to exempt “the entire airline industry.”

Justice Clarence Thomas was skeptical of the airline’s claim that seamen, as a class, must travel to be covered while also a particular seaman need not cross borders to be covered and wondered what use such a test was. The justice then brought up the example of tugboat operators, who never or seldom cross borders, and asked where they would fall. Dvoretzky replied that they would be categorized as seamen because they pass the class characteristics test.

“Isn’t that an odd way to create a class?” he asked.

Kagan and Kavanaugh both quizzed Dvoretzky again, and again seemed unsatisfied with his answers.

In response to a question as to whether railway signal operators are railroad employees for purposes of the exception, Dvoretzky replied in the negative. This prompted Kagan to note that the train doesn’t move unless those operators “say red light, green light.” Dovretzky then compared signal operators to travel agents.

“So the test is ‘are you moving?'” Kagan asked.

“The test is are you moving on the ship, the plane, the truck through the channels of interstate commerce,” Dvoretzky replied.

Kavanaugh, finishing up the court’s dissection of Southwest’s position, noted that several prior precedents cite loading and unloading as being engaged in interstate commerce. The airline’s attorney said those cases are different and shouldn’t count because they concerned dormant commerce clause issues.

The justice asked if “everyone who works” for a shipping or “ocean liner company” would be covered by the law here as seamen. The worker’s attorney replied that the exception should apply to those “who do the customary work,” but Alito quickly rejected this formulation and said that “a lot of people” do the customary work of such a company, wondering why seamen are listed in particular. Bennett replied that seamen were on Congress’s minds for other reasons but noted that their direct inclusion in the statute was largely immaterial due to the language about other workers in “commerce.”

Justice Sonia Sotomayor, following up on an Alito question about who would not be covered, asked about the website operator for an airline. Bennett says such employees probably are but admittedly on the “outer edge” of who would be covered under the FAA’s exemption.

“Cargo loaders on the other hand, are the core,” the worker’s attorney argued.

Bennett went on to say that Southwest’s theory would likely fail to account for load masters who balance the weight an airplane can carry, as well for lag men on railroads and baggage handlers.

She was then asked by Alito and Kagan, in turn, to formulate tests that would solve the issue. The attorney’s answered prompted a flurry of discussion from the justices about where Amazon might fall.

“It doesn’t sound like a narrow group to me,” the chief justice said. Bennett replied that “obviously retail warehouse workers” are not covered by the exemption and drew a distinction between retail and freight warehouses. In response to a follow-up question from Roberts, Bennett replied that UPS and FedEx would both be covered and that there is precedent that already supports such an understanding.

Justice Stephen Breyer latched onto the Amazon question and asked about other businesses, like department stores, who do their own shipping. Bennett said this has already been addressed by cases about public shipping and inter-company shipping operations and likened the issue to how coal companies used to have their own railroads.

Alito then accused Bennett of shifting “back and forth” and made clear his slippery slope concerns, saying the attorney’s definition is too expansive and “could include just about any commercial activity.”

“We’re talking about the classes of workers that are specific to the industry,” Bennett said, apparently attempting to clarify by addressing that direct question as well as repeated concerns about what sorts of office employees for railroads and airlines would not qualify for the exemption under the FAA.

“Southwest has offered no evidence, at all, from any time period, either about what the phrase ‘engage in interstate commerce means’ or the phrase ‘seamen or railroad employees’ means to show that these words are limited to people who are aboard a vessel crossing state lines,” Bennett summed up.

Dvoretzky, on rebuttal, suggested that railroad employees, and by extension, employees like Saxon, are defined much more narrowly to include only employees engaged in the “movement of any train” and people “who served on rail cars.”

“Does the class of workers predominantly work on the plane or the train?” the Southwest attorney asked. He ended by saying the relevant inquiry is a question of the flight crew versus ground crew.

“Flight crew are analogous to seamen, ground crew are not,” he said, hoping the justices would accept that frame as the basis for a “clear rule” that is “also consistent with [Congressional] purpose.”