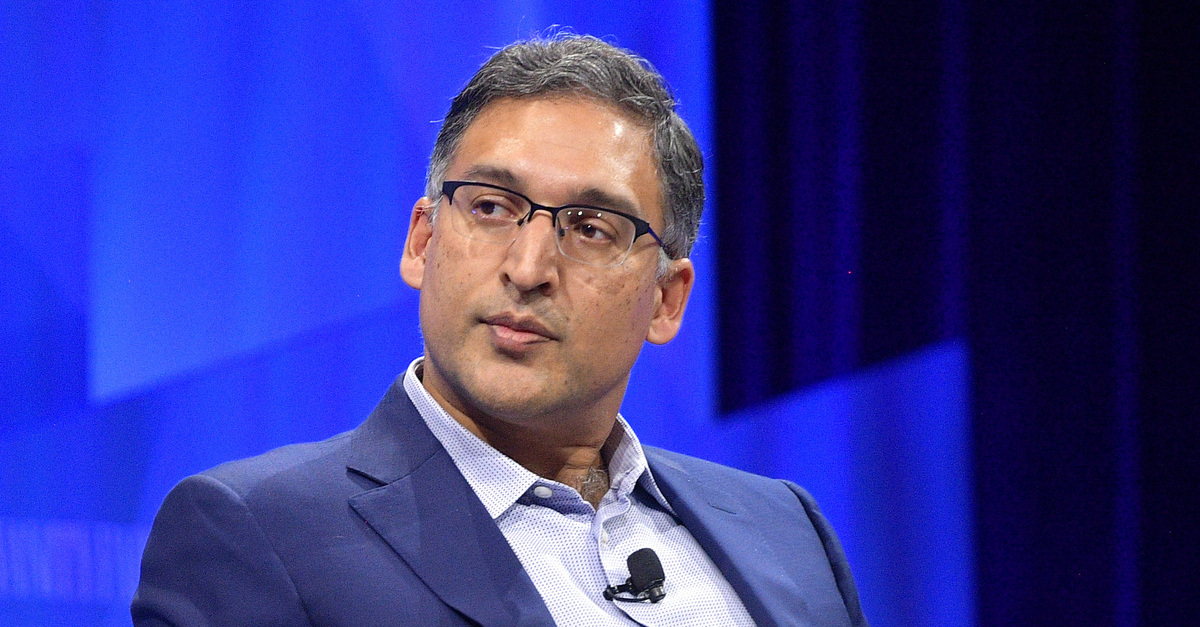 BEVERLY HILLS, CALIFORNIA – OCTOBER 22: Neal Katyal, former Acting Solicitor General of the United States speaks onstage during ‘Legend Has It: Activism and Influence in the Age of Trump’ at Vanity Fair’s 6th Annual New Establishment Summit at Wallis Annenberg Center for the Performing Arts on October 22, 2019 in Beverly Hills, California.

Throughout the proceedings, most of the nine justices appeared skeptical of Katyal’s arguments on behalf of his corporate clients. But attorney Paul Hoffman, representing several former child slaves, often struggled before the high court himself–leaving the ultimate adjudication of the likely-to-be influential case anyone’s guess.

In two consolidated cases stylized as Nestlé USA v. Doe I and Cargill, Inc. v. Doe I, former child slaves forced to work on cocoa farms in the Ivory Coast sued the companies in their corporate forms for aiding and abetting slave labor under the Alien Tort Statute (ATS) of 1798.

Passed by the very first U.S. Congress, the ATS authorizes federal courts to effectively craft or sanction novel causes of action so long as the underlying activity–the bad behavior alleged–violates international law. Another way to think about the ATS is that it is one of a small number of U.S. legal instruments that can be used to assert universal jurisdiction over violations of international law. At root, the law allows non-U.S. citizens an avenue for redress that would otherwise be unavailable to them in the U.S. legal system.

The facts of the cases are largely not disputed and were previously summed up by the Ninth Circuit Court of Appeals:

Child slavery on cocoa farms in the Ivory Coast, where seventy percent of the world’s cocoa is produced, is a pervasive humanitarian tragedy.

[The corporations] operate with the unilateral goal of finding the cheapest source of cocoa in the Ivory Coast. Not content to rely on market forces to keep costs low, defendants have taken steps to perpetuate a system built on child slavery to depress labor costs. To maintain their supply of cocoa, defendants have exclusive buyer/seller relationships with Ivory Coast farmers, and provide those farmers with financial support, such as advance payments and personal spending money. 19 Malian child slaves were rescued from a farm with whom Cargill has an exclusive buyer/seller relationship. [The corporations] also provide tools, equipment, and technical support to farmers, including training in farming techniques and farm maintenance. In connection with providing this training and support, defendants visit their supplier farms several times per year.

“Defendants were well aware that child slave labor is a pervasive problem in the Ivory Coast,” the court continued. “Nonetheless, defendants continued to provide financial support and technical farming aid, even though they knew their acts would assist farmers who were using forced child labor, and knew their assistance would facilitate child slavery. Indeed, the gravamen of the complaint is that defendants depended on—and orchestrated—a slave-based supply chain.”

With the facts more or less firmly not in their favor, the corporations and their legal representatives–who both appealed appellate decisions against them–were left arguing that the ATS precludes such a lawsuit because, over the years, the Supreme Court has read in a presumption against extraterritorial application of the statute.

In Supreme Court terms, the question presented is whether or not the ATS’s judge-made presumption against extraterritoriality can be overcome by a claim asserting that a domestic corporation aided and abetted a globally-condemned foreign violation–child slavery.

Katyal’s strategy throughout the proceedings was to blur the lines between who should be liable.

“You can go after the individual,” he argued at one point in response to a question about corporate liability from text-centric Justice Neil Gorsuch. “So, you don’t need to go after the corporations.”

The specific argument advanced by the former Obama administration alum on behalf of his multinational employer is that there is no “specific, universal, and obligatory norm” that supports corporate liability for child slavery violations.

Katyal said that a corporation “requires an individual form of liability under a specific norm of international law.”

“Many of your arguments lead to results that are pretty hard to take,” opined conservative Justice Samuel Alito.

The justice went on suggest that Katyal’s arguments would leave kidnapped children—kept “in bondage on a plantation” in order for a corporation to obtain cocoa “at bargain prices”—without any form of redress under the ATS even though the bad actors made some of those decisions within the United States.

Katyal responded in the affirmative. While answering long-windedly and with multiple points, he clarified that his clients’ position is that “because there is no domestic injury” there is no case under the ATS.

Liberal Justice Stephen Breyer had a hard time swallowing Katyal’s theory that corporations deserve their own special carve-out from the law. While left-of-center Justice Sonia Sotomayor took Katyal to task over the idea that the ATS would not cover aiding and abetting.

“The Alien Tort Statute was once an engine of international human rights protection,” Justice Brett Kavanaugh noted at one point. “Your position would…’gut the statute.’ So why should we do that?”

Katyal responded by laughing at Kavanaugh and accusing him of using “overheated rhetoric.”

The U.S. Department of Justice (DOJ) also appeared and took the side of the corporations during oral arguments on Monday.

The U.S. government’s view, as expressed by Curtis E. Gannon, is that the ATS has no extraterritorial application whatsoever and that U.S.-based corporate entities should never be subject to liability under the ATS for owning slaves outside of the country.

“What’s new about suing corporations?” Breyer asked excitedly at one point–suggesting he finds the governments’ and the corporations’ position in the case somewhat untenable. Breyer went on to note that nearly 200 such lawsuits have been filed under the Alien Tort Statute. “What’s new about it?” he asked again. “Is it a different rule again for partnerships? For limited liability corporations? Why?”

Alito was also askance of the government’s theory. He argued that “if corporations cannot aid and abet then there would only be a sliver” of liability under the fundamental legal concept of respondeat superior, or employer liability for employees’ acts performed on the job.

Paul Hoffman, appearing for the former child slaves, also had his work cut out for him.

While the justices were extremely skeptical of the corporations’ legal arguments, Hoffman struggled at times to convince the court about his case on the specific facts and the impact a favorable ruling for his clients would have.

One highly explosive back-and-forth occurred when Breyer made pains to disrobe the global economy of its marketplace mythology.

“All or virtually all of your complaints amount to doing business with these people,” the justice noted–referring to the slavers. “And that’s about it. And they knowingly do it. Well, unfortunately child labor is terrible but it exists throughout the world in many many places.”

Breyer was concerned as to whether the allegations in the lawsuit actually rise to the level of aiding and abetting because of how much the world’s corporations rely on child slavery and because Congress has an interest in legislating here. He went on to say that if the high court rules in favor of the former child slaves their decision could have “very significant effects” on commerce and Congressional foreign policy.

“That sounds like a business,” the liberal justice shouted out as Hoffman attempted to explain. “A business that does business. Blinking your eyes or open eyes with farmers and others throughout the world who use child labor. In this case, do we want a judge to say ‘you can’t do that anymore?!'”

Sotomayor following up on Alito’s line of questioning. She’s not sure there’s enough facts being pleaded that rise to the level of aiding and abetting here. Hoffman says the corporations had “control.” Sotomayor responds: “I’m not sure what control means.”

Hoffman’s most lucid effort of the day came in response to a question from Kavanaugh where he expressed “concern” about finding “corporate liability in international law [that] is specific and universal.”

Hoffman deftly countered that the ATS is not an international law statute, but rather, a tort statute. He noted that the ATS has been the law of the land since 1789–with the implication being that the Founders probably knew what they were doing.

“Corporate liability is actually the norm,” he said. “Not the exception.”

Katyal, given a brief opportunity for rebuttal, ended his advocacy by invoking the slippery slope.

“The queries today about: ‘How can we exempt corporations? It makes no sense!’ could be said about torture,” he said. “But in [another and entirely separate statute] Congress said there was no liability for corporations [so] defer to Congress.”

“Same with extraterritoriality,” Katyal continued. “Sometimes Congress extends a statute that way–like genocide–sometimes it doesn’t. Nothing in the ATS says it reaches an injury halfway across the globe.”

“Do we want a judge deciding this?” he asked. “My friend’s admission of just how open-ended and transformative his liability would be answers that question.”