When former Trump campaign attorney Sidney Powell filed her much-hyped “Kraken” lawsuit seeking to decertify Georgia’s presidential election results, the conspiracy theory-laden, error-riddled complaint quickly became the object of mockery online. A majority of legal observers criticized the filing for containing a multitude of typos, sloppy formatting, and a dozen references to the late Hugo Chavez, but the lawsuit also included an altered exhibit of significance: a document from Georgia’s Secretary of State Office regarding the certification of Dominion Voting Systems’ voting machines.

The complaint, filed in U.S. District Court for the Northern District of Georgia, claimed that Dominion was “founded by foreign oligarchs and dictators to ensure computerized ballot-stuffing and vote manipulation to whatever level was needed to make certain Venezuelan dictator Hugo Chavez never lost another election.” Powell alleged that Georgia Gov. Brian Kemp and Secretary of State Brad Raffensperger, both Republicans, “rushed through the purchase of Dominion voting machines and software in 2019 for the 2020 Presidential Election,” declaring that “a certificate from the Secretary of State was awarded to Dominion Voting Systems but is undated.”

The complaint also attached a copy of the supposedly undated certificate, stating, “See attached hereto Exh. 5, copy Certification for Dominion Voting Systems from Secretary of State,” though the certificate was actually filed as “Exhibit 6” on the court’s docket. 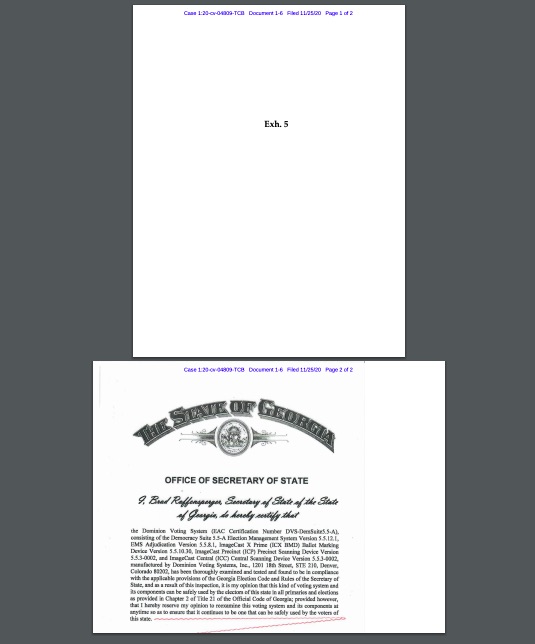 If the Dominion certification page included in Powell’s exhibit appears oddly shaped, as though the bottom quarter of the page were chopped off, that’s because it was. Viewing the full document, which still appears on the Secretary’s website, It’s easy to see why that bottom quarter of the document would have been problematic to Powell’s claims, as it reads, in part: “I have hereunto set my hand and affixed the seal of my office, at the Capitol, in the City of Atlanta, this 9th day of August, in the year of our Lord Two Thousand and Nineteen […].” 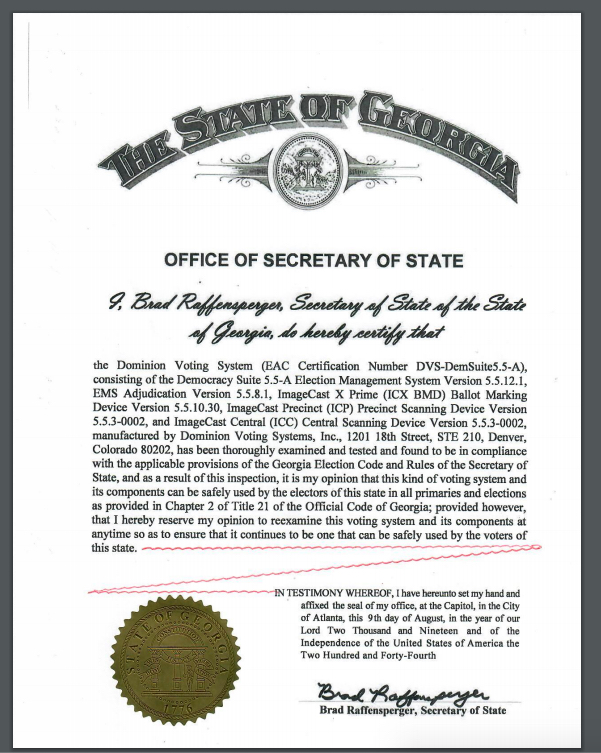 Along with the date (August 9, 2019) and seal, the certification contains Secretary Raffensperger’s signature.

The exhibit metadata shows an author: “hallerjzs.” That person has already been identified as Juli Haller, though her name in the metadata is not dispositive proof of authorship. 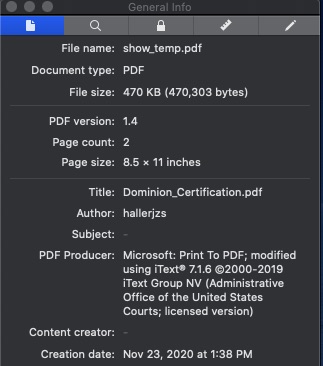 Next up: PDF metadata. The author of the PDF isn't Sidney Powell, it's Juli Haller. Who is Juli Haller? pic.twitter.com/mcphBrpqhD

As previously reported by Law&Crime, Haller describes herself as a former White House liaison who previously “organized events including at Trump International Hotel.” She appears to currently work in the Department of Housing and Urban Development. However, she was named in a report which raised concerns about her treatment of an Iranian-American at the State Department.

In an email to Law&Crime, Powell said the omission of the portion of the document displaying the date of certification was likely the result of “human error.”

“I would imagine it is attributable to human error in the press of time,” Powell said. “We will correct it.”

Attorneys have been generally been reticent to call for sanctions against the attorneys behind the series of pro-Trump lawsuits challenging the election results. Those calls have instead mostly been made within the political sphere. But the altered document—first pointed out by Reuters journalist Brad Heath—may have finally broken the camel’s back.

“That’s not good,” wrote Houston-based appellate attorney Raffi Melkonian. “I’ve been poo-pooing the risk of sanctions, but altering a document to make it seem like something else is squarely in sanctionable territory.”

I've been poo-pooing the risk of sanctions, but altering a document to make it seem like something else is squarely in sanctionable territory.

“That’s exactly what I have been thinking. I don’t agree with weaponizing bar complaints in political disputes but this is way out of that territory,” she wrote, adding, “Yikes.”

That’s exactly what I have been thinking. I don’t agree with weaponizing bar complaints in political disputes but this is way out of that territory. Yikes.

On Tuesday, Powell appealed a federal district judge’s refusal to prevent Georgia counties from making any changes to their voting equipment.