‘Like Learning to Ride a Bike with Everybody Watching’: In Return to Notre Dame, Justice Barrett Discusses ‘Big Shift’ in Life at Supreme Court 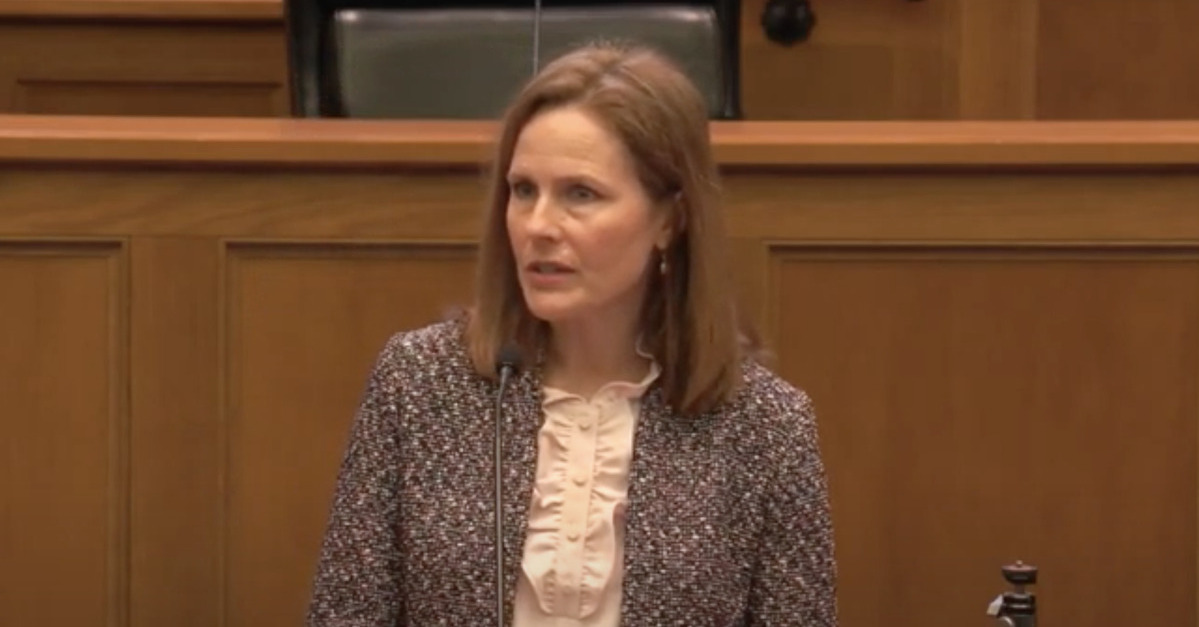 Justice Amy Coney Barrett delivered the keynote address Monday night at the Notre Dame Law School Law Review’s Federal Courts Symposium, returning to the institution where she taught before her ascent to the Supreme Court.

During the hour-long speech, Barrett made several references to her transition from private to public life, remarking that life as a Supreme Court justice was “a lot to get used to.”

“It’s like learning to ride a bike with everybody watching you,” Barrett explained, calling the change a “big shift.”

Barrett made specific reference to the role of the internet as a game-changer for justices. She shared an anecdote about once walking the halls of the Supreme Court building with Justice Sandra Day O’Connor. A tourist approached the justice, asking for directions without having any idea who O’Connor was. Barrett commented that it is much more difficult to be anonymous now, given how often judges’ photos are publicized online.

Barrett also commented on her personal life and its relationship to her work as a justice.

The bulk of Barrett’s talk was devoted to the role of federal courts and the role of equity in judicial decisions. Barrett, who has described her judicial philosophy as “formalist,” warned against a system in which judges have too much flexibility or discretion. Rather, she said, judges should maintain a strict adherence to law. Referencing a pair of statues representing law and equity at the steps of the courthouse, Barrett said the two key concepts are “Both present, sometimes pulling in opposite directions.”

Elaborating on formalism, the justice emphasized the philosophy’s value of fidelity to law above all.

Barrett declined to answer a question about her opinion of district court judges’ authority to issue nationwide injunctions — a topic that has come before the court recently which is likely to come up again.

An anonymous inquirer submitted a question about the late Justice Ruth Bader Ginsburg, asking, “if equity could be shown at the time of the founding to include the power to craft new remedies, would that make Justice Ginsburg a better originalist?” Barrett declined to answer the question directly, but said “that is the dispute between justices Scalia and Ginsburg,” referencing the limits of equity jurisdiction resting with courts.

In response to a question about circuit splits, Barrett commented, “Judges aren’t automatons.”

Barrett, who clerked for U.S. Circuit Judge Laurence Silberman (a George W. Bush appointee) as well as for Justice Antonin Scalia long before becoming a judge herself, characterized relationships between clerks and judges much like the relationships between parents and children. Just as parents become the model for acceptance or rejection of some values, judges set the “baseline” of what clerks know.

One attendee asked the justice whether she considers the immediate national audience that consumes her published opinions during the drafting process. Barrett answered that she does try to keep that audience in mind and attempts to make her opinions “as accessible as possible” for non-lawyers to digest, qualifying that there are limits to making complex legal doctrines accessible to those without legal training.

Barrett did not comment on the upcoming retirement of her fellow associate justice Stephen Breyer. To the newest justice’s credit, the public also knows what she said at the event.