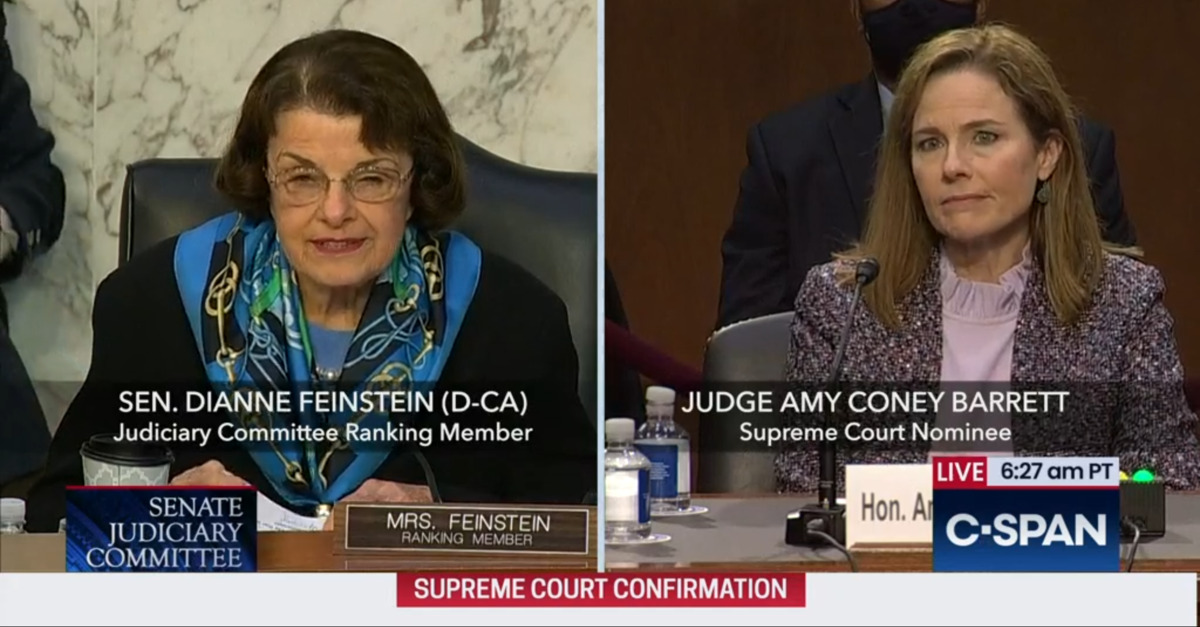 “What do you think of all that?” a smiling Feinstein asked the somewhat confused circuit judge–before clarifying that she wanted an answer about the basic legal concept known as severability in the context of a case that many conservatives hope, and that many liberals fear, could be the end of the Affordable Care Act (ACA).

To which Barrett replied:

I think the doctrine of severability as it has been described by the [Supreme] Court serves a valuable function of trying not to undo your work when you wouldn’t want a court to undo your work. Severability strives to look at a statue as a whole and say: “Would Congress have considered this provision so vital that–kind of in a Jenga game–pulling it out, Congress wouldn’t want the statute anymore?”

So, it is designed to effectuate your intent.

Severability is designed to say: “Well, would Congress still want the statute to stand even with this provision gone?”; “Would Congress still have passed the same statute without it?” So, I think insofar as it tries to effectuate what Congress would have wanted, it’s the [Supreme] Court and Congress working hand-in-hand.

Feinstein was visibly moved by the conservative law professor’s studied command of the rudimentary concept.

“Thank you!” she said. “That’s quite a definition. I’m really impressed. Thank you.”

But the effusive response earned Feinstein nothing but scorn online.

“[T]his is the ranking Democrat on the Senate Judiciary Committee being blown away by a Supreme Court nominee’s description of a concept that literally every second year law student understands,” noted left-wing Twitter personality and 5-4 podcast host The Lawboy in a viral tweet.

But that tweet was merely emblematic of the genre.

“From a lawyer’s perspective, this is the equivalent of getting a pat on the back for opening Dianne’s pdf in a timely manner,” tweeted attorney and Current Affairs staff writer Vanessa A. Bee.

Such hits against the Golden State senator kept up apace:

THIS is the kind of leadership Dems need in the Senate!!!!

The outrage at Feinstein’s cheery embrace of the conservative nominee’s legal bona fides was palpable–marking the second time this week that the octogenarian California Democrat was upbraided by liberals and leftists over the Barrett nomination.

Underlying the optical own-goal feel of Feinstein’s back-and-forth is where the most-shared version of the clip originated: Sen. Mitch McConnell‘s (R-Ky.) staff shared it as a rapid response blast to undercut the Democratic Party’s narrative against Barrett.

Some legal experts aren’t quite convinced that Obamacare actually is in jeopardy, but Senate Democrats have hinged much of their opposition to Barrett on the grounds that she would vote to invalidate the important and wide-ranging health insurance law. So, Feinstein giving Barrett credit specifically on the subject of Obamacare was a puzzling choice that was all-but certain to attract negative attention.