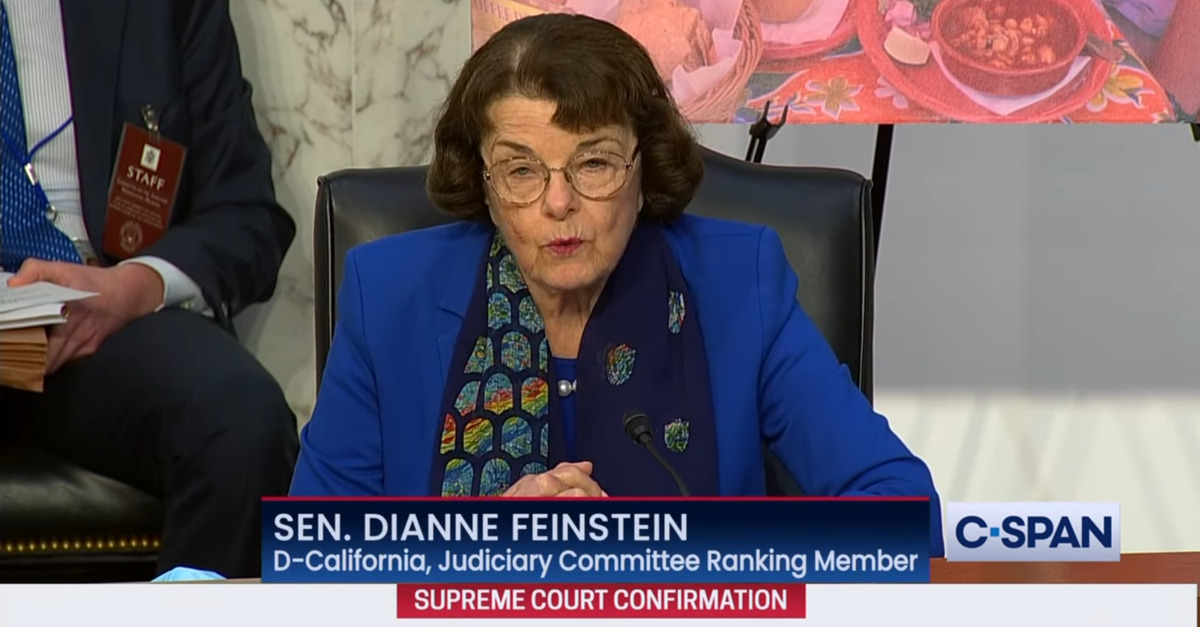 “Ninety percent of Feinstein’s opening statement treated Barrett as a normal nominee going through a normal hearing,” noted legal writer Mark Joseph Stern via Twitter. “A total failure of Democratic leadership to frame these hearings as a dangerous, unprecedented affront to the Supreme Court’s legitimacy.”

The ranking member, 87, spent the overwhelming majority of her introductory statement previewing a widely-held belief among Democrats that Barrett would likely vote to overturn the Affordable Care Act (ACA) in a case scheduled to be heard by the nation’s high court on November 10–exactly one week after Election Day.

“The Supreme Court will hear hearings in Texas v. California, a case brought to strike down the ACA,” Feinstein warned. “The president has promised to appoint justices who will vote to dismantle that law. As a candidate, he criticized the Supreme Court for upholding the law and said, and I quote: ‘If I win the presidency, my judicial appointments will do the right thing unlike Bush’s appointee John Roberts on Obamacare.’ And when he appointed Judge Barrett to fill justice [Ruth Bader] Ginsburg‘s seat, the president said eliminating the Affordable Care Act would be quote: ‘A big win for the USA.'”

Feinstein went on to note that Barrett has–like the president who nominated her–similarly criticized Roberts for his vote to uphold the ACA in the 2012 case of National Federation of Independent Business v. Sebelius, saying that she believed the chief justice pushed the law “beyond its plausible meaning to save the statute.”

But harping on ever-present Democratic fears regarding a potential 6-3 conservative majority’s rulings on issues like Obamacare isn’t what progressives and left-of-center court watchers were hoping for from Democrats during the morning session. Since being tapped to fill the vacancy left by the the late feminist icon, many liberals have been resolute that Barrett’s nomination is itself a “sham.”

Deriding the process as all-but illicit, liberal judicial advocacy groups have bemoaned the decidedly rushed nature of Barrett’s movement through the usual hoops of the usually glacier-paced Senate and complained that Republicans have deprived the country of the time needed to “review a nominee’s record and determine their fitness for a lifetime appointment to our nation’s highest court.”

In fact, Feinstein’s ability to handle the hearings—specifically, the ability to go on offense and call out the proceedings as illegitimate–has been severely trashed and questioned by Democratic Party insiders.

“She’s not sure what she’s doing,” an anonymous Democratic recently senator said of Feinstein. “If you take a look at [Brett] Kavanaugh, we may be short two senators because of that. And if this gets [messed] up, it may be the same result.”

Those fears apparently came to fruition on Monday morning.

“Feinstein up now and is gonna play along with this nonsense I guess,” said attorney and journalist Jessica Mason Pieklo via Twitter. “Feinstein doing an excellent job demonstrating what failed opposition leadership looks like.”

Instead of focusing on issues and the likely impact of Barrett being confirmed, many observers wanted Democrats to entirely torch the nomination hearings as an affront to the norms of the Senate–and as a hypocritical violation of the GOP’s own alleged posture during the final years of Barack Obama’s presidency when the Republican-held Senate sat on Judge Merrick Garland’s nomination and–because the White House failed to push back whatsoever–effectively killed it.

“Feinstein hopes that these hearings will shed some light on whether or not ACB will gut the Affordable Care Act if confirmed and lists all that is at stake if so,” Pieklo continued. “This is not effective opposition in any definition of the word.”

While an eventual justice Barrett is largely acknowledged to be a fait accompli at this point, observers worried about the conservative nominee’s upcoming jurisprudence wanted at least a bit of fight from the putative opposition party surrounding those normative and procedural issues. The Democrats, however, acting with the Judiciary Committee’s ranking member as their lodestar, appeared to fall far short of such expectations among constituents.

“There’s not a lot that Democrats can do to actually BLOCK this nomination but Feinstein giving this any air of legitimacy is a complete failure of leadership,” Pieklo added.

Feinstein raised eyebrows during Barrett’s 2017 confirmation hearings to the Seventh Circuit Court of Appeals. She suggested, in an oft-quoted sound bite, that Barrett’s Catholic faith was “of concern.”

“Why is it that so many of us on this side have this very uncomfortable feeling that dogma and law are two different things, and I think whatever a religion is, it has its own dogma. The law is totally different. And I think in your case, professor, when you read your speeches, the conclusion one draws is that the dogma lives loudly within you,” Feinstein said. “And that’s of concern.”