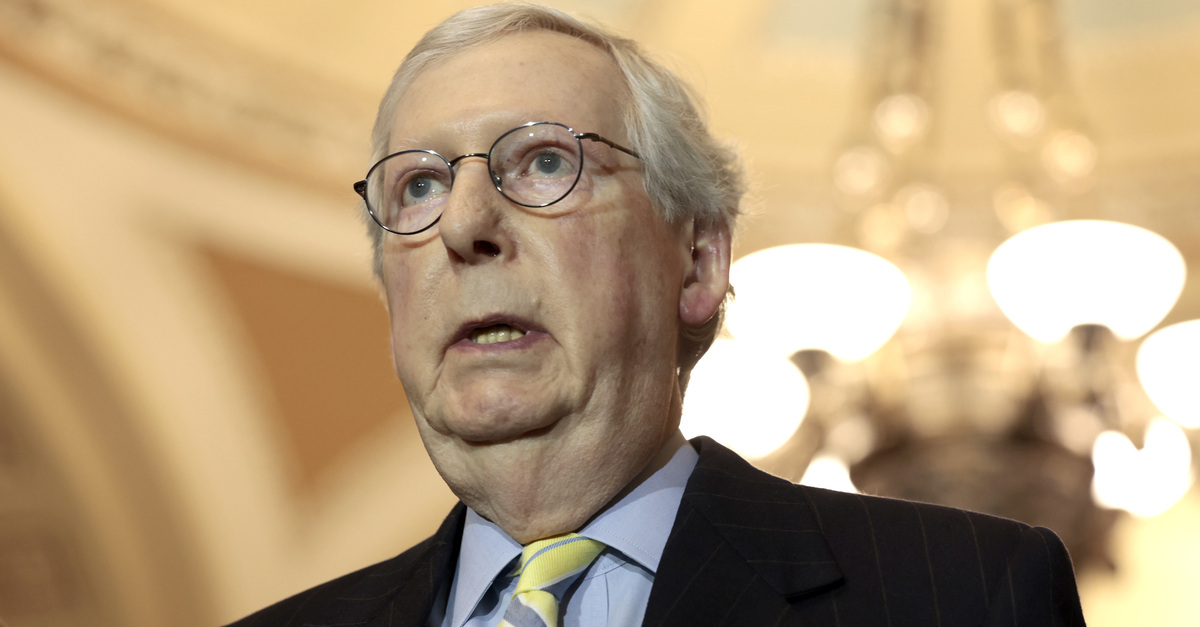 Senate Minority Leader Mitch McConnell (R-Ky.) on Tuesday called for a criminal investigation into the rare, but not unheard of, leak of a draft Supreme Court opinion late Monday evening. That opinion, authored by Justice Samuel Alito, would overturn Roe v. Wade and other precedent that prohibits U.S. states from banning abortion.

“This lawless action should be investigated and punished as fully as possible,” the Kentucky leader of the GOP Senate caucus said. “The Chief Justice must get to the bottom of it and the Department of Justice must pursue criminal charges if applicable.”

Chief Justice John Roberts verified the authenticity of the leaked document, which was obtained and first published by Politico, in a statement released by the nation’s high court late Tuesday morning.

The furious statement from the court’s formal leader, as well as its institutional and self-styled defender, calls the leak a “betrayal of the confidences” of the court–and promises that the draft’s release will not impact the “work” of the court “in any way.”

“I have directed the Marshal of the Court to launch an investigation into the source of the leak,” Roberts’ statement says–stopping short of an outright federal criminal referral.

The Marshal of the Court is a security detail that answers directly to the court and is not a part of the executive branch.

“Sources tell me he is likely to order a full investigation, potentially involving the FBI, into how it happened and who leaked it,” Crawford reported.

Regardless of the nature of the ensuing investigation, legal experts are skeptical that criminal liability exists here (see more on the subject from Mediaite).

“Thanks to Roberts, the Supreme Court has no code of ethics — which is the place you would normally put a ban on misusing nonpublic information,” former White House ethics counsel Walter Shaub commented before asking: “[W]hat crime would FBI even investigate?”

South Texas College of Law Professor Josh Blackman suggested one small, but possible, way to view the leak as a crime.

“There could be a theft of government property if someone literally stole a document off a clerk’s desk,” he told Law&Crime.

As previously reported, the document obtained by news media appears to be a photocopy of Alito’s draft opinion due to a few tell-tale indicia such as the PDF being unsearchable and a slight tilt.

Of course, if a Supreme Court clerk photocopied a document already in their possession and released it, the statute concerning theft of government property would not be applicable in this case.

“The only criminal provision I can imagine might apply is 18 U.S.C 641,” national security attorney Bradley P. Moss told Law&Crime in an email–referring to a statute concerned with public money, reports and records.

The text of that statute reads, in relevant part:

Whoever embezzles, steals, purloins, or knowingly converts to his use or the use of another, or without authority, sells, conveys or disposes of any record, voucher, money, or thing of value of the United States or of any department or agency thereof, or any property made or being made under contract for the United States or any department or agency thereof; or

Whoever receives, conceals, or retains the same with intent to convert it to his use or gain, knowing it to have been embezzled, stolen, purloined or converted [shall be punished in accordance with the statute]

The statute is concerned with the “face, par, or market value, or cost price, either wholesale or retail,” value of whatever is determined to have been stolen. Penalties for stealing something worth $1,000 or less are punishable by a fine or up to one year behind bars. If the “value” of the stolen item exceeds that amount, however, a person convicted under the statute could face 10 years in prison.

“Even if that could apply as a technical matter, I remain skeptical DOJ would actually rely upon it here absent additional information, such as exchanges of money,” Moss explained.