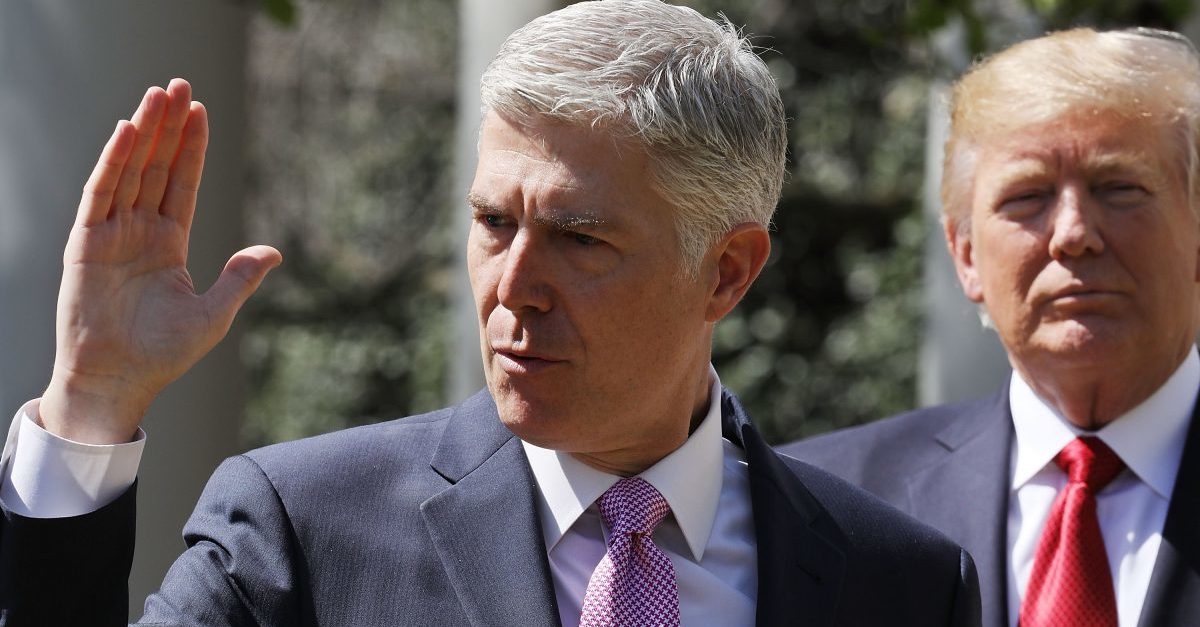 Supreme Court Justice Neil Gorsuch’s dissent Monday in a landmark abortion case was less about abortion than one might initially imagine. It was really about how judges do their jobs.

“In truth, Roe v. Wade (1973) isn’t even at issue here,” he wrote. “The real question we face concerns our willingness to follow the traditional constraints of the judicial process when a case touching on abortion enters the courtroom.”

In other words, stronger constraints by judges would have allowed the Louisiana law to stand. The law required abortion providers to hold hospital admitting privileges.

Gorsuch’s argument is a familiar one. Basically, it is that the court is, in his view, substituting its own views for that of the legislature, and that the court should not be functioning as such. He also accused the court of disregarding its own procedures and of failing to pound out a workable rule for courts to follow. In essence, that means issues like this will roll inevitably uphill to the Supreme Court time and time again.

“Today, however, the plurality declares that the law before us holds no benefits for the public and bears too many social costs,” Gorsuch said.  “All while sharing virtually nothing about the facts that leg the legislature to conclude otherwise.”

“The law might as well have fallen from the sky,” Gorsuch said.

The underlying issue was a Louisiana law, Act 620, which required “abortion providers to hold admitting privileges at a hospital within 30 miles of the clinic where they perform abortions,” was at issue. The plurality of justices (Breyer, Ginsburg, Sotomayor, and Kagan, with Roberts concurring with the judgment) ruled ultimately that the admitting requirement should fall.

Gorsuch then engaged in a lengthy recitation of all the reasons Louisiana passed the law. He said similar laws are in place for “relatively low-risk procedures like colonoscopies, Lasik eye surgeries, and steroid injections at ambulatory surgical centers.” He said “extensive hearings” had been held; experts said admission requirements would result in “safer abortion treatment.” Louisiana abortion clinics also did not undertake the same “rigorous credentialing processes” that hospitals require, he said; they have also “failed to perform background checks.” Some clinics have even “hired physicians whose specialties were unrelated to abortion—including a radiologist and an ophthalmologist.” One abortion provider lost “admitting privileges following a patient’s death.” Abortion providers also racked up “safety and ethical violations” which “included failing to use sterile equipment,” “failing to monitor patients’ vital signs,” and “neglecting to obtain informed consent.”

The descriptions went downhill from there.

“One clinic used single-use hoses and tubes on multiple patients, and the solution needed to sterilize instruments was changed so infrequently that it often had pieces of tissue floating in it,” Gorsuch wrote. “One woman testified that, while she was hemorrhaging, her abortion provider told her, ‘You’re on your own. Get out.’ Eventually, the woman went to a hospital where an emergency room physician removed fetal body parts that the abortion provider had left in her body.”

Other such examples followed.

“After overlooking so many facts and the deference owed to the legislative process,” Gorsuch wrote, “today’s decision misapplies many of the rules that normally constrain the judicial process.”  Among them, he opined were standing (who can sue; in this case, it was the abortion providers, not those seeking abortions, who sued) and facial challenges (attacking a law on its face is “deliberately difficult,” here, the plurality allowed it).

“Rather than follow these rules, today’s decision proceeds to accept one speculative proposition after another to arrive at what can only be called a worst case scenario,” he said.

Then Gorsuch accused abortion doctors of being too lazy to take easy steps to comply with the law. One doctor didn’t obtain admitting privileges because he didn’t take the “sole remaining step” of finding another “doctor willing to cover for him.” Another doctor only asked one other doctor. Another stopped the application process when a hospital asked him or her for more information.

“Maybe these physicians didn’t feel it was worth putting in much effort,” Gorsuch concluded, “given their chances of prevailing in this lawsuit.” Gorsuch thus assumed that Supreme Court litigation was somehow easier than the steps he said were necessary for the doctors to comply with the law.

(Breyer, writing for the plurality, said Gorsuch was making “not a legal argument at all,” but instead was finding “simply another way of saying that the doctors acted in bad faith.” Breyer said the district court “monitor[ed] the doctors’ efforts for a year and a half” and “found otherwise.”)

Gorsuch said that the only “silver lining” in the plurality opinion was that hospitals could amend their admitting privileges rules to allow abortion providers better access — thus rendering the legal ruling issue subject to change.

Gorsuch further articulated a fear that the legal standard adopted by the high court’s plurality would be hard for lower courts to predictably apply. This fear, he said, was rooted in a supposition that lower court judges would apply the law by “straying into the political fray” rather than by applying a neutral test (such as that employed in First Amendment analyses).

The plurality’s ruling, he said, encouraged a what he referred to as “a hunter’s stew: [t]hrow in anything that looks interesting, stir, and season to taste.” Courts cannot merely balance benefits and burdens, he said, and that’s what he fears happening in future abortions rulings: a rush back to the Supreme Court every time the issue of abortion enters the courtroom, because then, only the Supreme Court’s “balance” will matter in the end.

“Missing here is exactly what judges usually depend on when asked to make tough calls: an administrable legal rule to follow, a neutral principle, something outside themselves to guide their decision,” he said.

Read the Gorsuch dissent below: