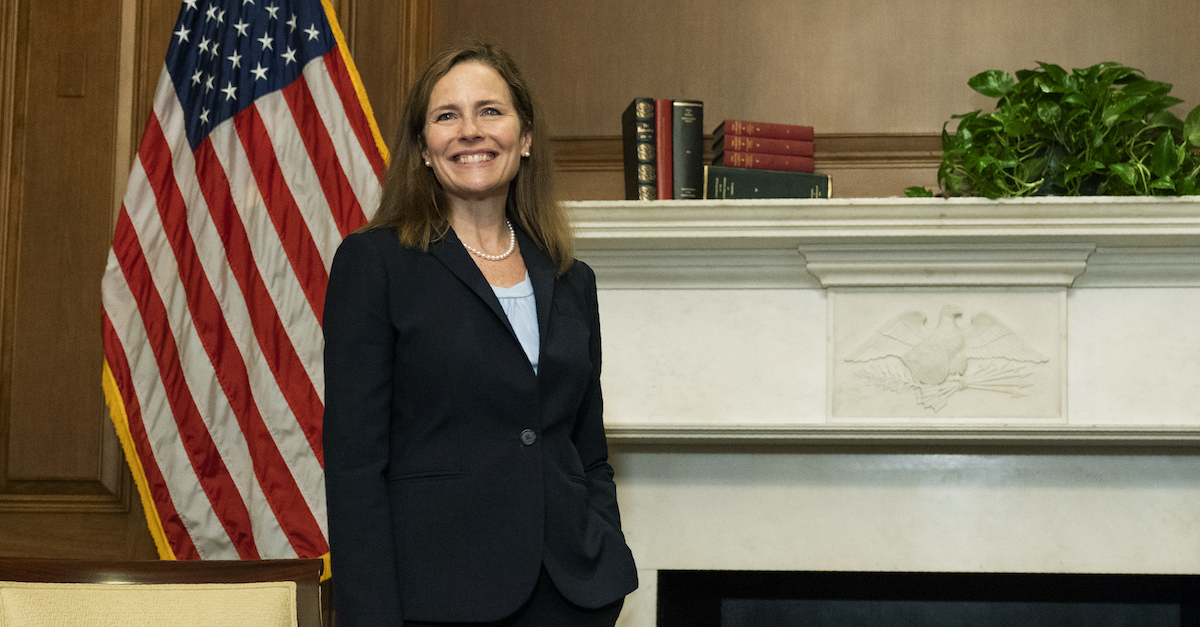 Senate Democrats may have an additional source of rhetorical ammunition against controversial Supreme Court nominee Amy Coney Barrett when her confirmation hearings begin later this month: prior GOP precedent on dealing with nominees who failed to disclose information in their questionnaires.

The hearings are already sure to prove contentious as President Donald Trump and Senate Majority Leader Mitch McConnell (R-Ky.) forge ahead with an expedited timeline to confirm the high court’s replacement for late justice Ruth Bader Ginsburg.

Democrats have groused about the timing of the nomination battle–complaining that a likely-outgoing president, in Trump, should be barred from appointing a lifetime member of the Supreme Court per McConnell’s own prior precedent over the Merrick Garland affair during the final two years of Barack Obama‘s presidency.

McConnell, for his part, easily discarded the so-called “McConnell Rule” and has promised he would rush to confirm the Seventh Circuit Court of Appeals judge sometime before the November election.

And while repeatedly pointing out hypocrisy on the GOP’s part is unlikely to move many votes into the Democrats’ corner on the sure-to-be bruising battle–and all-but assuredly eventual defeat–the Republican Party’s own prior efforts at judicial nomination hardball offer Barrett’s opponents a specific line of attack to use against the former Federalist Society member.

Recall: Barrett came under fire recently when it was reported that she omitted her direct participation in anti-abortion politics from a lengthy Senate Judiciary Committee questionnaire.

In 2006, Barrett signed a newspaper ad sponsored by an anti-abortion group which expressed adamant opposition to “abortion on demand.” At the time, Barrett was a law professor at Notre Dame.

“We, the following citizens of Michiana, oppose abortion on demand and defend the right to life from fertilization to the end of natural life,” the ad in the South Bend Tribune sponsored by Right to Life of St. Joseph County, Indiana read. “Please continue to pray to end abortion.”

More fuel was added to that Friday when it was reported that the nominee failed to disclose speeches she gave to “anti-abortion student groups” on Roe v. Wade.

Democrats, in turn, have demanded to know what else Barrett may be hiding from them–but the putative opposition party has at least one other avenue to pursue Barrett’s alleged omissions on her views regarding the landmark Roe v. Wade decision that decriminalized abortion.

In 2010, Obama nominated Berkeley School of Law Dean and Professor Goodwin H. Liu to fill a vacancy on the U.S. Court of Appeals for the Ninth Circuit. The nomination languished in the GOP-controlled Senate and the nominee was himself attacked before a cloture vote failed–he subsequently dropped out of contention and was later appointed Associate Justice of the California Supreme Court by the Golden State’s once-and-then-governor Jerry Brown.

One of the GOP’s lines of attack against Liu? He omitted speeches from his Senate Judiciary Committee questionnaire.

When Goodwin Liu’s omitted speeches on his 2010 Senate Judiciary questionnaire were discovered, Ranking Member Jeff Sessions and every GOP committee member signed a letter calling him incompetent and demanding hearings be delayed: pic.twitter.com/Lh6IKK5zlv

In an archived version of one such attack from then-senator and future-fired-Attorney-General Jeff Sessions, the GOP leader savaged Liu for omitting records that “include material that shed greater light on Liu’s controversial positions,” a phrase likely to sound familiar to Senate Democrats viz. Barrett now.

“At best, this nominee’s extraordinary disregard for the Committee’s constitutional role demonstrates incompetence; at worst, it creates the impression that he knowingly attempted to hide his most controversial work from the Committee,” Sessions said at the time. “Professor Liu’s unwillingness to take seriously his obligation to complete these basic forms is potentially disqualifying and has placed his nomination in jeopardy.”

The committee being aghast at Liu’s omissions also had a real-world impact on his eventually-failed nomination.

“The senators pointed out that not only do the enormous volume of newly discovered materials require extensive review, but a further investigation must be conducted to ensure that nothing else is missing,” the GOP press release said–directly evoking the stance that Democrats have taken with regard to Barrett now.

Despite the nearly 100-percent grade Democrats face in their steep and uphill climb against confirming Barrett, it’s certainly not beyond the realm of possibility that at least one member of their caucus can recite and wield judicial nomination history from the past decade.