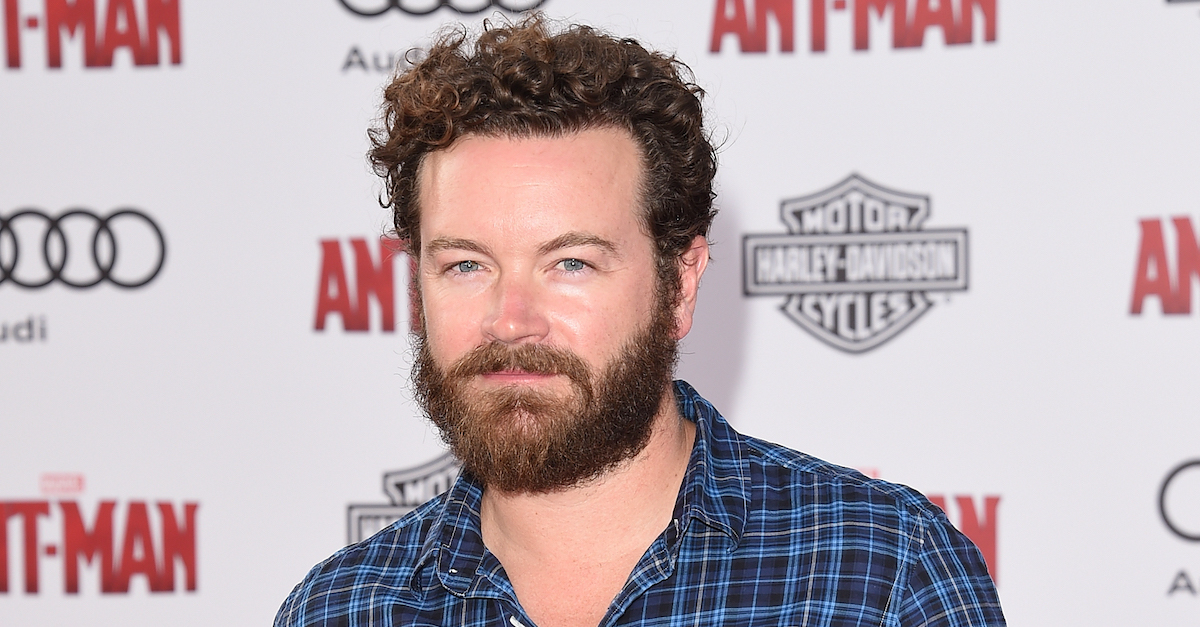 Danny Masterson was photographed at a Hollywood premiere on June 29, 2015. (Photo by Jason Merritt/Getty Images.)

The Church of Scientology is asking the U.S. Supreme Court to hear a case that questions whether religious groups can force their followers — and even their ex-followers — to submit to internal arbitration proceedings to settle disputes.

The case is connected to and indeed names Daniel Masterson, the “That 70s Show” actor who faces an upcoming rape trial in the California state court system.  The respondents in the case allege that Masterson, who is described in Church legal filings as “another Church parishioner,” sexually assaulted them between 2000 and 2003.  The instant case involves not the instances of alleged assault but rather whether church officials “improperly handled Respondents’ reporting of the alleged assaults.”

An intermediate California appellate court ruled on Jan. 19, 2022 that the respondents enjoyed a First Amendment right to leave the Church of Scientology and that their mandatory arbitration agreement with the church was terminated along with the respondents’ departure from the faith.  That ruling flatly described the Masterson allegations as “rape”:

Petitioners in this writ proceeding are former members of the Church of Scientology who reported to the police that another Church member had raped them. They allege that, in retaliation for their reports, the Church encouraged its members to engage in a vicious campaign of harassment against them. After petitioners brought suit in superior court against the Church and related entities and persons, some of those defendants moved to compel arbitration, relying on agreements that provided all disputes with the Church would be resolved according to the Church’s own “Ethics, Justice and Binding Religious Arbitration system.” That system was created to decide matters “in accordance with Scientology principles of justice and fairness.”

One key point of the California Court of Appeal ruling was that petitioners’ case involved conduct that allegedly occurred after the petitioners left the church:

Individuals have a First Amendment right to leave a religion. We hold that once petitioners had terminated their affiliation with the Church, they were not bound to its dispute resolution procedures to resolve the claims at issue here, which are based on alleged tortious conduct occurring after their separation from the Church and do not implicate resolution of ecclesiastical issues. We issue a writ directing the trial court to vacate its order compelling arbitration and instead to deny the motion.

The Court of Appeal opinion is officially unpublished and therefore carries little to no weight as precedent under the California Rules of Court (Rule 8.1115, specifically).

The California Supreme Court refused to take the case, so the church appealed to a higher authority.  The church’s U.S. Supreme Court petition asks the nation’s highest court to pluck the matter from the California court system and proffers these two issues as questions presented:

(1)  Where a parishioner freely executes a religious arbitration agreement with her church, does the First Amendment prohibit enforcement of the agreement if the parishioner leaves the faith?

(2)  Does the First Amendment restrict the terms on which a Church may accept members into its faith?

At times co-opting language from the Court of Appeal opinion, the church asserts in its petition to the U.S. Supreme Court that its followers consented to an “irrevocable agreement” to “submit disputes to Scientology arbitration” — which is just “one of the prices of joining [the Scientology] religion.”

The church’s practice of resolving disputes with members is described in the petition as “religious arbitration.”  The petition chides California’s court system for — in Scientology’s view — forcing it to change the way it admits and deals with its own congregants.  The church argues that the First Amendment bans the state and its courts from governing church dispute resolution procedures.

“[R]eligious arbitration is a long-recognized institution that is increasing in use throughout the United States and across religions,” the church wrote.  “Review by this Court is necessary to settle the confusion created by the California Court of Appeal. Religious organizations need this Court to remove any doubt that their contracts – including their agreements to arbitrate disputes before a religious forum – cannot be voided by a party’s professed change of mind. Churches have the right to know that their contracts are equal under law and not subject to ad hoc and unprecedented application of a state action theory by judicial officers.”

The church elsewhere described the dispute for the Court in these terms:

Contracts are contracts, even when a church is a party. It should go without saying that contracts with churches are entitled to the same protection under the law as contracts with secular entities. The California Court of Appeal disagrees. It held that a voluntary party to an otherwise enforceable contract with a church may annul that contract by asserting a First Amendment right to “leave the faith” and “extricate” themselves from the church. While secular entities can enforce contracts over the objections of a party that no longer wishes to be bound, churches now cannot, as long as a party asserts a change of faith. The Court of Appeal deprived churches of the contractual right that really matters – the right to enforce. And it did so expressly because churches are religious.

The statement of the case continues:

At some point, Respondents changed their minds, and their faith. They argued that their change of faith should free them from their contractual obligations to submit their disputes with Petitioners to the chosen religious forum. The California Court of Appeal agreed. It became the first court in the nation to overturn a freely executed religious arbitration agreement based on the objection by a party that the selected forum was exactly what the party agreed to – religious. The Court of Appeal arrived at this result by finding state action in the judicial enforcement of religious arbitration agreements, while acknowledging that the enforcement of secular arbitration agreements does not amount to state action.

A response to the church’s petition is due Aug. 22, according to the Supreme Court’s docket for the case.

Masterson is scheduled to face a separate criminal trial in California this October.  Masterson has denied the allegations against him, Law&Crime has previously reported.

Read the church’s 144-page petition (and its concomitant attachments) below: