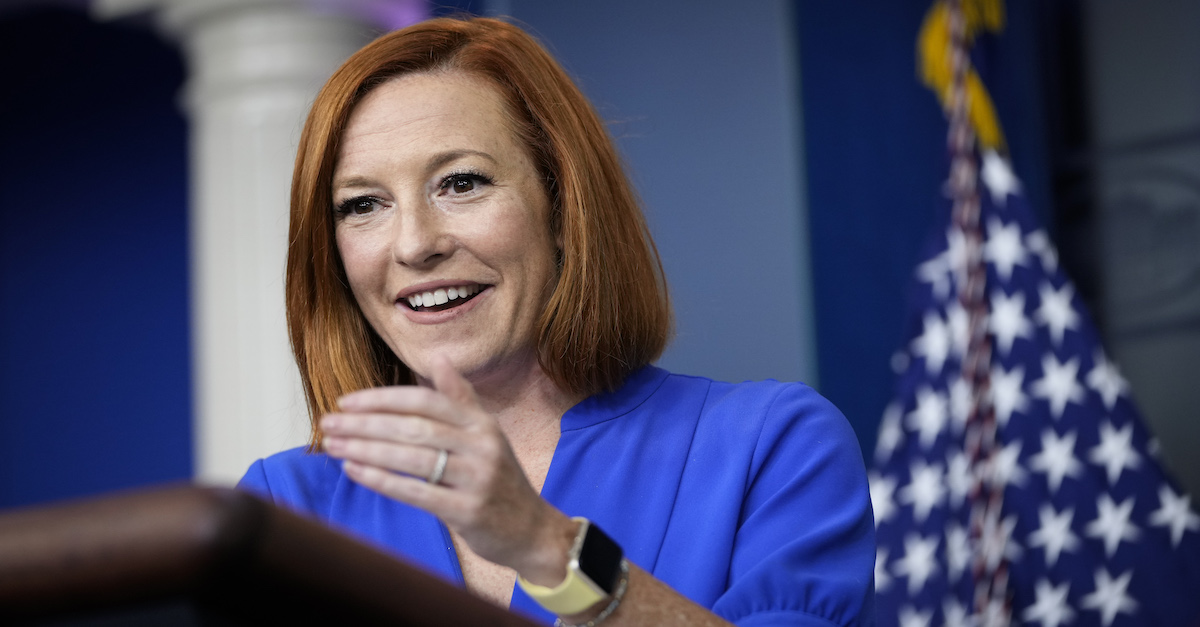 White House Press Secretary Jen Psaki has pledged to “be more careful” after being accused of violating the Hatch Act by a government watchdog organization.

Citizens for Responsibility and Ethics in Washington (CREW) sent a letter to the U.S. Special Counsel’s office Friday alleging that Psaki “violated the Hatch Act by advocating for the election of Terry McAuliffe to be governor of Virginia during an official White House press briefing.”

Specifically, CREW pointed to this exchange during Thursday’s press briefing:

Q: I’m curious if the White House sees the Virginia governor’s race as a bellwether — we talked about it a lot in here — and if the outcome is basically a (inaudible) support of the President’s agenda since McAuliffe is running on it quite a bit.

MS. PSAKI: Well, I have to be a little careful about how much political analysis I do from here and not (inaudible) into that too much.

Look, I think the President, of course, wants former Governor McAuliffe to be the future governor of Virginia. There is alignment on a lot of their agenda, whether it is the need to invest in rebuilding our roads, rails, and bridges, or making it easier for women to rejoin the workforce.

I will say as — I will leave it to other outside analysis to convey that off-year elections are often — are often not a bellwether, but — and there’s a lot of history here in Virginia. But, again, we’re going to do everything we can to help former Governor McAuliffe, and we believe in the agenda he’s representing.

McAuliffe, a Democrat who served as Virginia’s governor from 2014 to 2018, is seeking to reclaim his old job. He’s currently locked in a close race against Republican businessman Glenn Youngkin.

Psaki responded to CREW’s complaint on Friday, telling CNN’s Jake Tapper that she would be “more careful” going forward.

“I take ethics seriously,” Psaki said. “So do this president, of course. As I understand, if I had said ‘he’ instead of ‘we,’ that would not have been an issue at all, and I’ll be more careful with my words next time. Words certainly matter.”

CREW, for its part, seemed pleased with Psaki’s response.

“We appreciate Jen Psaki and the Biden administration reaffirming their commitment to ethics and to the law, something all too rare in recent years,” CREW tweeted. “We look forward to a renewed commitment to compliance with the Hatch Act from the administration.”

We appreciate Jen Psaki and the Biden administration reaffirming their commitment to ethics and to the law, something all too rare in recent years. We look forward to a renewed commitment to compliance with the Hatch Act from the administration. https://t.co/QJ2as5HD7E

The Hatch Act prohibits any executive branch employee from “us[ing] his official authority or influence for the purpose of interfering with or affecting the result of an election.”

In Friday’s announcement, CREW acknowledged its history of going after the Trump administration, whose members faced multiple accusations of Hatch Act violations.

“Trump press officials showed a disdain for the Hatch Act, making a mockery of it while they were in office,” Bookbinder said, later adding that “Psaki’s apparent violation is nowhere near as extreme as those of her predecessors.”

As Law&Crime has reported, many Trump administration aides and officials—and even Donald Trump himself—were accused of Hatch Act violations. Some, apparently, even bragged about it.

You can read CREW’s complaint below.