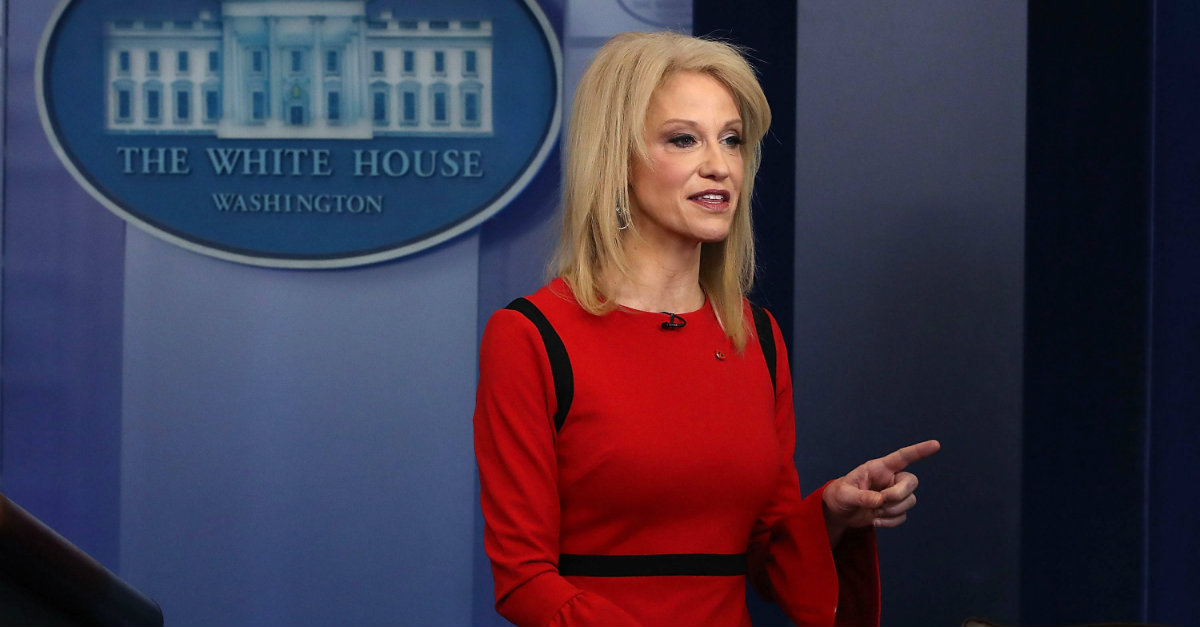 The Office of Special Counsel (OSC)–not to be confused with the Special Counsel’s Office (SCO)– has recommended White House counselor Kellyanne Conway‘s removal from her post, due to repeated violations of the Hatch Act.

The Thursday press release from OSC said that President Donald Trump has been sent a report saying that Conway “violated the Hatch Act on numerous occasions by disparaging Democratic presidential candidates while speaking in her official capacity during television interviews and on social media.”

Conway was dubbed a “repeat offender” who has “shown disregard for the law.” OSC recommended her removal.

“Ms. Conways violations, if left unpunished, would send a message to all federal employees that they need not abide by Hatch Act’s restrictions,” OSC said. “Her actions thus erode the foundation of our democratic system — the rule of law.”

The White House has already responded with a “wrong” statement.

This statement is just wrong.

2) No one has deprived @KellyannePolls of anything; this is a recommendation to terminate her (wholly discretionary) gov't employment. https://t.co/f59m2nCBB3

It claims that Conway’s First Amendment rights have been violated; the Hatch Act, by definition, restricts speech of covered executive branch employees when they speak in their official capacities.

Conway, for instance, made an appearance on CNN back on April 27, 2019. CNN Host Michael Smerconish would later say on his SiriusXM radio program that he was thinking the whole time during the interview that Conway’s comments about Joe Biden could be a “Hatch Act issue.”

“I found this really interesting. Now she pivots to Vice President Biden. I had been told that you really can’t address particular Democratic candidates with Kellyanne Conway because there will be a Hatch Act issue. She’s on the payroll of the White House; she can’t be partisan in her comments,” he said. “I understand that. I remember it from my days of serving in the Bush, meaning 41, administration. While I held a federal job, I couldn’t be involved in partisan politics. So I was a little taken aback when now she pivots and wants to talk about Biden and talk about how gloomy and creepy and dark she found his message to be.”

You want to revisit this the way Joe Biden wants to revisit [this], respectfully, because he doesn’t want to be held to account for his record or lack thereof. And I found his announcement video to be unfortunate—certainly a missed opportunity, but also just very dark and spooky in that it’s taking us—he doesn’t have a vision for the future. He doesn’t mention President Obama, the popular president he served for eight years in his video who has refused to endorse him. He doesn’t lay out a vision for the future.

CREW went on to accuse Conway of violating the Hatch Act in three other TV interviews. They pointed to 5 U.S.C. §§ 7321-26, which states that executive branch employees are prohibited from “us[ing] his official authority or influence for the purpose of interfering with or affecting the result of an election. Using official authority means “[u]sing his or her official title while participating in political activity.”