AGs of 2 States That Backed Trump in 2016 Are Looking Into Legal Action Amid USPS Controversy: Report 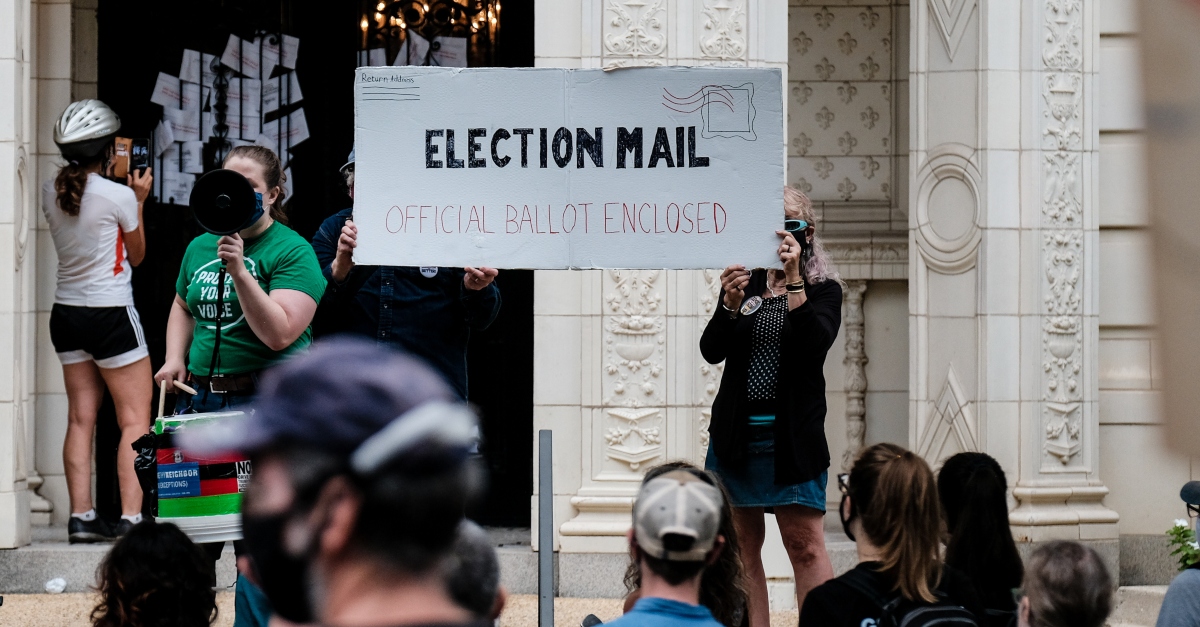 From Getty images: “Demonstrators gather outside of the condo of President Donald Trump donor and current U.S. Postmaster General Louis Dejoy on August 15, 2020 in Washington, DC. The protests are in response to a recent statement by President Trump to withhold USPS funding that would ensure that the post office would be unable handle mail-in voting ballots for the upcoming 2020 Election.”

Attorney generals of six states are looking into possibly suing the Trump administration to stop any changes or funding problems that might affect the upcoming 2020 presidential election, according to The Washington Post. Two of those states–North Carolina, and Pennsylvania–backed then-candidate Donald Trump in the 2016 presidential election. The other four–Massachusetts, Minnesota, Virginia, and Washington state–sided with Democratic nominee Hillary Clinton. The AGs of all six states are Democrats. They plan on announcing legal action early this week, according to sources cited by the Post.

Critics point out that the Trump administration is undermining the performance of the U.S. Postal Service on purpose in order to hurt mail-in voting counts in the upcoming 2020 presidential election. The actions included removing a number of mailboxes and sorting machines nationwide.

“This reeks of mail and election fraud–the scheme to defraud using the removal of mail sorting machines without reason as a means to inhibit mail in voting,” federal criminal defense attorney Tor Ekeland said in an email to Law&Crime on Friday. “These are felonies and should be investigated and prosecuted appropriately.”

Mail-in votes are an even bigger deal amid the COVID-19 and social distancing measures.

The president has said he is absolutely trying to undermine mail-in voting! He has made completely unsubstantiated claims that mail-in votes are tainted with widespread fraud.

The legal action from the six AGs would hardly be the first sign of official scrutiny amid the U.S. Postal Service debacle. Rep. Bill Pascrell, Jr. (D-NJ) called the Trump administrations actions an “arson.” he asked his state attorney general to empanel a grand jury to investigate Trump and some top executives at the USPS.

The Office of the Inspector General is reportedly launching an investigation after Sen. Elizabeth Warren (D-Massachusetts) pointed out Postmaster General Louis DeJoy beings a Trump mega donor who invested in USPS contractors and competitors.

“Over the past several weeks, there have been startling new revelations about the scope and gravity of operational changes you are implementing at hundreds of postal facilities without consulting adequately with Congress, the Postal Regulatory Commission, or the Board of Governors,” Maloney wrote. “Your testimony is particularly urgent given the troubling influx of reports of widespread delays at postal facilities across the country—as well as President Trump’s explicit admission last week that he has been blocking critical coronavirus funding for the Postal Service in order to impair mail-in voting efforts for the upcoming elections in November.”

[Image via Michael A. McCoy/Getty Images]