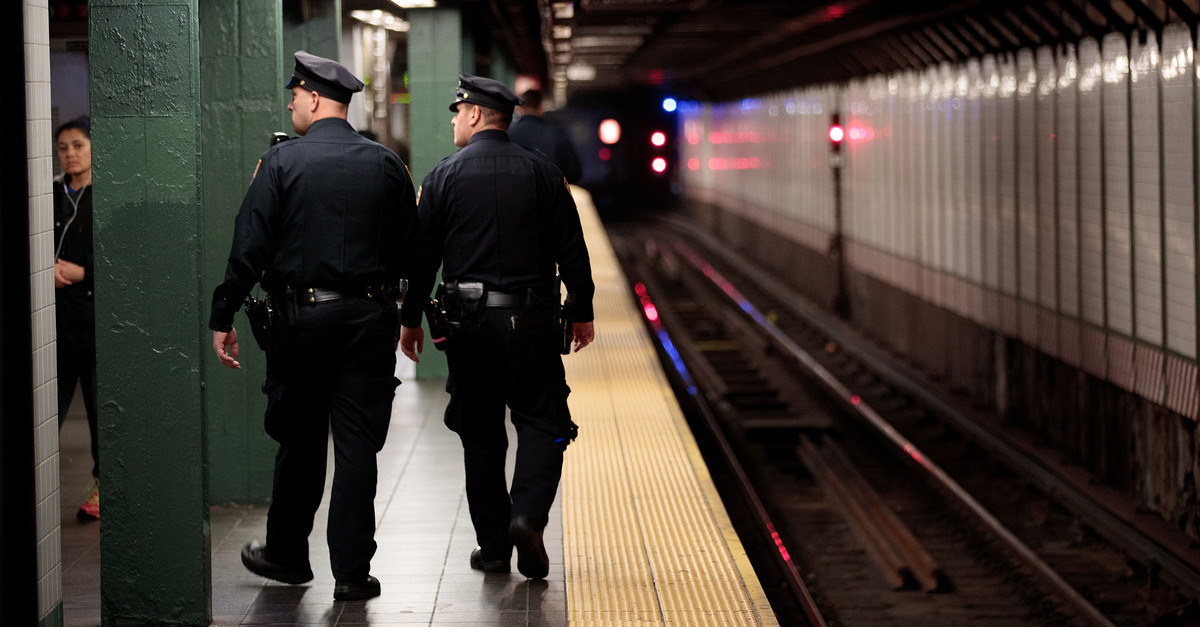 The New York City Police Department (NYPD) and New York City legal officials are facing a massive scandal alleging a conspiracy of silence and racism over the department’s use of so-called “collar quotas” against Black and Hispanic New Yorkers.

According to the New York Daily News, a lawsuit names Assistant Chief Christopher McCormack and Deputy Inspector Constantin Tsachas as officials who enforced racially-based discipline on minority officers who did not meet the expected arrest numbers–doubling the alleged racism doled out by the NYPD by targeting both minority commuters and minority police officers alike. The City of New York is alleged to have withheld this information from the public.

The discrimination lawsuit was brought by now-retired NYPD Sgt. Edwin Raymond and three other former officers in the Southern District of New York (SDNY). Several additional ex-cops recounted what they described as officially-sanctioned racism at the root of Subway fare enforcement in affidavits filed with the court.

“I got tired of hunting Black and Hispanic people because of arrest quotas,” explained former officer Christopher LaForce in an affidavit describing the motivation behind his decision to leave the NYPD. “Tsachas would get angry if you tried to patrol subway stations in predominately white or Asian neighborhoods” LaForce added.

Former officer Pierre Maximilien described the system as “collars for dollars” in a bombshell deposition filed earlier this week:

We were taught by Tsachas’ closest lieutenants that we could not give summons to what they called … “soft targets,” Instead, it was emphasized that we needed to stop male blacks. Those were the ones Tsachas wanted to go to jail.

“The utter disregard for civilians of color and their ability to treat them like animals made me second guess who I was actually serving in the NYPD,” Maximilien’s affidavit continues. “Tsachas created this racial divide within the department. He rewarded the white officers and punished the minority officers.”

The NYPD’s alleged “soft targets” included white and Asian New Yorkers–only African Americans and Hispanics were supposed to be handcuffed for Subway fare violations, Maximilien claims. The ex-cop also said that white officers who bucked their supervisors’ race-based demands would “get a pass from command” while punishment was meted out severely to officers of color for not following the same orders. “They would write it off as a bad month and place them in areas with partners who were extremely aggressive so they could make the arrest quota.”

“The supervisors would place the minority officers in punishment posts by ourselves, deny vacation or leave, deny us overtime, change our shifts, give us bogus command disciplines, yell at us in roll call, and give us poor evaluations,” the since-retired officer said.

Other sworn statements were filed with the SDNY which appeared to support Maximilien and LaForce’s allegations.

“You are stopping too many Russian and Chinese,”officer Daniel Perez averred–recalling years-old advice from Tsachas.

Officer Aaron Diaz said that in 2012, Tsachas criticized his Subway fare enforcement as well, allegedly telling him: “You should write more black and Hispanic people.”

Tsachas is now the second-highest ranking transit cop in Brooklyn–and his alleged theory of policing may be holding sway over New York’s largest borough as the police ramp up fare enforcement in an economically costly effort to stop fare evasion. New York Governor Andrew Cuomo‘s highly-criticized decision to swamp the Subways with police officers has a price tag of $249 million dollars; the effort is aimed to recoup a potential $200 million in fares from indigent riders.

Additional allegations against McCormack are detailed in a memorandum recently filed by the officers’ attorney John Scola.

“[N-word] you are lucky that I didn’t Sean Bell you,” McCormack allegedly told a citizen. Sean Bell was killed after four uniformed and plainclothes officers unleashed a barrage of gunfire inside a Queens strip club at his own bachelor party in 2006. Two other men suffered multiple gunshot wounds but survived the onslaught.

“McCormack then proceeded to stick his finger in the rectum of the complainant and threatened to hurt his disabled pregnant wife,” Scola wrote.

The NYPD’s legal department has rejected the claims in the lawsuit–citing the results of an earlier internal investigation.

‘These claims of discrimination have not been substantiated,” the NYPD’s attorneys said in a statement released to the press. “The NYPD investigated the allegations in Officer Maximilien’s declaration and found them to be meritless. We’ll continue to defend against these baseless accusations.”