Using Trump’s Golf Course for G7 Summit Is a Clear Emoluments Violation, But What Can Be Done About It? 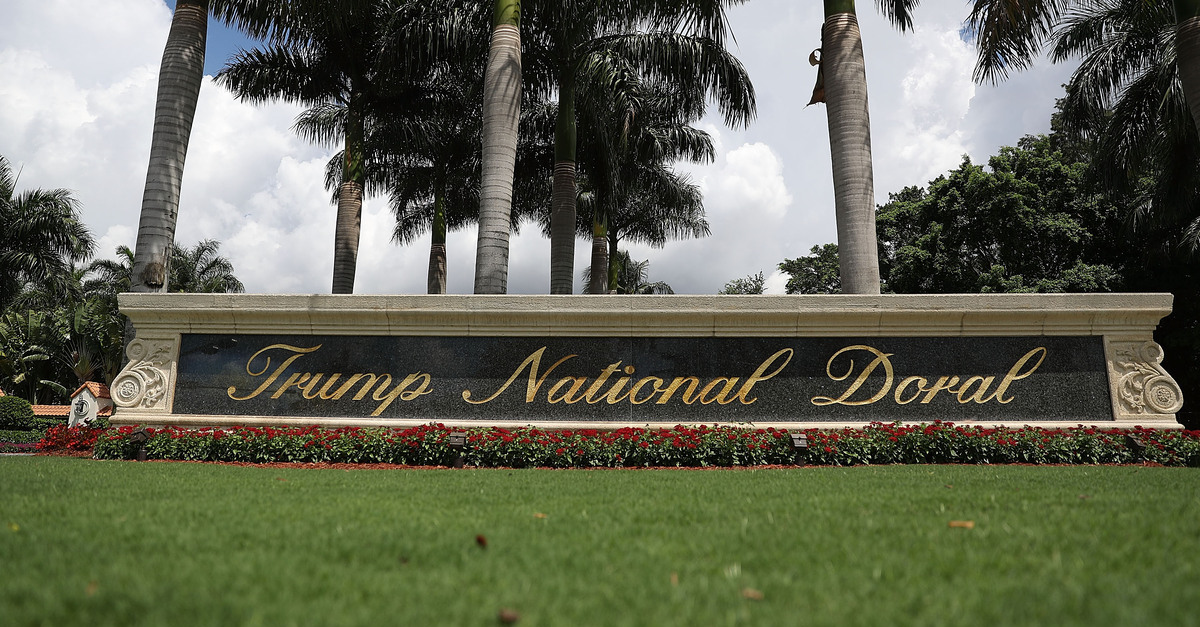 The ever-turning wheel of Donald Trump‘s malfeasance shifted from “racism” to “emoluments” this week when the administration named Trump National Doral, one of the president’s luxury golf resorts, as a potential site for the 2020 G7 economic summit. The 800-acre Miami golf club has long been a prized Trump property, though it’s reportedly been struggling financially in recent years.

Now’s a good time to point out that U.S. presidents aren’t allowed to profit from their terms in office. By “not allowed,” I mean that it’s specifically prohibited by the Constitution. In the context of the golf course, I’m not talking just about the Article I foreign emoluments clause (which specifically mentions “consent of Congress”) – but rather, the Article II domestic one.

The President shall, at stated Times, receive for his Services, a Compensation, which shall neither be increased nor diminished during the Period for which he shall have been elected, and he shall not receive within that Period any other Emolument from the United States, or any of them.

I bring up the two different clauses for the sake of comparison. When a president has received financial gain from foreign dignitaries, Congress can bless the transaction. By contrast, if we’re talking about his profiting domestically, it’s always a “no.” Neither friendly Congress, nor Act of God can cure the conflict. The president gets a salary, and that’s it. End. Of. Story. Using Trump National Doral for the G7 has potential to put both foreign and domestic dollars in the president’s pocket. That’s double-emoluments drama for those keeping score.

Memo to the President: you will be intentionally violating the Constitution by accepting payments & benefits from G7 nations at your private golf club. This textbook example of payoffs is exactly what the Foreign Emoluments Clause sought to prevent.

When it comes to analyzing the legislative intent of clauses within the same document, such conspicuous differences are always relevant. The framers knew there was a risk that some states would try to buy their way into sweetheart deals with the federal government. So they absolutely prohibited the president from accepting anything other than salary; this way, no one ever has to question a president’s motivation for taking some kind of official action that favors one state over the others. I’m sure the framers couldn’t have imagined a reality-television president paying hush-money to porn stars, but they did understand corruption.

There’s one problem though: emoluments clauses are tough to enforce. In fact, the Fourth Circuit just recently dismissed an emoluments case filed by Washington D.C. and the State of Maryland against Donald Trump for profiting off foreign and state government visitors at his Washington hotel.

The dismissal didn’t turn on the issue of whether or not Trump’s behavior violated the Constitution, but rather, whether the plaintiffs had a right to sue in the first place. It was incumbent on the plaintiffs to prove that they had “standing” to bring the lawsuit.

Standing, especially in cases involving the authority of a government official, can be pesky. To have standing to sue, a plaintiff must prove that it has been actually harmed by that person’s wrongdoing. At this point, no court has ruled that any particular plaintiff has the necessary standing to sue Trump for emoluments violations.

Maryland is one of the original ratifiers of the Constitution.
Is federalism a one way street?
Federal law preempts state law but a state can’t sue a president for violating the Constitution? Even when it harms that state’s businesses?
On to SCOTUS.https://t.co/6C4EnjiMuT

That brings us right back to where most of us expected: impeachment. If emoluments violations won’t adequately hold up a private lawsuit, there still must be some way to check them. It stands to reason that a co-equal branch would bear both the authority and responsibility to monitor and enforce constitutional limitations on the presidency, especially for behavior that is so widely condemned.

The potential use of one of the President’s properties for the G7 summit is just the latest example of the extremely problematic, but sadly all too common, pattern of mixing his business with the presidency. https://t.co/TlfCs5pC7s

If accurate, it’s grotesque. Trump is using the presidency to gain financially. A horrible conflict of interest and ethics failure. https://t.co/utLFuU4VlF

Certainly, using the impeachment process to enforce Article II limitations could work. As I’ve written before, there are many experts who believe impeachment can and should function as a kind of congressional employment-review for the president. Although “high crimes and misdemeanors” is often understood as some kind of serious criminal offense, there is some significant historical basis for adjusting that perception to mean simple malfeasance. Furthermore, impeachment is not a criminal process, but rather an inherently political one — which further underscores the applicability of impeachment proceedings to emoluments violations.

However, getting the necessary members of Congress to agree on impeachment, conviction, and removal is no easy task; inspiring them to do it for something like awarding a government contract to Trump’s golf course seems unlikely at best. So, are there other options? Probably.

Congress could legislate, passing specific laws that govern the use of federal funds to patronize businesses owned by a sitting president. Given that every president prior to Trump has divested himself of private business interests before taking office, there has never been any real need for such legislation. Perhaps now is the time, both to solve the Trump problem and to cauterize similar conflicts in the future.

The judiciary might have a role as well. The plaintiffs in the recently-dismissed emoluments suit could appeal their loss up to the U.S. Supreme Court and leave it to the high bench to give the final word on emoluments. Such an appeal, however, would run the risk of being shut down before the merits were even considered, as it was in the Fourth Circuit.

Emoluments violations are currently living in a kind of legal wasteland: everyone seems bothered by them, but no one is actually harmed. Perhaps the most potent weapon against presidential emoluments violations would come down to creative lawyering; if individual states don’t have standing, maybe individual businesses do. Reframing the actions of the Trump administration as direct attacks on Americans or their businesses may be what’s required to get the case properly before a court. Of course, it would be cheaper and easier to just vote him out next November.