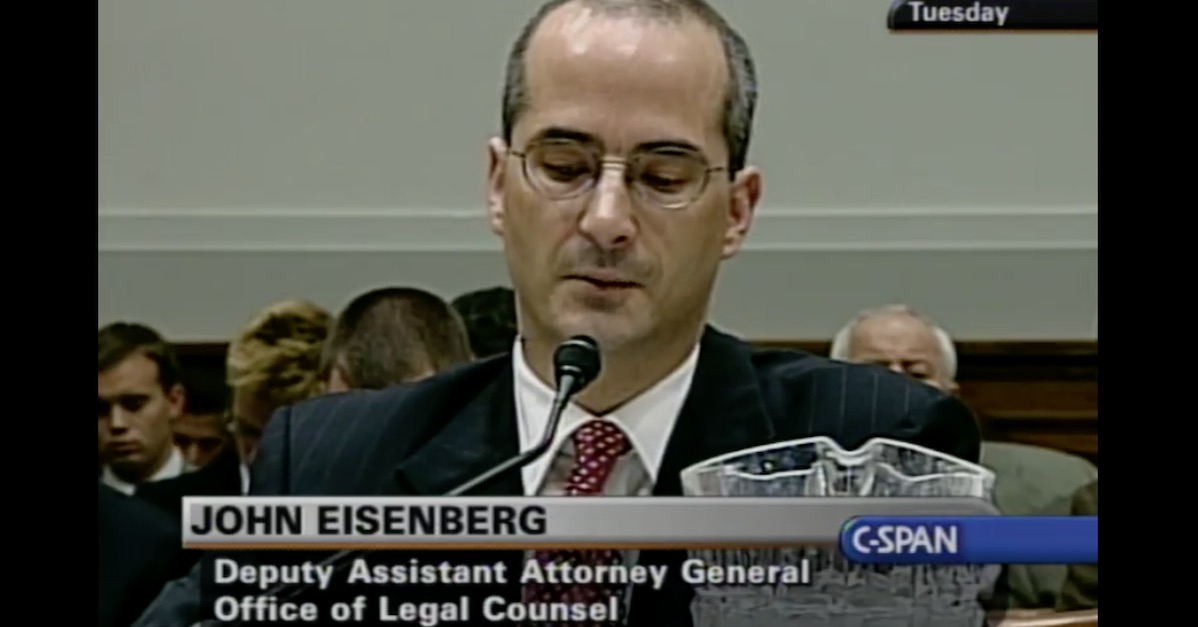 A “person familiar with the thinking” of John Eisenberg, the National Security Council (NSC) lawyer who recommended restricting access to the July 25 Trump-Zelensky call and then refused to testify in the impeachment inquiry, threw White House counsel Pat Cipollone under the bus on Monday.

The Wall Street Journal reported that Eisenberg, the general counsel for the NSC, was the lawyer impeachment inquiry witnesses went to with concerns about President Donald Trump’s July 25 call with Ukraine, and the shadow foreign policy that U.S. Ambassador to the EU Gordon Sondland and Rudy Giuliani were executing.

The contents of the call ended up being stored in a highly restricted codeword-protected server. Eventually, the White House released a memo of the July 25 call. That was after a whistleblower lodged a complaint about the call and after previously withheld congressionally approved military aid to Ukraine was released.

The source familiar with Eisenberg’s thinking claimed that after complaints were received about a July 10 meeting — “during which Mr. Sondland allegedly told visiting Ukrainian officials that a Trump-Zelensky meeting was contingent upon the investigations” — Eisenberg forwarded those concerns to Cipollone:

“Pat told John to raise it with the president, but he did not,” according to this person. “He didn’t think [the July 10 meeting] was important enough given other things that were going on…No one understood why [Mr. Sondland] was involved in Ukraine. Maybe he was blowing smoke and pretending to be more important than he is.

The unnamed source also claimed Eisenberg went to Cipollone when concerns were raised about the July 25 Trump-Volodymyr Zelensky phone call, during which Trump raised the prospect of Ukraine opening investigations into the Bidens:

After discussing the phone call with Col. Vindman, Mr. Eisenberg then shared what he was told with Mr. Cipollone, according to this person. He also spoke about it directly with John Demers, Assistant Attorney General of the National Security Division at the Justice Department, and he sent the rough transcript for review to the head of the department’s criminal division. The Justice Department ultimately decided not to pursue the matter.

This person further disputed that Eisenberg made the decision to bury the call in the aforementioned server, saying that Eisenberg only recommended restricting access to the call and securing it. The Washington Post previously reported that Eisenberg was the first official to propose moving the evidence of the call to the separate server after being told about the content of it. Lt. Col. Alexander Vindman’s testimony was the first eyewitness account tracing the decision to move the transcript directly back to Eisenberg.

“Given that your inquiry lacks any legitimate constitutional foundation, any pretense of fairness, or even the most elementary due process protections, the Executive Branch cannot be expected to participate in it,” Cipollone wrote. “Because participating in this inquiry under the current unconstitutional posture would inflict lasting institutional harm on the Executive Branch and lasting damage to the separation of powers, you have left the President no choice. Consistent with the duties of the President of the United States, and in particular his obligation to preserve the rights of future occupants of his office, President Trump cannot permit his Administration to participate in this partisan inquiry under these circumstances.”

Eisenberg heard that message loud and clear: he went along with the White House directive not to testify. It seems Eisenberg will wait for a judge to order him to testify.