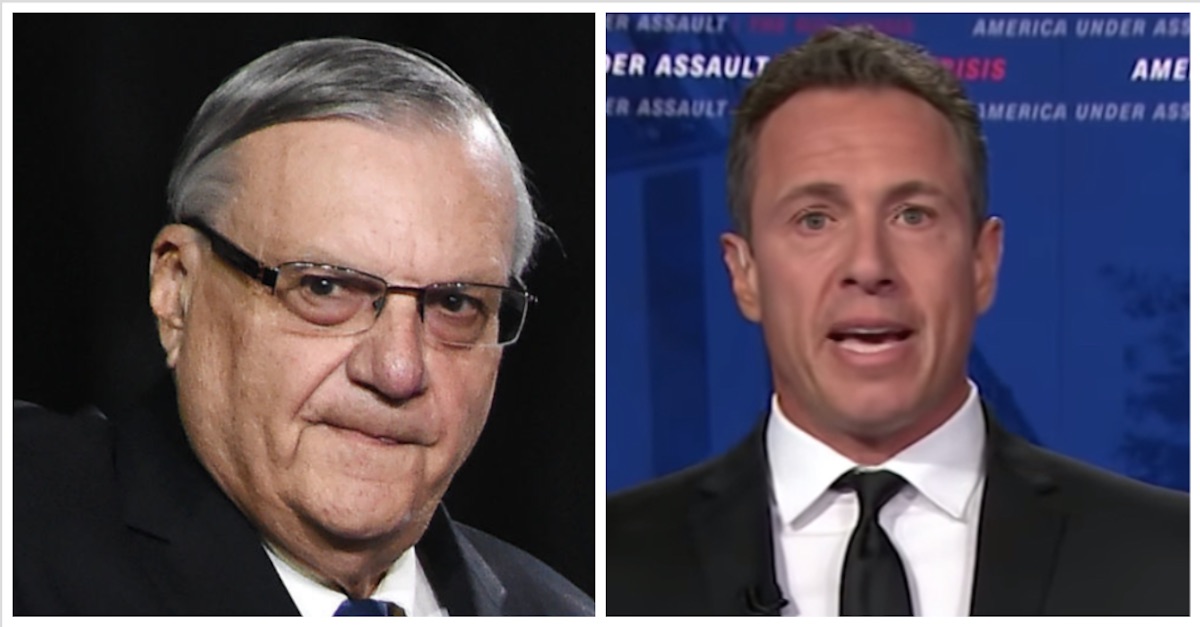 “Sheriff Joe” Arpaio really needs to give it a rest. The man enjoyed decades of unfettered control over Maricopa County during which he trampled on people’s rights, abused those within his jurisdiction, and made a mockery of the very concept of law enforcement. His reign is over, and no one — least of all federal courts — is interested in his whining over how unfair the liberal media is to him.

Arpaio sued Chris Cuomo (as well as CNN, Rolling Stone and HuffPost), arguing that he’d been defamed when the various news outlets called him a felon. U.S. District Judge Royce C. Lamberth granted the defense’s motion to dismiss Thursday, ruling that Arpaio’s attempt at claiming defamation fell woefully short of what’s required. Arpaio’s claim was that in, Jan. 2018, Cuomo introduced a report about him during the “New Day” morning show; Cuomo said Arpaio was a “convicted felon” who was later pardoned by President Donald Trump. Technically, that wasn’t quite true.

I interrupt the Arpaio-as-victim narrative for a moment with a refresher on why he is a dangerous and deceptive scourge on anything he touches. Among Arpaio’s more notable accomplishments were running a prison that was called a “concentration camp” —  due to its extraordinarily high death rates, the ridiculing, demeaning and mistreating of inmates in pervasive and creative ways, and the arresting reporters who covered the stories.

Even now, Arpaio continues to brag about the effectiveness of his “chain gangs.”

While traveling outside of Maricopa County I met a waitress in a restaurant, who served on my one and only Female Chain Gang in the USA. She was very appreciative and said nice words about the chain gang & Tent City Jail for her rehabilitation. pic.twitter.com/vuFb6buLwl

The good sheriff’s office also failed to investigate hundreds of sex abuse cases. Oh, and one time, he staged an assassination attempt against himself to help his poll numbers. Good times.

Immigrants have always been a preferred target of Arpaio’s, and in 2011, the ACLU sued him for illegally harassing undocumented immigrants. During that lawsuit, Judge G. Murray Snow issued an injunction ordering Arpaio to stop his unconstitutional practice of running warrantless police sweeps to round up undocumented immigrants. Arpaio flatly ignored the order and unapologetically kept doing his thing.

Because Arpaio’s blatant flouting of Judge Snow’s order was a bit much to take, he was then was prosecuted for criminal contempt. That prosecution proceeded before Judge Susan Bolton, and Arpaio was convicted for having intentionally violated a federal court order. The contempt conviction – a misdemeanor under Federal Rule 42– would have been punishable by up to six months in jail if Trump hadn’t pardoned him.

Back to Arpaio’s legal battles with Chris Cuomo, who said “felony” when he should have said “misdemeanor.” Cuomo did use the wrong language in his intro; thereafter, the journalism that followed correctly identified Arpaio’s contempt conviction as a misdemeanor, and correctly reported the surrounding facts.

There are certainly contexts in which the difference between saying someone was convicted of a  “felony” is meaningfully different from saying that the person committed a “misdemeanor.” Arpaio’s legal history, however, isn’t one of them. Judge Lamberth appeared far from impressed about the difference in his dismissal order, writing:

Mr. Cuomo’s error amounted to a mistake in legal nomenclature that was contextualized by the report that immediately followed the erroneous statement.

… the sting or gist of the statements, when taken together, was that Mr. Arpaio flagrantly disregarded a court order, which resulted in criminal charges and an eventual conviction.

Furthermore, Arpaio would have needed to prove that Cuomo or CNN acted with “actual malice” and Arpaio’s claim didn’t even come close on that front. The judge said so, in no uncertain terms:

And so, Sheriff Joe isn’t going to get any defamation damages to offset his rather hefty legal bills, but maybe he can capitalize on his celebrity status.

Thank you all for your support.