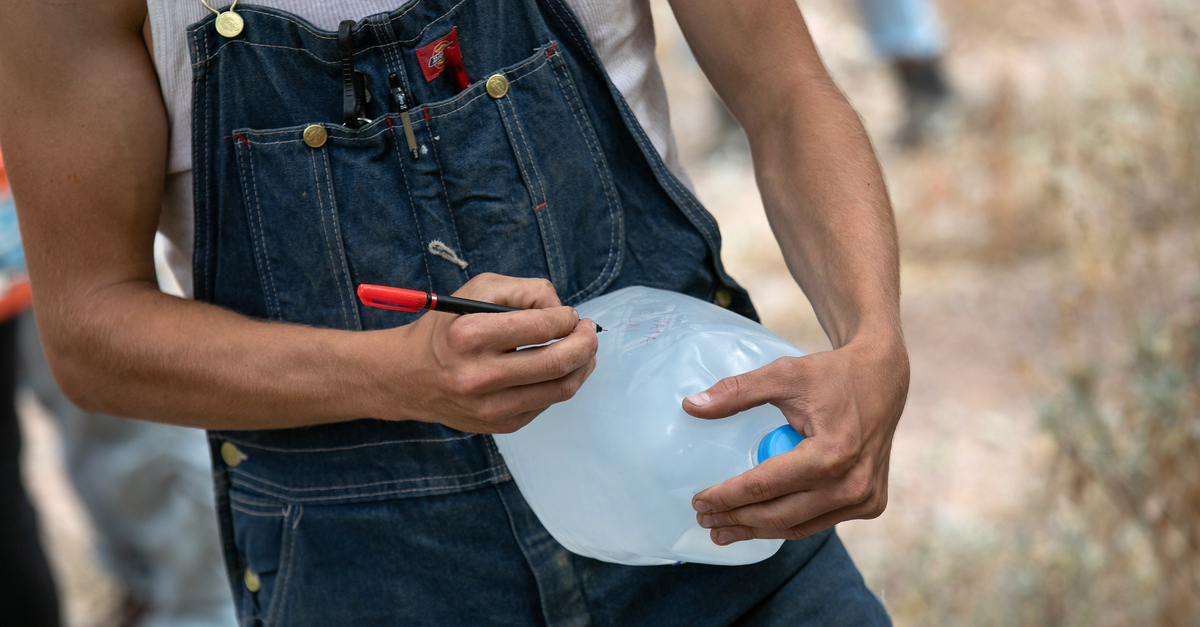 A volunteer for the humanitarian aid organization No More Deaths writes a note on a jug of water before leaving it to be found by undocumented immigrants in the desert on May 10, 2019 near Ajo, Arizona. A group of volunteers delivered food, water and blankets to remote areas immigrants pass through after crossing the border from Mexico. The number of immigrant deaths, mostly due to dehydration and exposure, has risen as higher border security in urban border areas has pushed immigrant crossing routes into more remote desert regions.

If you’re still having trouble with people complaining about the indecency of J-Lo’s pole dance, you should probably sit down a minute before reading on. Our government just paraded some arguments through a federal courtroom that are sure to make you wide-eyed.

The case is United States v. Natalie Renee Hoffman, et. al., in which a group of humanitarian aid workers volunteering with aid group “No More Deaths” left water and food on a path undocumented immigrants frequently use to cross the Sonoran Desert. Several other aid workers for the group have already been acquitted after a trial in which the court forbade the parties from even mentioning the Trump administration.

In the Hoffman case, though, four defendants were convicted for violating the regulations of the Cabeza Prieta National Wildlife Refuge. The regs we are talking about here are trespassing without a permit and prohibitions against littering; the defendants were found to have left food and water bottles in areas where people frequently die of dehydration. After their conviction, the defendants appealed on the basis that under the federal Religious Freedom Restoration Act (RFRA), they are entitled to a religious-based exemption from the applicable statutes. Apart from the obvious question of whether we’re seriously prosecuting people for leaving water for people walking through the desert, all that legal background is relatively unremarkable.

Where things get nuts, though, is when we look at the DOJ’s arguments against the defendants’ use of the RFRA defense. First, the government argued that the aid workers weren’t sincerely religious enough. Never mind that these folks testified that they’d been motivated by a desire to save lives and protect the sanctity of human life. Never mind that the founder of No More Deaths modeled the group’s aid work on the life and teachings of Jesus – or even that the group worked as a ministry of a Unitarian church. These people even drew crucifixes on the water bottles they left, right next to some rosary beads and a sign saying “vaya con dios.” According to lawyers for the federal government, the overly vague goal of saving a few lives wasn’t specific enough to count as “religion.” Maybe next time, the workers should write their message in English instead of Spanish.

United States District Judge Rosemary Márquez– an Obama-appointee and the daughter of Mexican immigrants herself —  smacked down that argument:

Defendants do not claim to be practiced theologians, and they do not need to be in order to claim a religious exemption.

The next absurd argument advanced by the government was that whatever beliefs the aid workers may have had weren’t “substantially affected” by the laws prohibiting them from undertaking their missions. Under the law, a “substantial burden” exists when someone is forced to act against their religious beliefs by the threat of legal sanctions. With minimal fanfare, Judge Márquez just said “no” on that argument, too.

The real whopper, though, came last. In order for the government to succeed in throwing out the defendants’ RFRA defense, it would have had to establish a compelling interest in enforcing its law. In many religious-exemption cases, this requirement allows the government to really shine. If the government can rustle up a convincing rationale – such as public health or safety – courts are often deferential. Here, the government argued that it had a compelling interested in keeping the wildlife preserve “in its pristine nature.”  That might have worked if the site wasn’t a former active military bomb range. According to the court record, the site had unexploded munitions strewn about, and was littered with significant amounts of garbage from the many border-crossers as well as the U.S. Border Patrol agents who conduct regular on and off-road searches.

Judge Márquez had no time for the Trump Administration’s environmental argument, and pointed out that not only did the government do a lousy job of articulating anything remotely “compelling,” but that the aid workers also usually pick up other people’s trash as they deliver their food and water. With that, the court overturned the defendants’ convictions and ordered that they be reimbursed for any fines paid.