Did Gorsuch Just Signal That He Thinks the Whistleblower Should Come Forward? 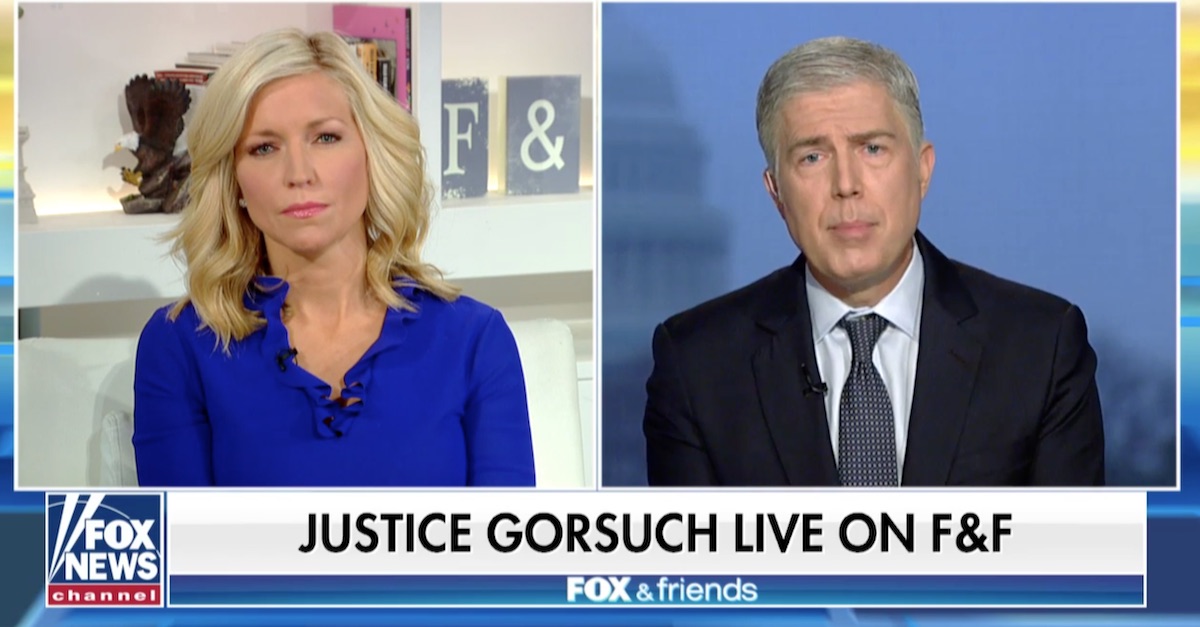 Supreme Court Justice Neil Gorsuch talked with Fox & Friends’ Ainsley Earhardt on Tuesday; in between recounting charming tales of the justices singing Christmas carols and yucking it up over Thomas Hardiman’s being used as a decoy, the two discussed Gorsuch’s Constitutional philosophy.

It sounded banally Scalia-esque at first. The justice told Earhardt that “originalism is badly understood,” and proceeded to give some professorial examples of the Supreme Court’s history of fouling things up. He mentioned Dred Scott – the 1857 decision that said the Constitution doesn’t apply to black people, and permitted slavery to continue. Dred Scott is every legal scholar’s go-to example of the Court’s falability, so nothing unusual there.

But it was Gorsuch’s next statement that made my Spidey sense tingle. He offered what was meant to be a corresponding example of SCOTUS improperly “taking away things that are there,” and cited Court’s interpretation of the Sixth Amendment’s confrontation clause. “Take the Sixth Amendment, which guarantees you a right to confront your accusers in any case against you,” Gorsuch said. “For years, the Supreme Court of the United States said no, we’re not going to enforce that right, except for when we think it’s really important,” he continued, “Originalism says no to both of those things.”

Sure, it’s possible that Gorsuch simply meant that hearsay exceptions should be more limited in criminal prosecutions. It’s just a weird example of judicial misjudgment to be used in tandem with Dred Scott — the most infamous case of all time. But hey, maybe after a rousing rendition of “Santa Baby,” Gorsuch became really passionate about criminal justice. Then again, where else did I recently hear someone talking about the confrontation clause?

Enshrined in the 6th Amendment is the right to confront your accuser.  15th century Doges allowed anonymous allegations inserted in the mouth of the lion to convict the innocent with gossip.

Paul and some other Trump supporters have argued that the identity of the Ukraine whistleblower must be revealed, because of the Sixth Amendment’s guarantees. As they see it, President Donald Trump certainly must not be denied his constitutional right to confront his accuser.

Now, I’m sure that unlike Rand Paul, Neil Gorusch actually knows that Sixth Amendment guarantees only apply to criminal prosecutions, and that impeachment proceedings are not criminal prosecutions. Still, Gorsuch’s emphasis on “accusers in any case against you” made me squirm a little. As Republicans and Democrats begin to set ground rules for Trump’s Senate impeachment trial, questions of procedural fairness and guarantees of due process are bound to arise. The Supreme Court may have its hands full with Trump’s tax return cases, but it would hardly be surprising if some impeachment-related dispute made its way to the high court.