Conservatives Elected Trump with SCOTUS in Mind, But Is Kavanaugh Just a Roberts Mini-Me? 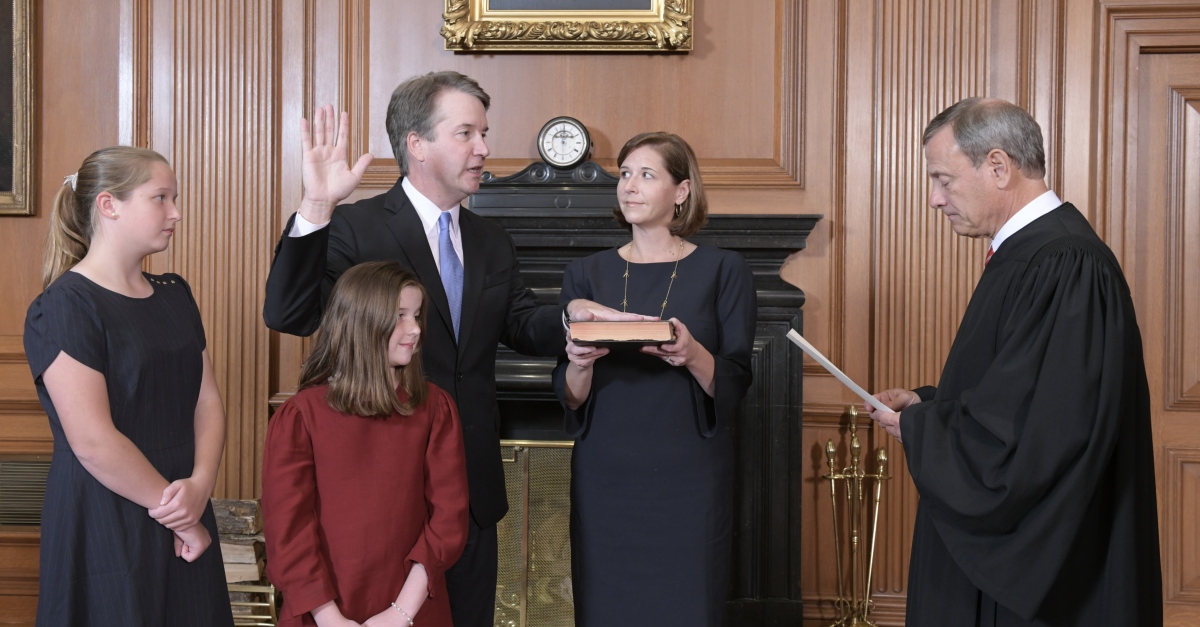 For many conservatives, one major allure of a Donald Trump presidency was the president’s determination to pack the Supreme Court with right-leaning justices. Indeed, conservatives and liberals alike took it as a foregone conclusion that freshman Justices Neil Gorsuch and Brett Kavanaugh could be counted upon to further a Trump agenda by rounding out a predictable majority.

But there’s something that such hopefuls may have overlooked: the one-two punch of a John Roberts swing-vote and Kavanaugh as the chief justice’s mini-me. Now, after Kavanaugh has taken part in 25 official SCOTUS opinions, recognition of a potentially budding bromance between the senior and junior justices is captivating court-watchers.

Kavanaugh and Roberts, both alumni justices of the D.C. Circuit Court, have voted together on the high bench in all but one official decision. The cases in which a Roberts- Kavanaugh duo have sided with the court’s liberals include both civil and criminal cases, and range from the sensational to the mundane.

For example, in March, Roberts and Kavanaugh banded with the Court’s majority to impose a duty to warn on product manufacturers federal maritime law, leaving Gorsuch, Alito, and Thomas to dissent. The case was Air & Liquid Sys. Corp. et al. v. DeVries et al, and the winning plaintiffs were two Navy veterans who had developed lung cancer as a result of asbestos exposure while serving aboard Navy ships.

There was also that time when Roberts and Kavanaugh sided with Ginsburg’s majority in the case of death row inmate Bobby James Moore; the opinion called out Texas’ appellate court for ignoring current medical standards and using outdated criteria in deciding that Moore was not mentally disabled (and therefore could legally be executed). Once again, Alito, Thomas, and Gorsuch opposed.

In the ongoing case involving the citizenship question on the 2020 census, Thomas, Alito, and Gorsuch opposed the majority’s ruling against the Trump Administration; based on the required numbers, at least one of Roberts and Kavanaugh (but perhaps both) must have sided with the majority.

While some have speculated that Kavanaugh’s choices to side with the majority in nearly every case was influenced by a desire to avoid public controversy after undergoing a hotly-contested confirmation hearing, others, such as former Clarence Thomas clerk Wendy Long, appear to believe that any intentional Roberts-Kavanaugh alliance is imagined.

“Ideological harmony” is not a valid reason for how Justices vote.

Nor is “concern” for how the Court is “viewed.”

The only valid reason for any judge’s vote is to uphold the LAW.https://t.co/TFUqXbYbOV via @usatoday

We do not have Obama judges or Trump judges, Bush judges or Clinton judges.  What we have is an extraordinary group of dedicated judges doing their level best to do equal right to those appearing before them.  That independent judiciary is something we should all be thankful for.

Sorry Chief Justice John Roberts, but you do indeed have “Obama judges,” and they have a much different point of view than the people who are charged with the safety of our country. It would be great if the 9th Circuit was indeed an “independent judiciary,” but if it is why……

While a 24 out of 25 vote-together record is noteworthy, it’s clear that there are limits to the common ground between Roberts and Kavanaugh. In February, the Court sided against the State of Louisiana in June Medical Services, LLC v. Gee, which considered the 2014 “Unsafe Abortion Protection Act.” The statute, which requires doctors performing abortions to have admitting privileges at a hospital within 30 miles of their clinic, is essentially identical to a Texas law struck down as unconstitutional in the 2016 Whole Woman’s Health v. Hellerstedt. The Court’s majority voted to stay enforcement of Louisiana’s law pending anticipated further litigation.

Writing for a four-member minority of the usual conservative suspects, Kavanaugh dissented, and refused to acknowledge that stare decisis would have dictated a vote with the majority. Chief Justice John Roberts sided with the majority against the Louisiana statute. As I wrote earlier, that vote likely had nothing to do with abortion and everything to do with Justice Roberts understanding that adherence to precedent is a key facet of his job.

What does this all mean? Still somewhat early to say. We’re just over two dozen cases into a bench that’s likely to include Roberts and Kavanaugh for decades to come.  SCOTUS will be ruling on a number of high profile cases next term, and we’ll be watching to see whether Kavanaugh will stand against the Chief Justice once his first term is behind him.