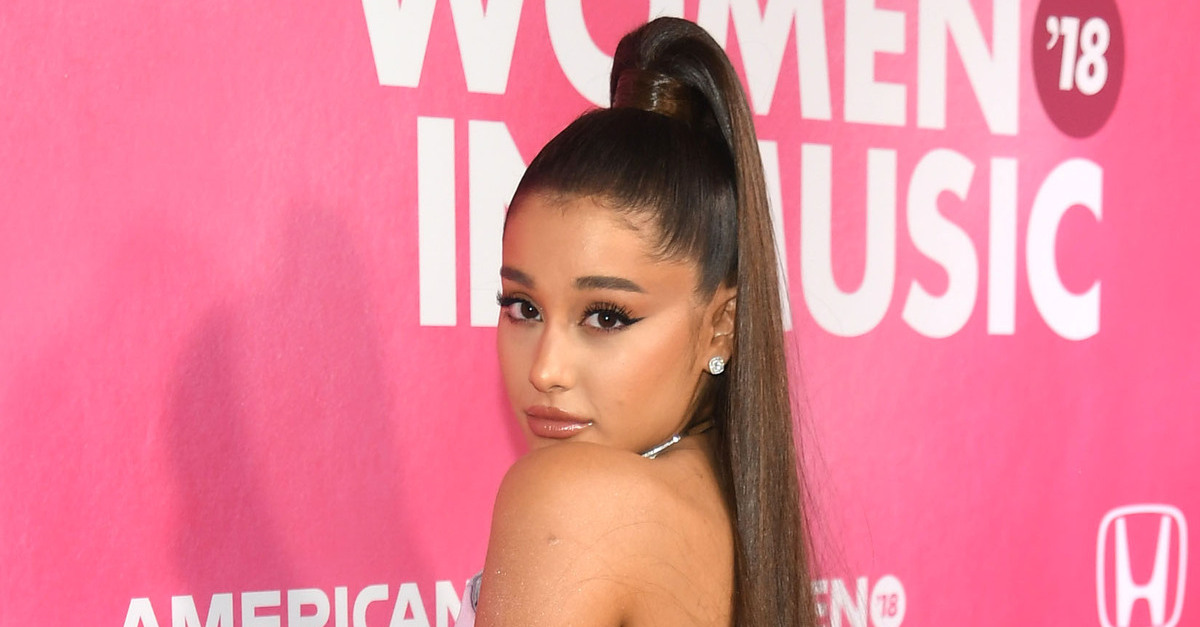 Okay so things look pretty bad for Forever 21. Not only have there been reports that the company is prepping to file for bankruptcy, but the retail chain was just hit with a massive lawsuit from singer Ariana Grande.

Ariana Grande is suing Forever 21 because she says they used a lookalike in ads https://t.co/0EMNtz2tPS

Grande sued Forever 21 and Riley Rose (the beauty company owned by the daughters of Forever 21’s founders) in federal court in California, alleging commercial misappropriation and other misuse of Grande’s image, false endorsement, and both trademark and copyright infringement. Grande’s complaint raises one glaring question: how the hell did a major retailer expect to get away with this? We at Law&Crime have no answer for that one, but we do have some things you should know about Grande’s lawsuit.

1. The evidence is going to be pretty hard for Forever 21 to get around.

Often intellectual property cases turn on the level of similarilty between items in question. Sometimes, images are similar without being legally actionable, and sometimes ad campaigns can use common styles without crossing the line to infringement. Here, though, the images look really, really bad for Forever 21. These are just a few of the images Grande claims she did not authorize. 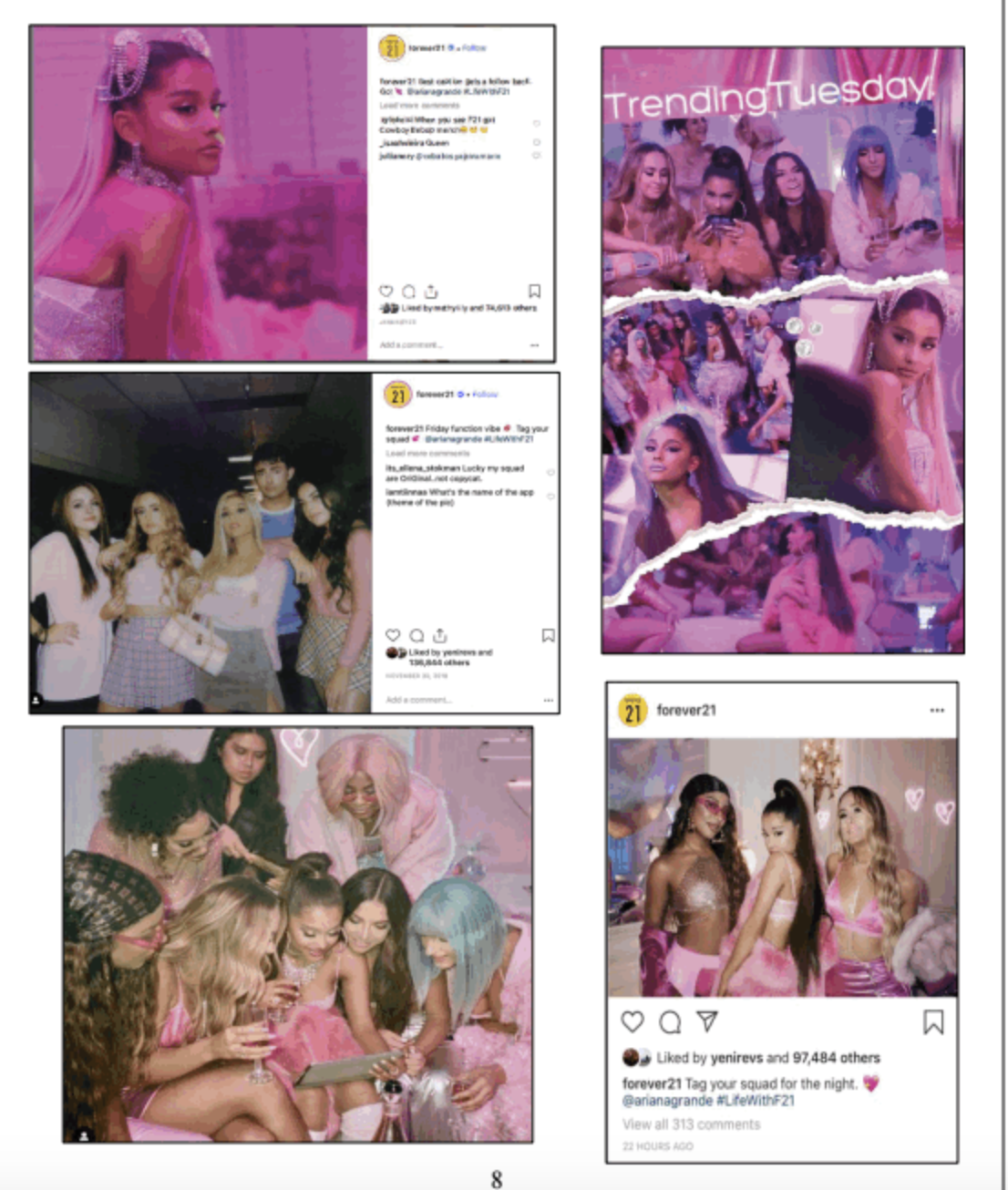 And here are some side-by-side images of Forever 21’s posts next to screenshots Grande’s actual appearance in her 7 Rings video: 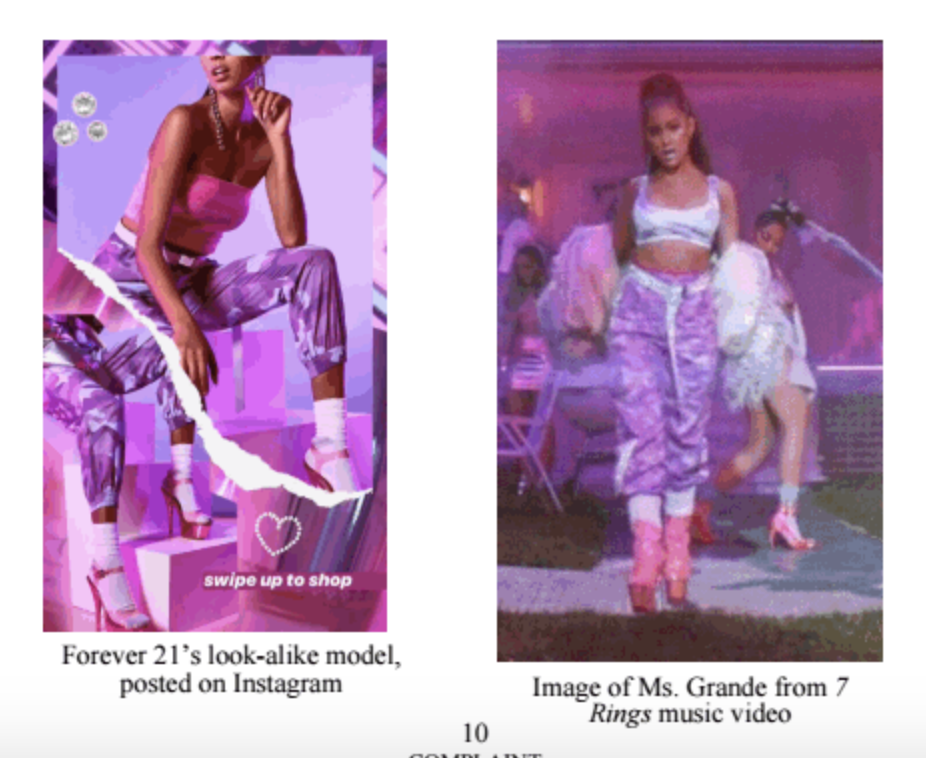 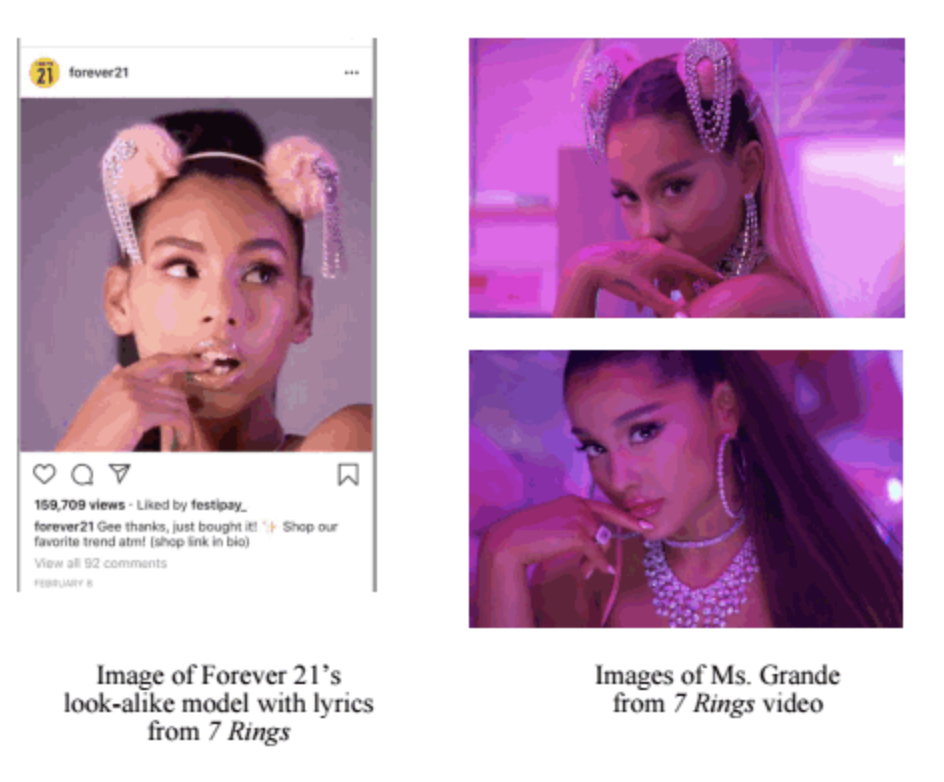 Sure, it’s theoretically possible that a jury could find the images are different enough that an objective observer wouldn’t be confused. But given the striking similarity in the posts, I wouldn’t count on it. Let’s just say the copying isn’t a good look for Forever 21.

2. Allegedly, Forever 21 wanted Grande’s endorsement, but they were too cheap, and she was way out of their league.

According to Grande, she and Forever 21 had been negotiating about potentially collaborating on an endorsement project whereby the singer would endorse the brand’s clothing and accessories.  No agreement was ever reached – and Grande says that’s because she, “explicitly declined due to Forever 21’s unwillingness to pay the fair market value for a celebrity of Ms. Grande’s stature.” The backstory on these failed negotiations isn’t necessary for Grande to win her lawsuit — but the narrative is pretty compelling. It would be tough to imagine a jury finding that any similarities in imaging were coincidences when Forever 21 had been trying to get Grande as a spokeswoman.

3. Grande took every opportunity to throw major shade at the Forever 21 brand.

In her complaint, Grande made the following allegation:

Fearing irrelevance in a rapidly evolving market with increasing competition from other fast fashion brands, rather than pay Ms. Grande, Forever 21 and Riley Rose… instead stole her name, likeness, and other intellectual property to promote their brands for free.

Ouch. No one wants to be called “fast fashion,” especially when you’ve just been accused of pretending to get a celeb endorsement. The complaint also mentions that Forever 21 sells its products “mostly to women and girls ranging in age from 14 to 24.” None of that was strictly necessary from a legal standpoint, but those kinds of statements sure do set the stage for Grande to characterize Forever 21 as a pathetic parasite looking to capitalize on her star power.

4. It’s illegal to use anyone’s image without permission — but when we’re talking Ariana Grande, illegal usage is next-level.

Ariana Grande is a major influencer. And whether or not you think “influencers” should be a thing at all, this woman has as good a claim as could ever exist for the value of her personal brand. According to the complaint, Grande is the “most-followed woman on Instagram in the world, amassing more than 160 million Instagram followers.” Like it or not, Grande’s contention that “even a single social media post can garner fees of several hundred thousand dollars, and her longer-term endorsement arrangements command fees in the millions of dollars” is very likely demonstrably true.

Before the days of paid social-media influencers, attributing a precise value to actionable misappropriation could be a difficult and daunting exercise. Now, though, as celebrities like Grande and many others are regularly paid specific rates for posts and tags, unauthorized usage can mean hefty verdicts.

5. Forever 21 appears to know it needs to settle with Grande.

In a statement released to media, the defendant retailer said as follows:

Forever 21 does not comment on pending litigation as per company policy. That said, while we dispute the allegations, we are huge supporters of Ariana Grande and have worked with her licensing company over the past two years. We are hopeful that we will find a mutually agreeable resolution and can continue to work together in the future.

Given that Grande just trash-talked the brand while demanding $1o million in damages, I wouldn’t count on them “continuing to work together” any time soon. But hey, points for being amenable to compromise, right?

6. Despite the lawsuit’s obvious strengths, some people really don’t like the fact that Grande filed it in the first place, given Forever 21’s financial woes.

Slippery slope. The model deserves a career too, doesn’t she? Forever 21 is on the edge of bankruptcy. If it happens a lot of people will lose their jobs. Ms. Grande is worth $100 Million.
Fans needs to rethink celebrity worship. They don’t give a $hit about you. pic.twitter.com/ISezJkjt82

This is so dumb. Just let forever 21 live they’re already in a bad place rn