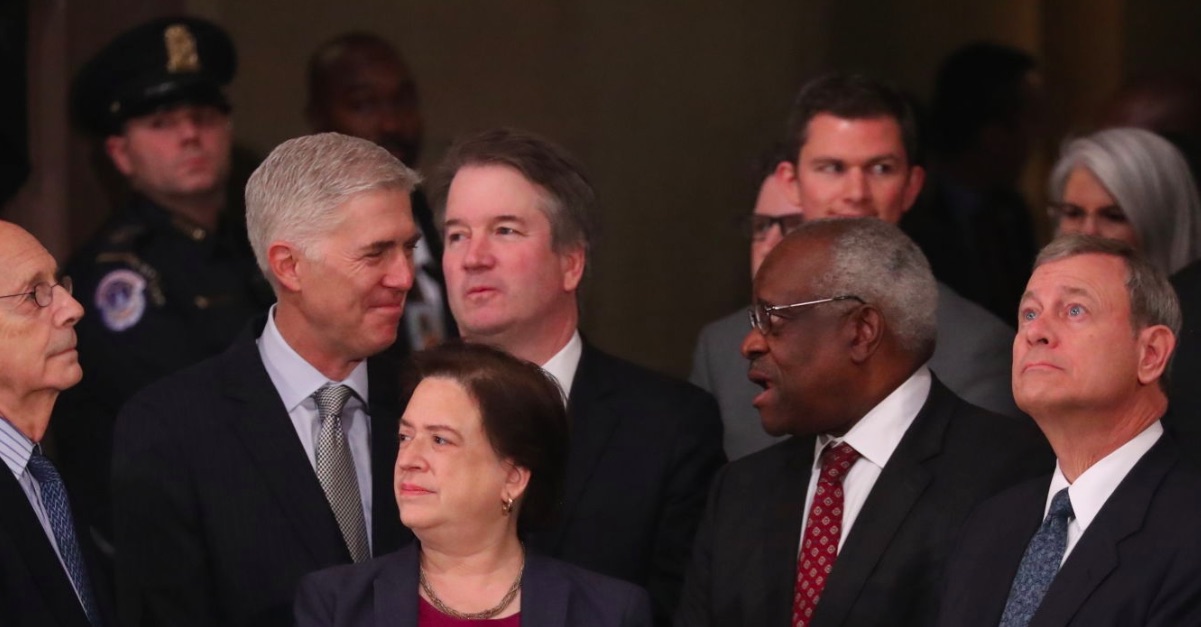 SCOTUS’s October term begins Monday, and the cases before the Court are about as high-stakes as possible. Some have even said that it’s shaping up to be a “blockbuster” term. It’s almost an election year, and we’re about to see how President Donald Trump’s two appointees measure up to expectations. Here are four cases everyone should be watching.

With LGBT-hero Anthony Kennedy gone, proponents of LGBT equality are bracing themselves for what the future of LGBT law will hold now that Brett Kavanaugh and Neil Gorsuch sit on the nation’s highest Court.

The three cases above have been consolidated. They all present the same question to the Court: is it legal for employers to discriminate on the basis of sexual orientation and gender identity?

We’re not talking about some amorphous right to pit your religion against someone’s wedding cake; we’re talking specifically about Title VII of the Civil Rights Act of 1964 — the federal statute that was adopted for the purpose of ending discrimination. We already know that under that law, discrimination on the basis of sex (sixties-speak for what we now usually call “gender”) is a no-no. This trio of cases affords the Court the chance to opine on the precise nature of sexual orientation and identity.

Is homosexuality simply an example of gender non-conformity? Would firing a woman for being married to another woman be legally equivalent to firing her for refusing to wear dresses? If Kennedy were still on the bench, we’d likely see him agree with the Seventh Circuit’s take on this issue, that “A policy that discriminates on the basis of sexual orientation does not affect every woman, or every man, but it is based on assumptions about the proper behavior for someone of a given sex.”

But Kennedy is not there. Instead, we’ve got Kavanaugh, a justice that appears ever-willing to prioritize individual beliefs (especially if they can somehow be tied to religious ones) over fighting discrimination. The case is also occurring against the landscape of an administration determined to narrow individual civil rights. The U.S. Department of Justice has already taken the official position that employers can discriminate against a person on the basis of gender identity without violating federal law. Furthermore, the DOJ has recently wedged itself into a lawsuit between a gay teacher and the local archdiocese that demanded his firing — taking the side of the archdiocese. The federal government’s position on those cases and others may be indirectly affected by SCOTUS’s ultimate holding on the issue of discrimination.

The oral arguments and corresponding decision in this trio of cases are bound to be interesting. Unlike other LGBT legal issues, this one is firmly attached to a congressional statute – one which was clearly predicated on stopping gender-based discrimination (among other things). SCOTUS may still find a way to weasel out of protecting LGBT people, but it won’t be easy.

This is another round of President Trump v. New York Attorney General Letitia James. The controversy is over New York City’s prohibition against carrying a licensed, locked and unloaded handgun outside the city limits.  The petitioners argue that the ban violates the Second Amendment and impedes their right to keep arms in their homes; the logic (tenuous as it may be) goes that if folks can’t transport their guns to gun ranges and vacation houses, then it’ll be too much trouble to keep them in their homes at all.

The Court, which has declined to get involved with gun disputes in recent years, could have bowed out on grounds that the case was moot. After all, NYC did take steps to relax the contested regulation. Instead, SCOTUS opted on Monday to keep the case on the docket for the December 2 oral arguments.

“The Respondents’ Suggestion of Mootness is denied. The question of mootness will be subject to further consideration at oral argument, and the parties should be prepared to discuss it,” the Court said.

Welp, we already talked LGBT and guns, so you had to know we wouldn’t get out of this term without mentioning abortion. The Court agreed on October 4 to hear a challenge to Louisiana’s “Unsafe Abortion Protection Act,” which requires all doctors performing abortions to have admitting privileges at nearby hospitals. The law’s challengers say that the requirement is so burdensome that upholding it would mean that only one doctor in the state would be left to meet the needs of Louisiana’s women — which number annually upwards of 10,000 abortions.

Before anyone gets too excited, this is a reminder that the June Medical Services case does not present the question of whether or not to overturn Roe v. Wade. Instead, it tests the limits of Planned Parenthood v. Casey, the post-Roe case that said states may regulate pre-viability abortions so long as those regulations aren’t so strict as to constitute an “undue burden” on women.

Louisiana will argue that its law is NBD and doesn’t create much of a burden on women seeking to exercise their rights. Opponents will point to both common sense and the almost-identical Texas law that was already struck down in 2016 (Whole Woman’s Health v. Hellerstedt).

This case will serve as an excellent barometer for this Court’s willingness to throw stare decisis out the window and rise to the expectations of Gorsuch’s and Kavanaugh’s benefactor. Trump has, many times, promised to deliver a Supreme Court that will eradicate reproductive freedom; if this Court can find a way to reconcile opposite outcomes in Whole Woman’s Health and June Medical Services, we’ll know where we stand with this bench.

4 .   Department of Homeland Security v. Regents of the University of California

Back in in September 2017, Trump ended Barack Obama’s Deferred Action for Childhood Arrivals program (“DACA”); the order was set to go into effect six months later. The DACA program was conceived as to a short-term plan to prioritize use of the federal deportation budget.

Obama directed DHS to allow “certain young people” (who might have been deported) to apply for a two-year deportation deferment after they’d passed a background check.” Trump, hell-bent on appearing tough on immigration, rescinded DACA, and then punted the entire political football to Congress, giving it six months to legalize DACA if that’s what it chose to do.

The resulting litigation was fast-tracked to the Supreme Court, and DACA was kept in place during the pendency of the case. Taking up the DACA issue was a bold move by SCOTUS; it could easily have dodged the case, and let a pro-DACA Democrat succeed Trump in office, thereby mooting its involvement.

Even if SCOTUS wanted to side with Trump on DACA, it could have done so by deferring to the president’s broad authority on immigration matters. But the high Court did get involved. Now, we’re left to see what the Court will do with the authority it has chosen to assert.