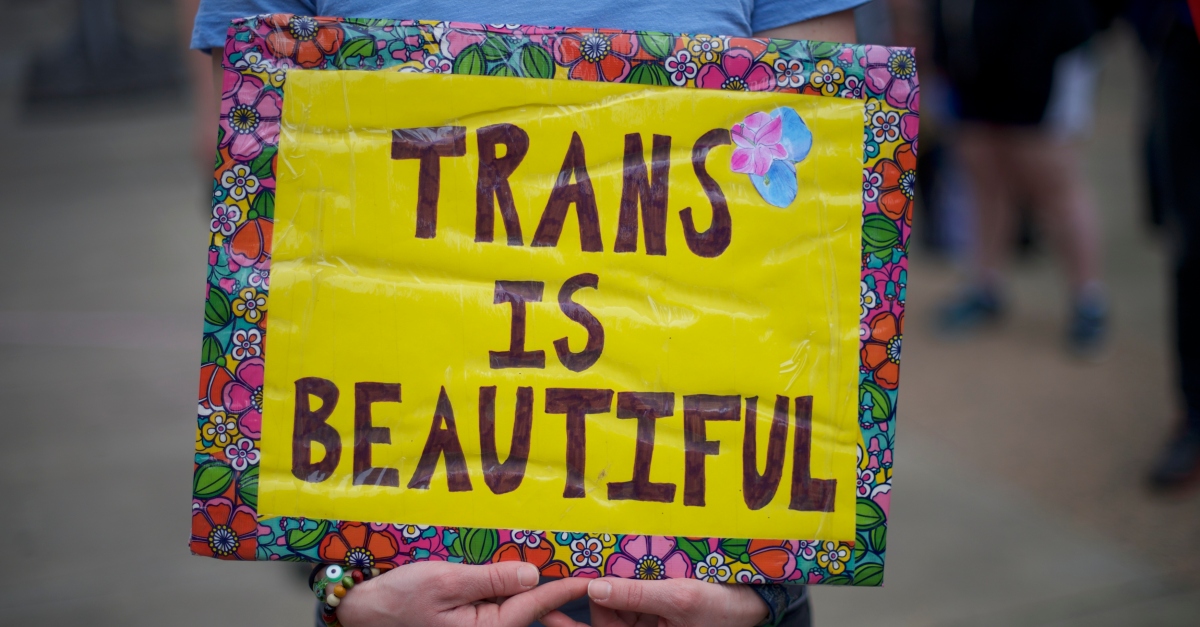 The Department of Justice has expressed the view that businesses can discriminate against employees based on their gender identity without violating federal law. Solicitor General Noel Francisco made the controversial argument in front of the Supreme Court during oral arguments on Wednesday.

During his remarks and in a brief, Francisco said that civil rights laws banning sex discrimination in employment don’t cover transgender bias–a break from the Trump administration itself, which has argued differently by way of another agency.

Essentially, the EEOC believes that federal law protects individuals from workplace discrimination on the basis of sexual orientation and gender identity. The DOJ says Congress never had such protections in mind when it passed the laws in question.

The case currently in front of the Supreme Court was brought by a Michigan funeral home whose owners fired transgender worker Aimee Stephens. The EEOC sued on Stephens behalf and won in front of the Sixth Circuit Court of Appeals. The funeral home then appealed in the case stylized as EEOC v. R.G. &. G.R. Harris Funeral Homes.

The Sixth Circuit’s opinion in favor of Stephens last year was the first time a federal appeals court had concluded that transgender bias is considered sex discrimination under the landmark Title VII provisions of the 1964 Civil Rights Act. The same court had previously moved in that direction, however, finding that transgender discrimination is a prohibited form of sex stereotyping.

It is analytically impossible to fire an employee based on that employee’s status as a transgender person without being motivated, at least in part, by the employee’s sex.

Francisco claimed that the Sixth Circuit got it wrong because the DOJ is the only agency with the authority to represent the government before the Supreme Court. In a brief filed with the nation’s high court, Francisco argued:

The court of appeals misread the statute and this Court’s decisions in concluding that Title VII encompasses discrimination on the basis of gender identity.

That rift-causing brief comes on the heels of a trial balloon suggestion by the administration’s Department of Health and Human Services to limit the agency’s own definition of gender to the sex assigned a child at birth.

Reports of that potential change in federal definitions were almost universally met with scorn and disgust–especially because President Donald Trump has previously campaigned on protecting the rights of the LGBT community–though some conservative outlets and commentators applauded the possible shift.

Gavin Nevins is an attorney for gay rights organization Lambda Legal. In comments to Bloomberg News, Nevins slammed Francisco’s shocking turn in front of the Supreme Court. He said:

This administration is not a friend of the LGBT community. They can say what they what they’re going to say, but the courts will have the final word…[The Stephens/EEOC lawsuit] not only sounds like a viable sex discrimination case, but a slam dunk case.

While the argument from the Trump administration conflicts with itself and some of the president’s own rhetoric on the campaign trail, the source of the argument–Noel Francisco–shouldn’t be shocking at all.

Francisco is a longtime fixture of the conservative movement and various reports have pegged him as Rod Rosenstein‘s successor at DOJ should the latter man resign or be fired anytime soon.