On This Week’s ‘Objections’ Podcast: Historical Reckonings with the 66-Year-Old Lynching of Emmett Till and the 106-Year-Old Armenian Genocide 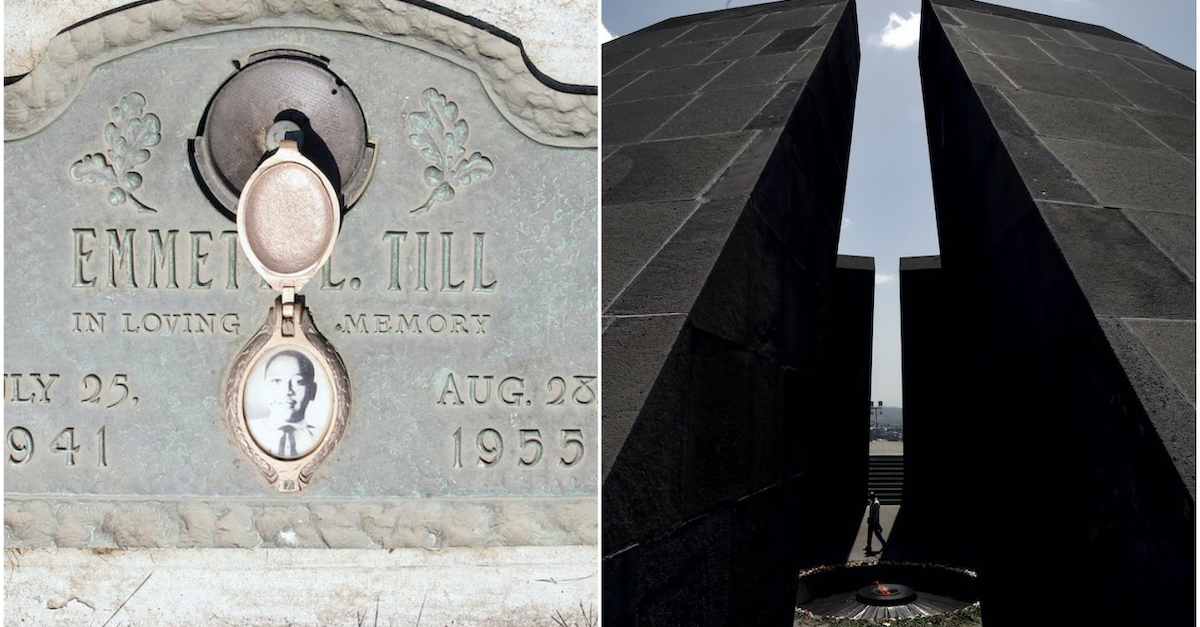 At a press conference following the Chauvin verdict, Philonise Floyd invoked Till’s memory by calling him the “first George Floyd.”

Watts, the co-founder of the Emmett Till Legacy Foundation, welcomed that comparison.

“We had spent some time together a few days before that,” Watts recalled in an interview. “And I believe that just in sharing that bond, we were able to embrace and just understand each other’s journey and pain, in sharing the story of Emmett Till.”

In 1955, Till’s kidnapping, torture and murder at the age of 14 focused the world’s attention to the brutality of lynching. Till’s murderers shot him in the head, attached a 75-pound cotton gin fan to his neck with barbed wire and tossed him into the Tallahatchie River in Mississippi.

When Emmett’s body was recovered from that river, his mother Mamie Till Mobley made a history-changing decision to open the casket and invited the world to share her torment in gazing upon her son’s disfigured face. That act animated the civil rights movement and is chronicled in a wrenching exhibit at the National Museum of African American History and Culture in Washington D.C.

“She opened that casket so the world could see what hate looked like, and what they did to her only child,” Watts recalled.

Floyd’s family opened the casket at his funeral in a nod to Till, and Watts recounted being at a funeral for a relative when she learned that the jury returned a verdict against Chauvin. All waited by Watts’s phone in anticipation to hear the findings.

“So I’m standing at a outlet, looking a my phone, and all of a sudden, I just dropped to my knees, and my relatives,” Watts said. “That’s when I heard the verdict, and then I told them, ‘Guilty on all three charges.’ […] It was muffled for me, because I was—I was in this weird zone, I’ll tell you. But it was a zone of relief, but only for a moment.”

George Floyd’s family waited a little less than a year to see his killer brought to justice.

Till’s family has been waiting 66 years. The two white men who later confessed to lynching Till were acquitted by an all white, all male jury, living the rest of their lives as free men. The woman who accused the young boy of whistling at her, Carolyn Bryant Donham, reportedly recanted that claim to the author of The Blood of Emmett Till, a book by Timothy Tyson that rekindled the investigation.

In another historic moment this week, President Biden officially recognized the Armenian genocide — an act 106 years in the making.

For more than a century, the Armenian genocide would go unrecognized by the United States.

First, the world lacked the language to describe a campaign of mass extermination, and once historians did in the post-World War II era, political considerations took over because of the complicated relationship between the United States and Turkey, an important NATO ally that continues to deny the genocide. Republican Ronald Reagan had come closest by saying the words together, but he did not follow up with a formal recognition.

Then on Saturday, President Biden broke the spell in a statement: “The American people honor all those Armenians who perished in the genocide that began 106 years ago today.”

Taşpınar, a senior fellow at the Brookings Institution and the author of the book “What the West Is Getting Wrong about the Middle East,” explained why Biden’s statement was so significant and taboo.

In an essay recently republished on Brookings, Taşpınar explained that he initially intended to join the Turkish foreign service before he was arrested for even discussing the Armenian genocide in the 1990s. That experience led him into a life of scholarship in the United States.

Though a consensus view among historians, the Armenian genocide is widely seen with denial in Turkey, where the government commonly depicts it as a foreign plot to sow division. The country’s strongman Recep Tayyip Erdoğan has in the past threatened to recognize the genocide of Native Americans if the U.S. dared to recognize that of the Armenians, which, to Taşpınar, shows how disconnected Turkey is from the Western view of history.

“We also have to explain to Turks that there is actually in the West, a much more open debate about the past history, and countries that are democratic countries that have confidence can come to terms with their history,” Taşpınar said on the podcast.

Genocide has a legal definition, and Taşpınar said part of what Turkey fears is the fallout.

“It could pave the road for a United Nations may be kind of situation, a kind of international condemnation of Turkey, not only in many European countries, as it happened before, but maybe even at the United Nations a condemnation of Turkey’s actions in 1915,” Taşpınar said. “And that, that I think, scares the Turkish Government, because it would not only create this humiliation, but also potentially pave the road for territorial financial compensation from the Republic of Armenia.”

For Watts, the goal of confronting the United States’s history is accountability too—on an immediate level, a trial that Till’s mother never lived to experience. Her foundation has been petitioning the FBI and Mississippi’s District Attorney DeWayne Richardson, for the Fourth Circuit Court District, to charge Bryant Donham.

Neither the FBI or Richardson answered press inquiries about the status of the investigation.