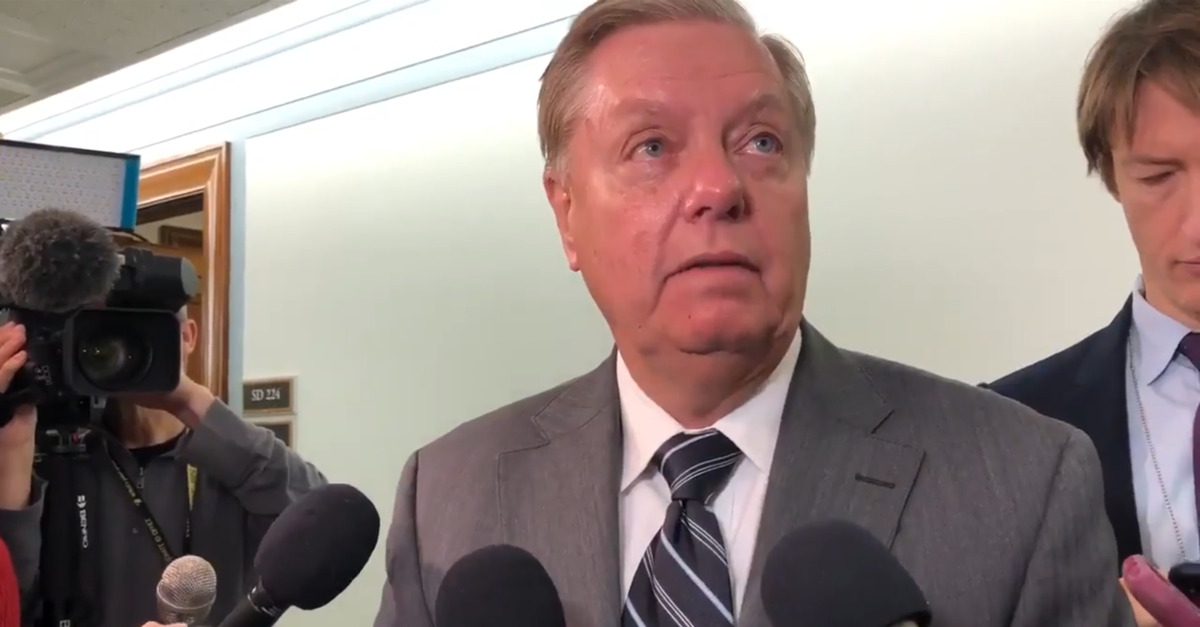 President Donald Trump by calling the House of Representatives’  informal impeachment inquiry a “lynching” compared himself to a murdered and mutilated African-American on Tuesday morning.

The comparison was widely and quickly criticized almost across the board. Breaking the dam of near-unanimous disavowal, however, was southern Sen. Lindsey Graham (R-S.C.), who staunchly defended the House’s impeachment of former president Bill Clinton in 1999.

“I think that’s pretty well accurate,” Graham said. “This is a sham. This is a joke. I’m going to let the whole world know that if we were doing this to a Democratic president you would be all over me right now. This is a lynching, in every sense. This is un-American.”

Legal and politics experts were astonished by Graham’s endorsement. The ugly and distinctly American history of ritualistic, group-conducted murder of African Americans soon came to the fore of Tuesday’s political discussion; specifically the role that Graham’s own South Carolina played in that national movement of racial terrorism.

“Nearly 200 of the 4,000 lynchings accounted for by [the Equal Justice Initiative] occurred in Lindsey Graham’s home state of South Carolina; five in his home county of Pickens, S.C.,” noted senior counsel for the Brennan Center’s Justice Program Ames Grawert. “It is inexcusable for Graham to trivialize this history of violence and hatred.”

According to the Equal Justice Initiative, at least 185 lynchings of black Americans occurred in South Carolina from 1877-1950.

“[A] fun fact is that Graham is from Pickens County, South Carolina where, in 1947, 24-year-old Willie Earle was taken from a jail and murdered in what was the last lynching to occur in the state,” noted New York Times opinion columnist Jamelle Bouie.

The Greenville News sets the scene before that mob murder:

By ones and twos, the coupes and sedans, taxis and private cars eased out of Greenville, unnoticed in the chill darkness of the wee hours, some edging along West Court Street where sheriff’s deputies came and went from their first-floor headquarters.

They would assemble at the Saluda River Bridge on what is now State 124, bolster each other’s courage one last time, then cross into Pickens County on a mission of retribution.

South Carolina’s last lynching was less than an hour away.

The participants were 31 white men–including businessmen and members of “prominent local families,” according to the outlet.

“All 31 men who had been charged in Earle’s murder were acquitted,” noted CBS News‘ Grace Segers. “Lynchings did not take place in the distant past. The word should not be used casually without context.”

“[L]ynching isn’t some phenomenon of the distant past,” Bouie later added. “[G]raham is just 8 years removed from a lynching in his home county. [A]nd a little more than month after graham was born, Emmett Till was lynched in Money, Mississippi.”

Orlando Patterson is the John Cowles Professor of Sociology at Harvard University and an expert on the tradition of lynching.

According to Cowles, lynchings like Earle’s were a sort of religious ritual for the heavily Christian southern United States.

“The South, as the most Christian part of the nation, felt that it must have committed some great sin for that bunch of feckless, effete Northerners to defeat them,” he told Harvard Magazine in 1999. “You symbolically cast them out by ritually sacrificing them.”.

Against this backdrop, Graham’s comments were harshly received.

Here’s a non-exhaustive list of key senses in which impeachment is _not_ a lynching:

1) It is not racially motivated.
2) It is a legal process expressly set forth in the text of the Constitution.
3) It doesn’t result in death of person being lynched. https://t.co/dE9Ej72aPn

Law&Crime reached out to Graham’s office for comment on this story but no response was forthcoming at the time of publication.