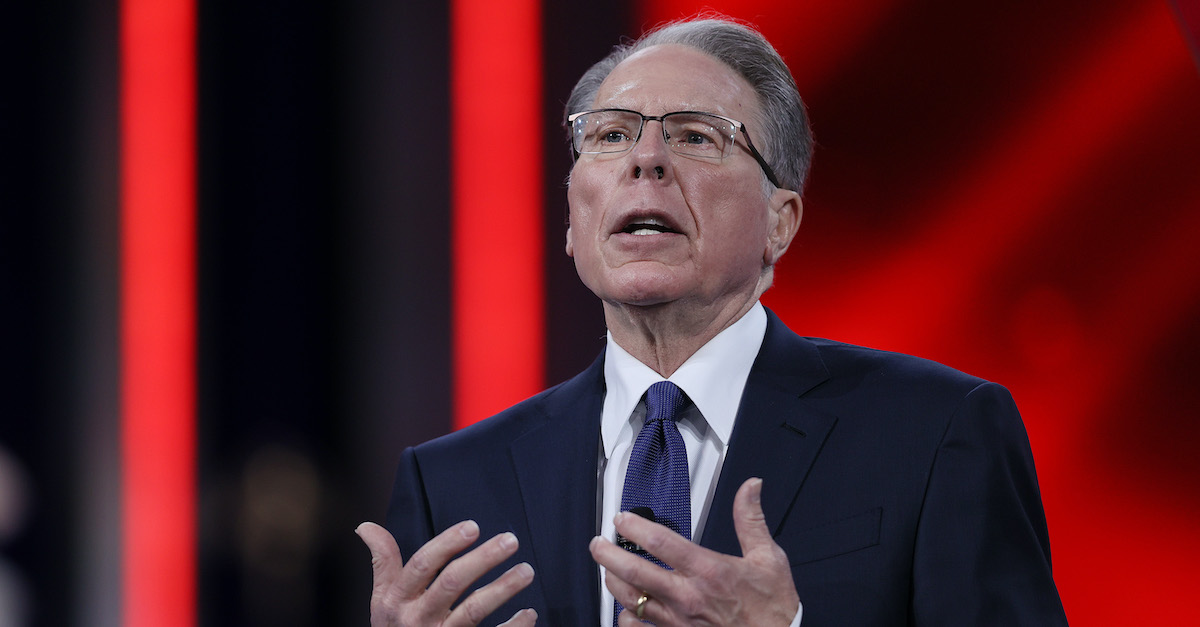 With the trials of Kyle Rittenhouse and Ahmaud Arbery’s accused murderers coming to a head in November, U.S. gun law and policy have captured global attention the same month a new book exposes the inner workings of the National Rifle Association—an enormously influential group in shaping these topics.

NPR’s investigative correspondent Tim Mak’s book “Misfire: Inside the Downfall of the NRA” details what the author describes in an interview as the “serious existential threat to the NRA” posed by New York Attorney General Letitia James’s (D) lawsuit seeking its dissolution.

“The NRA has in the past dealt with revolts from its members. It’s dealt with legal problems. It’s dealt with allegations of financial malfeasance and dealt with just incredible challenges from within and disparate factions in-fighting,” Mak says on the latest episode of Law&Crime’s podcast “Objections: with Adam Klasfeld.”

“But it’s never dealt with all of these things happening all at once and in this acute crisis,” Mak added.

James, for her part, campaigned for attorney general by calling the NRA a “terrorist organization.” Now, she’s running for governor.

“The Gold Standard of Investigative Reporting”

The tumultuous tenure of NRA’s longtime executive vice president Wayne LaPierre—spanning three decades and counting—has weathered many crises, from school shootings in Columbine and Sandy Hook to the Russian government’s infiltration of the group through Maria Butina, who was convicted of acting as an unregistered foreign agent.

In the interview, Mak details how he how he broke the Butina story and the dramatic story about how he obtained a trove of sealed court documents for his exposé during the height of the COVID-19 pandemic — a journalistic caper reminiscent of “All the President’s Men.”

With all forms of public transportation shut down in early 2020, Mak recalls renting a moped and “driving for what seems like hours and hours and hours” to meet the source, who rolled down the passenger window.

“The source’s documents are in the passenger seat, and I reached in. I grabbed the documents taking care not to breathe into the car,” Mak recalls, laughing. “I’ve put them in my backpack, and I moped away. And these documents are just amazing.”

They include sworn documents under seal by the likes of LaPierre, the NRA’s ex-president Oliver North and the organization’s other senior officials.

“This is like the gold standard in many ways of investigative reporting, right?” Mak recalls thinking of the trove.

“‘Hillbillies’ and ‘Idiots’ and ‘Nuts’ and ‘Fruitcakes'”

That just scratches the surface of what Mak obtained during his research, spanning more than 120 interviews and including more than 2.5 hours of secretly recorded audio of NRA officials strategizing—and denigrating their members—after the Columbine shooting.

“You hear NRA officials denigrate the people who might show up as ‘hillbillies,’ and ‘idiots’ and ‘nuts’ and ‘fruitcakes,'” Mak recalls. “You hear Wayne LaPierre, the CEO of the organization, Marion Hammer, former president and longtime lobbyists, advisors, advertising people. And what you hear is this kind of snickering in the background, just kind of knowing snickering. But what’s so shocking about this, of course, is that these are the people who are most dedicated to the NRA’s mission.”

Reports of the NRA’s private derision toward its members and the personal extravagance of its leaders have caused backlash and turmoil inside the organization.

“There are definitely a lot of NRA members angry about the current situation inside the organization,” Mak said. “There’s no doubt about it, that there is even an organization called Save the Second, which is made up of NRA members demanding transparency and accountability. There are members of its own board, the NRA’s own board, that are protesting the NRA’s current spending.”

LaPierre’s ill-fated decision to petition for bankruptcy in order to avoid the New York attorney general’s lawsuit put the NRA’s leaders and ledgers under a harsh public glare. The bankruptcy trial brought steady headlines of LaPierre’s $300,000 purchases of Italian suits from a Beverly Hills Zegna, private air travel for him and his family and excursions on Hollywood producer Stanton McKenzie’s 108-foot yacht, “Illusions.”

With the IRS reportedly investigating LaPierre for criminal tax fraud, “Misfire” reports that the NRA chief has been quoted telling those around him that he’s afraid to go to jail.

“I think that, you know, Wayne LaPierre, probably, you know, everything that I’ve learned about him as a man who’s driven by fear and totally just riveted by anxiety, it wouldn’t shock me at all, that he’s deeply afraid of going to jail for what there’s plenty of evidence already in the public domain that he’s done,” Mak said.

“In testimony during the NRA’s bankruptcy proceedings, one of his longtime friends and associates testifies that Wayne LaPierre has openly said that he’s worried about going to jail for what he’s done,” Mak noted.

“The Spine of a Chocolate Eclair”

“Misfire” paints a surprising portrait of a leader of one of the most confrontational non-profits in the United States as weak, conflict-averse and, in the words of one quoted associate, possessing the “spine of a chocolate eclair.” How such a personality transformed a once bipartisan organization to a flashpoint of the political right of U.S. culture wars is what the author describes as one of the book’s “ironies.”

Under the image cultivated by LaPierre’s tough-talking bluster that the “only thing that stops a bad guy with a gun, is a good guy with a gun”—a comment he made after the carnage of the Sandy Hook massacre—is a leader who’s far from a marksman.

“Another irony, of course, is that Wayne LaPierre doesn’t like to shoot firearms. He’s not he’s not a gun guy, and in fact, is not only bad at shooting firearms, can be downright dangerous with it,” noted Mak, making a point apparent to anyone who viewed leaked footage of the exec’s elephant hunt in Botswana.

In the book’s telling, LaPierre’s aversion to conflict allowed contractors to pull the NRA in self-interested directions with damaging business and public relations implications.

“What they’ve all realized over time is that if you bully Wayne LaPierre, you yell at him loudly enough, he’s eventually going to green light millions of dollars and sweetheart deals for people who have inside connections with the NRA—or golden parachutes for people who are who are senior executives, who are leaving the organization and want to get paid for doing virtually nothing at all,” Mak said.

Despite the prospect of court-ordered obliteration if New York’s attorney general succeeds, the NRA’s “Downfall” of the book’s title comes with an asterisk.

“I am aware that many people have predicted the NRA’s collapse, and Wayne LaPierre is still the head of the NRA,” Mak noted. “The NRA still exists, despite those many predictions, and so I wanted to sound a little note of caution about how resilient it seems the NRA and Wayne LaPierre have been over time.”