‘The Elephant in the Room’: Wayne LaPierre Grilled on Botched Botswana Hunt in U.S. Bankruptcy Court 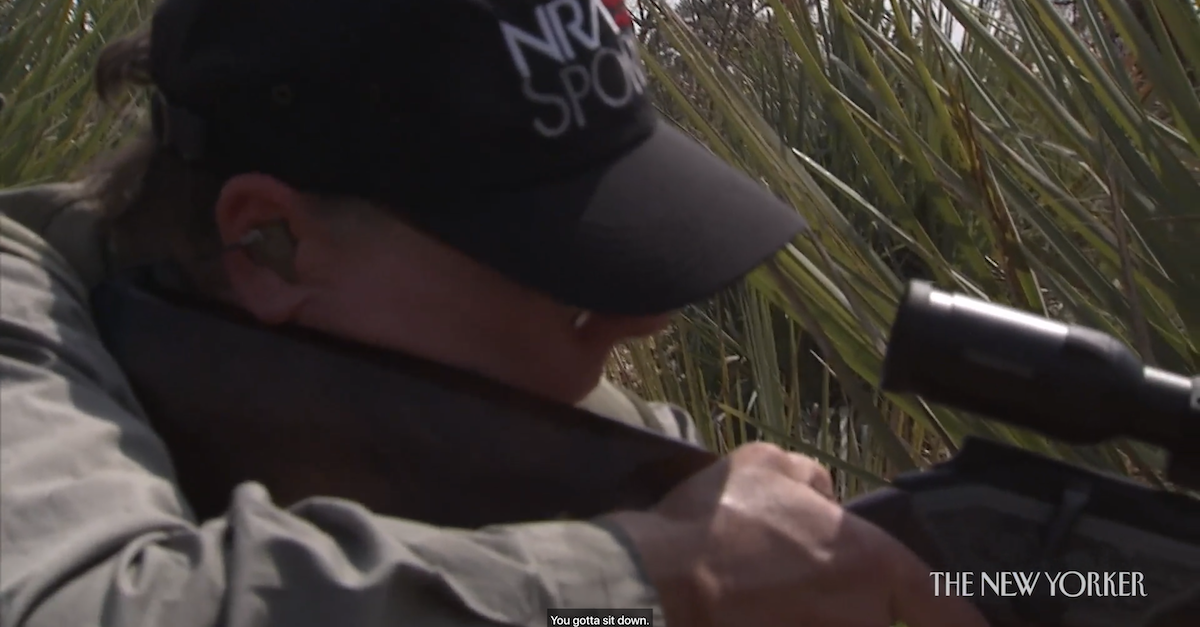 Video of NRA chief Wayne LaPierre’s botched elephant hunt made its way into his testimony during the group’s federal bankruptcy trial.

Days after the New Yorker and The Trace jointly released footage of his botched elephant hunt in Botswana, National Rifle Association chief Wayne LaPierre faced questions about the embarrassing video during the group’s federal bankruptcy trial on Thursday.

A lawyer for the NRA’s former publicity firm Ackerman McQueen cited the footage, widely viewed as a public relations disaster for the gun group, to undermine the CEO’s testimony that he aimed to appeal to “mainstream America.”

“Not to ignore the elephant in the room, but let’s talk about elephants,” attorney Mike Gruber said.

An outtake of the 2013 Botswana hunting trip for the once-NRA sponsored TV show “Under Wild Skies,” the previously unseen footage shows LaPierre shooting at the elephant once, wounding the creature, and then again three times from point-blank range in the wrong spot. The show’s host delivered the kill shot in LaPierre’s place.

Later that day, Susan LaPierre showed herself to be a better shot than her husband. After guides tracked down an elephant for her, Susan killed it, cut off its tail, and held it in the air. “Victory!” she shouted, laughing. “That’s my elephant tail. Way cool.”

Asked about whether the footage and the cascade of embarrassing headlines that grew out of it, LaPierre answered generally: “I understand that there have been newspaper articles.”

“I haven’t read them,” LaPierre added.

Gruber attempted to press the matter further by asking whether the public relations fiasco landed poorly with both hunters and non-hunters, but the NRA’s lawyer Greg Garman jumped to object to the line of questioning as irrelevant and “highly objectionable.”

Although Gruber cast the tapes as relevant to LaPierre’s focus on his mainstream appeal, U.S. Bankruptcy Judge Harlin Hale cut him off: “I don’t think we need to go there, Mr. Gruber.”

The brief and interrupted exchange fell at the tail end of LaPierre’s second round of questioning. The NRA executive vice president and CEO had previously testified some six hours roughly two weeks ago, when called by the office of New York Attorney General Letitia James (D). The attorney general sued to shut down the 150-year-old gun group for violating the state’s charity law, alleging that LaPierre and other executives used the NRA as a personal “piggy bank.”

Earlier this year, LaPierre opened up a company Sea Girt LLC in Texas, which filed for bankruptcy on the NRA’s behalf—allegedly, without informing the group’s board. The attorney general says that Sea Girt is little more than LaPierre’s “wholly owned shell company” to establish a toehold in the Lone Star State for bankruptcy, in an effort to duck her lawsuit.

Some observers believe the NRA’s gambit backfired, with the bankruptcy trial leading to a number of embarrassing revelations.

On April 7, LaPierre testified about his lavish lifestyle on the dime of the NRA, its donors and its friends, including flying exclusively by private charter jet. LaPierre defended his receipt of nearly $300,000 in Italian suits from a Beverly Hills Zegna, which the group’s longtime public relations Ackerman McQueen bought him for television appearances. LaPierre also claimed that he went on Hollywood producer Stanton McKenzie’s 108-foot yacht, the Illusions, after the Sandy Hook shooting for “security” reasons.

Listen to highlights from his first round of testimony on Law&Crime’s podcast “Objections.”

(Screenshot from the New Yorker video)