Lawyer David Fink Maps Out Plan for 'Defanging the Kraken' 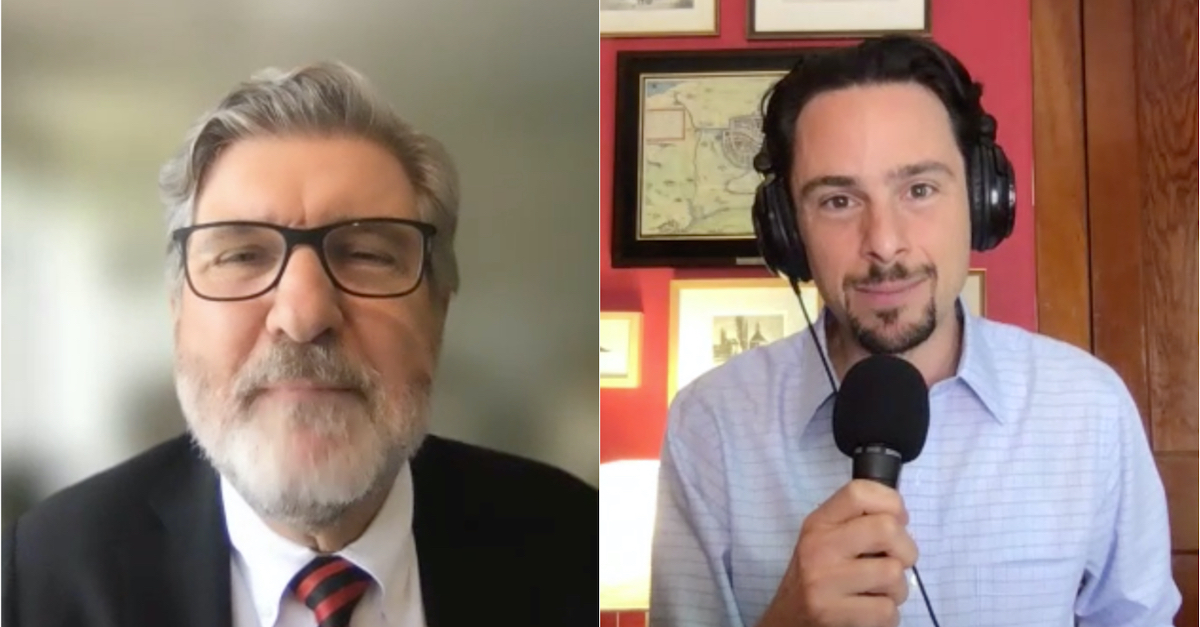 Soundly defeated in four separate courts, the election-attacking legal monster known as the “Kraken” has been morphing into a different beast.

The creation of pro-Trump conspiracy theorists, the Kraken took its name from an octopus-like creature of mythology and inserted its tentacles into federal courts in Arizona, Wisconsin, Georgia and Michigan. The last court is where the Kraken met perhaps its most tenacious adversary: Detroit’s lawyer David Fink, who decided that defeating the lawsuit was not enough.

“Step one was stopping the Kraken,” Fink reflected on the Law&Crime podcast “Objections: with Adam Klasfeld.” “Step two is caging the Kraken.”

In December, Fink became the first attorney to seek heavy sanctions against Sidney Powell, Lin Wood and other lawyers pushing former President Donald Trump’s efforts to overturn the results of the 2020 presidential election. A federal judge in Michigan has been considering Fink’s long-pending request to refer Powell, Wood, and seven other attorneys working with them for disbarment proceedings. He also wants the judge to sanction the nine lawyers with a fine for the money that they raised in support of their election conspiracy theories.

That brought Fink to another phase of his opposition: “Defanging the Kraken.”

“The Cross-Pollination of Extremist Funds”

The Kraken’s fundraising effort has not ended. In late July, the firm behind Arizona’s so-called “forensic audit” disclosed its donors. Powell’s entity Defending the Republic contributed $550,000 to an ongoing effort to try to discredit President Joe Biden’s win in the Grand Canyon State through such bizarre methods as hunting for bamboo fibers in ballots.

“The funding that you’re seeing—the cross pollination of of these extremist funds—is a very scary thing,” Fink noted.

For Fink, the Arizona audit’s funding shows why any penalty for the Kraken team must go behind the simple recovery of attorneys’ fees.

“That’s nowhere near enough sanction because they are profiting from this litigation,” Fink said. “They are marketing this online, and they are collecting enormous amounts. That Sidney Powell’s organization could contribute $550,000 to the insanity that’s going on in Arizona tells you all you need to know about the incredible amount of money that they’ve raised based on the lies that they’re telling.”

Fink also wants them to pay the price with their law licenses.

Detroit notified the Kraken attorneys about their request for Rule 11 sanctions on Jan. 5, one day before the assault of the U.S. Capitol.

“We obviously didn’t know what was going to happen on the 6th,” Fink said. “But in the motion on Jan. 5th, we explicitly raised the specter that this type of litigation […] could interfere with the peaceful transition of power. And of course, that’s exactly what happened.”

Wood denied any connection to the Jan. 6th siege, furiously objecting when Fink invoked it during a recent sanctions hearing. In the interview, Fink said Wood insinuated that he was the one linked to the deadly riot.

“[Wood] flat out suggested that I was a participant in the conspiratorial plotting for what he considers to have been a false flag operation,” Fink said. “Oh, obviously, that’s complete lunacy. Absolute insanity.”

“The Truth is Something That Dictatorships Can’t Tolerate”

For Fink, Trump’s first day in office showed the authoritarian impulses on display with his departure, when the former president insisted that the crowd size was much larger than it was at his inauguration.

“We laughed about it at the time, but it wasn’t funny,” Fink said. “Because it was the message of all dictatorships, which is, what do you believe: the truth, or what we’re telling you?”

Critical as he is about those concocting new theories about the 2020 presidential election, Fink expressed sympathy—and even identified with—those who distrust official authorities.

“Look, I was one of many people who would have been considered conspiracy theorists in the 1960s and 70s, when so many of us doubted the Warren Commission report and doubted that Lee Harvey Oswald acted alone in the assassination of President Kennedy,” Fink said. “I don’t think that was a rejection-of-truth bias. I think that was that we all really, we rejected the unquestioning acceptance of what people in authority tell you. I think that there’s some of that at play here. I think people have a right to question the meaning of—and the the credibility and the integrity of—the people who are telling them the truth. ”

Political polarization also plays a role in what people believe.

Despite his stern words about Trump after Jan. 6th, McConnell voted against convicting the former president on an article of impeachment for inciting an insurrection and blocked a bipartisan inquiry into the assault on the Capitol. Romney and Cheney have become outliers in their party for their intense criticism of Trump, but in Fink’s state of Michigan, the state GOP debunked the former president’s election claims in a bipartisan report.

That development did not surprise Fink, who noted that the Michigan’s GOP has a history of moderation and “some of the best attorneys” in the state. Those were not the attorneys that joined Trump’s election-overturning efforts, Fink said.

“In the state of Michigan alone, we have nine lawsuits, and not one of them involved any of the attorneys that historically represented the Michigan Republican party or Michigan Republican elected officials,” he said, describing that phenomenon as an under-reported fact of the post-election cycle.

Fink called upon their national counterparts to display political courage.

“Where are those Republicans today?” Fink asked. “Where are the people who say, ‘You can’t operate the presidency as a criminal enterprise and get away with it’? Where are they? And where are they saying, ‘Enough already! The election is over, we have to move forward. And it was a fair and honest election.”

On the week of the interview, House Speaker Nancy Pelosi’s Jan. 6th Commission held its debut hearing with only two Republicans on the panel: Cheney and Rep. Adam Kinzinger (R-Ill.). Pelosi refused to seat Minority Leader Kevin McCarthy’s picks, Reps. Jim Banks of Indiana and Jim Jordan of Ohio, both of whom objected to the certification of the election.