‘Time to Hold Every One of Them Accountable’: Detroit Scorches Michigan ‘Kraken’ Lawyers in Final Pitch for Disbarment Referrals 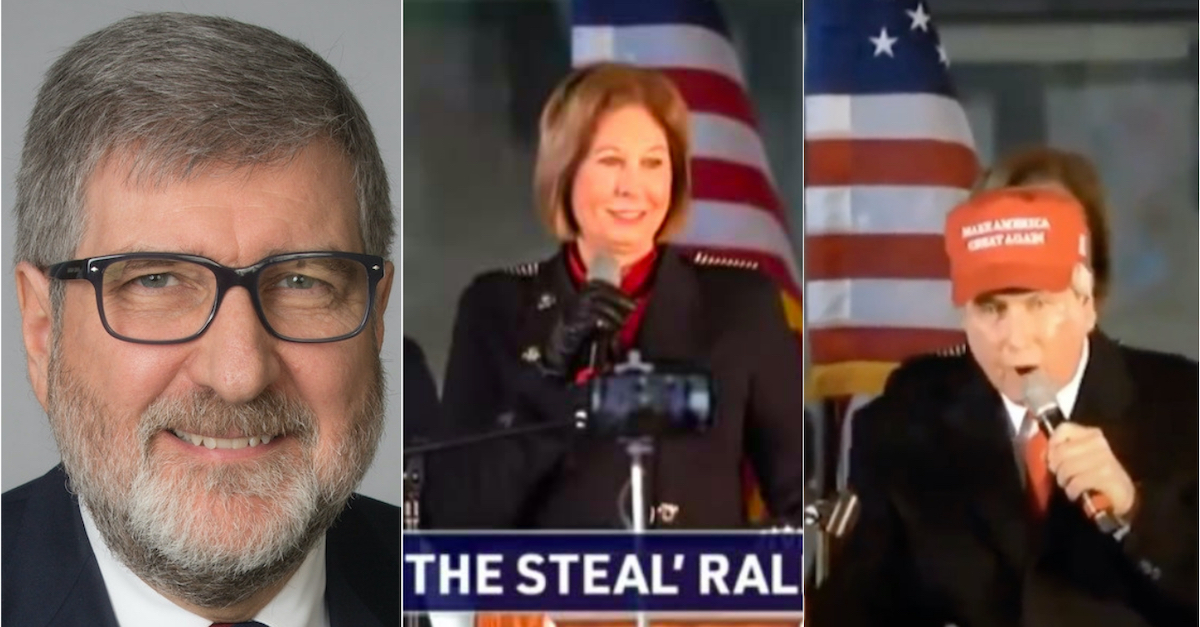 In a blistering final salvo in their request for sanctions, the city of Detroit held back nothing against pro-Trump conspiracy theorist lawyers Sidney Powell, Lin Wood and more than a half dozen other attorneys behind the so-called “Kraken” litigation in Michigan.

“In a shocking abuse of this Court’s processes, nine lawyers used their privileges as members of the bar to spread dangerous lies that undermined the credibility of the 2020 presidential election and threatened to prevent our nation’s peaceful transition of power,” Detroit’s counsel David Fink opened his 20-page supplemental brief by writing. “It is now time to hold every one of them accountable.”

The Kraken is the name that Powell gave to a quartet of failed lawsuits in Arizona, Georgia, Wisconsin and Michigan, seeking to turn ex-President Donald Trump’s defeats into victories by judicial fiat. Each of the nine attorneys whose names appeared on the filings in Michigan now face the possibility of serious sanctions, up to their referral for disbarment proceedings.

Perhaps not coincidentally, some of those lawyers have taken turns distancing themselves from that effort, including one of the most prominent individuals associated with the litigation.

The first lawyer to formally request the disbarment of the propagators of what has been called the “big lie” of election fraud, Fink’s prose and courtroom arguments have been full of fire and indignation. This brief is no exception. Fink describes Wood as “cowardly” for claiming to have played “absolutely no role” in the effort to overturn President Joe Biden’s win in Michigan.

As Fink wryly noted, Wood’s “sudden modesty” about his role in the litigation appears to be an “anomaly.” Wood appeared to relish his role as the face of the Kraken litigation on his now-deactivated Twitter account and his still-active Telegram account, both of which boast hundreds of thousands of followers. The brief says that Wood also conceded his involvement in Michigan litigation before judges in Delaware and New York City.

“Like any bully, when Wood thought he was safe and it might help him, he admitted his involvement in Michigan, but, now that he is personally at risk, he cowardly abandons his comrades and feigns ignorance,” Fink said.

Wood, an embattled high-profile defamation attorney who once represented the family of JonBenét Ramsey and Richard Jewell, also claimed not to have received notice of Detroit’s sanctions motion despite responding to a Law&Crime story about it on Dec. 15.

“At that time, he took personal credit for the litigation, metaphorically thumping his chest with a military analogy claiming ‘you know you are over the target,’ when people like [Mr. Fink] accuse you of misconduct,” the brief states, sharing Wood’s social media post insulting Fink and calling Law&Crime a “propaganda rag.”

The post also shared a link to a Law&Crime article about Fink’s sanctions notice. 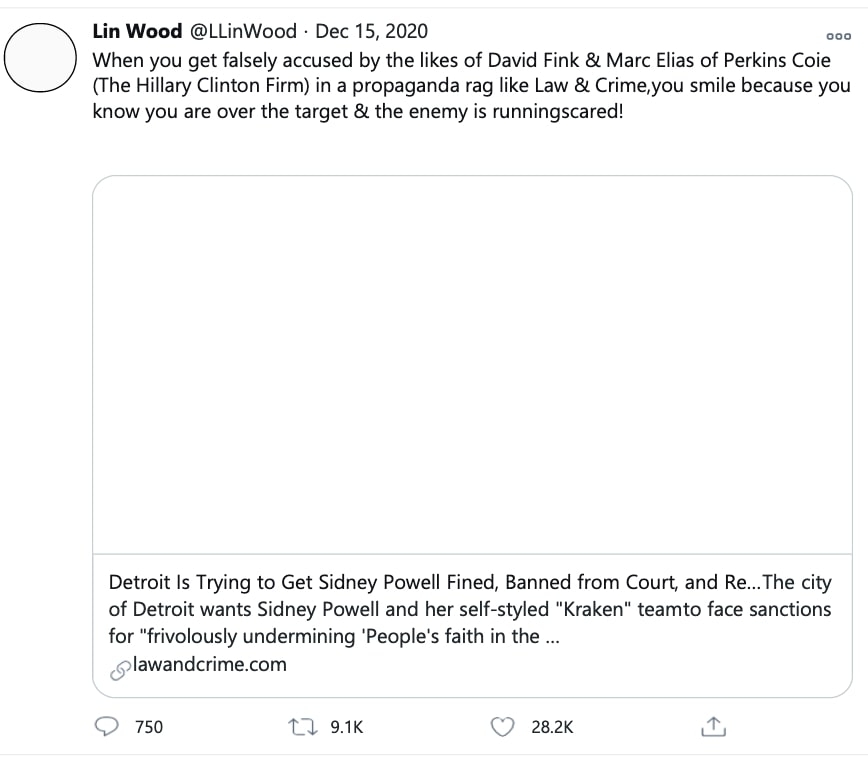 When asked by Law&Crime to explain his shifting statements about the Michigan litigation, Wood offered only more insults on Thursday: “David Fink is a liar and Law and Crime is in the business of publishing lies.”

Wood is not the only one distancing himself from the Michigan “Kraken.” Powell claimed she never signed documents that bear her electronic signature. Wood also claimed not to have signed documents. Emily Newman, an ex-U.S. Agency for Global Media staffer under the Trump administration, noted she spent some five hours on the lawsuit. Other attorneys who did file appearances said that Wood and Powell “spearheaded” the litigation, Fink says.

For Detroit, this is all an elaborate exercise of misdirection.

“All nine of these lawyers have one thing in common—they knew that their names were on the signature blocks and not one of them asked to be removed,” Fink wrote. “They allowed their names and reputations as attorneys to be used to endorse this mendacious litigation, and now they should answer for the harm they caused.”

During a six-hour hearing earlier this month, U.S. District Judge Linda Parker systematically grilled the lawyers who brought the lawsuit to overturn the Michigan election about what investigation, if any, they performed on the evidence they submitted to the court.

The judge pressed the lawyers on an affidavit submitted previously had been ruled double-hearsay by another Michigan court. She refused to grant anonymity to two supposed military and intelligence “experts”—one code-named “Spyder”—whom the Washington Post reported had inflated their credentials and submitted misleading court declarations.

Detroit’s brief enumerates the basic facts about Michigan elections that the “Kraken” team got wrong.

“This is not a case of subtle misunderstandings,” the brief states. “Reasonable minds cannot differ about whether Michigan has party registration, whether Michigan voters can vote absentee without using the mail, whether the Antrim County tabulation error was discovered by a hand recount, whether there was a 139% turnout in Detroit, whether ‘Spyder’ is a military intelligence expert, or whether it was evidence of fraud that Joe Biden received a greater share of the absentee ballot vote than Donald Trump.”

In defending their litigation, the “Kraken” team adopted the slogan: “Fraud vitiates everything,” a phrase the lawyers supposedly traced to an obscure 1878 Supreme Court case United States v. Throckmorton. Attorney Howard Kleinhendler cited the phrase twice during the sanctions hearing in early July.

Digging into the footnote, however, Detroit discovered the 19th century precedent created the precisely opposite holding, finding that a land grant could not be collaterally attacked on the basis that the judgment was procured through fraud.

“No diligent attorney could reasonably believe that the internet mantra that ‘fraud vitiates everything’ means that Michigan’s election laws and legal precedent can be ignored,” Fink wrote, finding that the phrase traces its origins in “internet memes rather than rigorous legal analysis.”

The citation appears to derive less from case law than Twitter.

This tweet with a dodgy Supreme Court citation is cited by Detroit as an example of the internet memes relied upon by the “Kraken” team.

“Throckmorton and the phrase ‘fraud vitiates everything’ have become a meme on extremist social media accounts, where it is repeatedly parroted as a basis for overturning the 2020 election,” Detroit’s brief states, sharing examples of those accounts in exhibits. 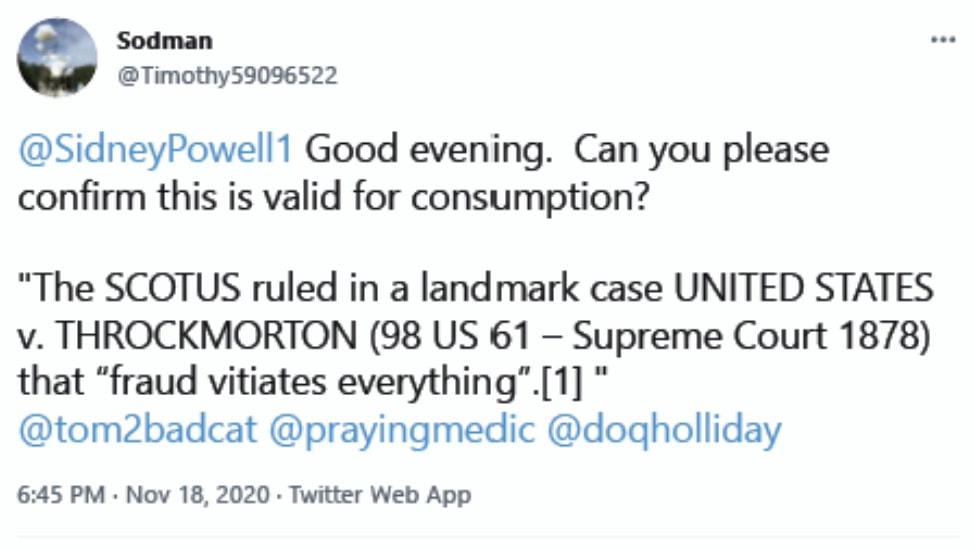 This tweet with a dodgy Supreme Court citation is cited by Detroit as an example of the internet memes relied upon by the “Kraken” team.

For Fink, the 143-year-old Throckmorton citation—illustrating the opposite proposition the lawyers seemingly intended—is emblematic of the broader “Kraken” endeavor.

“That Throckmorton has made the leap from uninformed social media commentary to citation by Plaintiffs’ counsel as the legal basis for this far-reaching and unfounded lawsuit demonstrates that this suit has been driven by partisan political posturing, entirely disconnected from the law,” his brief states. “This lawsuit is the dangerous product of an online feedback loop, with these attorneys citing ‘legal precedent’ derived not from a serious analysis of case law, but from the rantings of conspiracy theorists sharing amateur analysis and legal fantasy in their social media echo chamber.”

Detroit argues that the lawyers have been testing a say-anything approach to federal judicial arguments.

“In the end, Plaintiffs’ lawyers defend their presentation of false claims and their reliance on non-existent legal precedent with the argument that all of this ‘appears consistent with the narrative,'” its brief states.

“In other words, it’s ok to say anything in court, if it fits their storyline,” it continues, urging Parker to show them otherwise.

“Plaintiffs ask this court to ignore the orderly statutory scheme established to challenge elections and to ignore the will of millions of voters,” Parker wrote late last year. “This, the Court cannot, and will not, do.”

The “Kraken” team may be bracing for the possibility that Parker will deal them another defeat.

Fink quoted Wood writing off Parker on his Telegram account as an “Obama appointee.”

“I think that pretty much says it all, don’t you,” Wood wrote, speaking of Parker’s path to the federal bench.

Fink ended his brief by asking Judge Parker to impose the “full measure of sanctions” available, from fines to referral for disbarment proceedings.

“There are no words to describe how detached these lawyers are from the basic rules of professional responsibility, civility and ethical legal representation,” he wrote. “They must not be given the opportunity to further abuse our judicial system and to undermine our democracy.”

(Image: Finks’s headshot and YouTube screengrabs of Wood and Powell)