‘It’s Kill or Be Killed’: Federal Prosecutors Share Messages from Oath Keepers Jan. 6 Defendant Who Claims to Be Little More Than Elderly Bystander 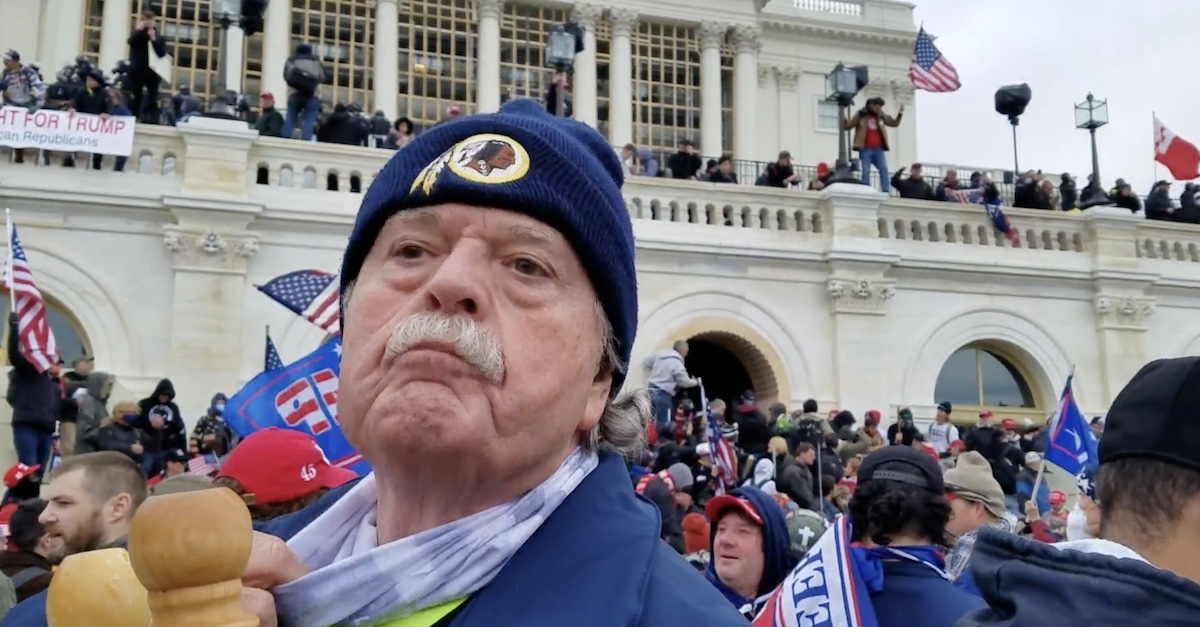 Federal prosecutors in the Jan. 6 seditious conspiracy case against members of the Oath Keepers militia group zeroed in on the role of one defendant in particular on Friday — a Navy veteran whose lawyer has insisted is nothing more than a feeble veteran who is being unfairly targeted by the government.

Thomas Caldwell, charged alongside Kelly Meggs, Jessica Watkins, Kenneth Harrelson, and Oath Keepers founder Stewart Rhodes, is alleged to have taken a lead role in the group’s “Quick Reaction Force,” or QRF — a cache of weapons stored in a hotel in Arlington, Virginia, as Donald Trump supporters raged at the U.S. Capitol building and violently forced a temporary halt to the certification of Joe Biden‘s electoral win.

The defendants are charged with seditious conspiracy, obstruction of an official proceeding of Congress, and other crimes in connection with the Capitol attack. Lawyers for the defendants have insisted that the QRF was set up strictly for defensive purposes, while prosecutors have argued that it was intended to be used against those who didn’t take action to keep Trump in office.

Prosecutors say Caldwell organized and led the effort to set up the QRF, but during opening statements, Caldwell’s lawyer David Fischer said that the government’s prosecution of his client is nothing more than a “bait and switch” and an “absolute outrage.” He has described Caldwell as an “elderly veteran” who “couldn’t storm his way out of a paper bag,” a man whose primary concern about Jan. 6 was where to find the porta-potties.

On Friday, the government presented evidence it hoped would indicate otherwise to the jury, including numerous messages from Caldwell suggesting an intense desire to keep Trump in office, a readiness to engage in violence in order to do so, and a dogged effort to acquire at least one boat to ferry weapons from the QRF over the Potomac River to the Capitol on Jan. 6.

“If We Don’t Start Mowing Down Masses of These Shitballs They Will Come for All of Us. It’s Kill or Be Killed.”

FBI agent Sylvia Hilgeman, who has been with the bureau for 13 years, was tasked with investigating the QRF, although she also has another connection to the Capitol riot: she and some of her colleagues, who were working in Virginia that day, were called to the Capitol to support the police at around 2:00 or 3:00 p.m. At the start of her testimony, she told prosecutor Louis Manzo that they assisted police in clearing the Capitol grounds, largely by standing behind Metropolitan Police and U.S. Capitol Police.

“Were you the only CPA trying to clear the crowds that day?” Manzo asked of Hilgeman, who has a background investigating financial crimes. Through mild laughter, Hilgeman said that she believed at least one other agent on the scene that day had that certification.

A significant part of Hilgeman’s testimony on Friday was spent showing jurors messages from Caldwell dating back to the days after the 2020 presidential election — messages that appeared to show that Caldwell was angry and ready for a fight.

“Sharon and I are going to this rally tomorrow for the President,” Caldwell wrote in a Facebook message to someone named Adrian Grimes. “It’s a show of support. If we lose him from the White House our country is dead.”

“They are asking that folks Trump Train it over there with flags flying,” Caldwell also said. “This may be the last hurrah. Or a final push to let people know we are not going down easily.”

“Next step, I guess, if the Democraps throw out the Constitution, is Civil War,” Caldwell added.

“If we cannot get the President another term, we are well and truly fucked,” he wrote on Nov. 14, 2020, the same day that he attended a pro-Trump “Million MAGA March” in Washington. “If we don’t start mowing down masses of these shitballs they will come for all of us. It’s kill or be killed I am afraid.”

“I don’t want to live in a communist country,” Caldwell also said. “I kinda hope there is some shit tomorrow in some ways just so we can get ON with it.”

On Nov. 16, 2020, Caldwell messaged people identified in the exhibits only as “J. Godbold, D. Godbold” about having marched in D.C.: “We could have burned the congress to the ground if we had wanted to.”

By early December, according to prosecutors, Caldwell had begun to form a plan.

“Ranger made me think, though he didn’t say it in so many words, that maybe I should be planning a MUCH bigger op, for like when we have to roll into town to actually save the Republic,” Caldwell wrote in a Signal message to Paul Stamey, a North Carolina member of the Oath Keepers. “Ranger” is a reference to North Carolina Oath Keepers leader Doug Smith.

On Dec. 20, 2020, Caldwell posted a comment in response to a Facebook post by someone named Diann Tombling, who in turn had linked to a YouTube video. Caldwell’s message indicated an alleged eagerness to use firearms against those who opposed keeping Trump in office.

“Yeah but are we supposed to do?” Caldwell wrote. “Tell me who to shoot first and I’m all in!”

Days later, Caldwell appeared to have firm plans to be in the nation’s capital in a few weeks.

“I will be at the march on the 6th,” Caldwell wrote Smith in a message. “I have booked a hotel room in Arlington,” he added in a possible reference to the Comfort Inn in Arlington where the QRF was staged.

By the end of December, Caldwell was reaching out to other militia groups in an alleged attempt to coordinate.

“Are you and any of your fellow 3-percenters having any kind of meetings coming up to discuss the 6th of Jan in d.c. or just getting together?” Caldwell messaged someone identified in the exhibit as “TREES Shaw Pugh” on Dec. 29, 2020. “I would like to meet some of the guys if you think I’m cool enough. :)”

Caldwell appeared to hint at a larger plan in a message to Smith on Jan. 1, 2021.

“I WILL see you in DC,” Caldwell wrote. “I am coordinating with Paul and I think he’s got a solid plan[.]”

In a series of Facebook exchanges with someone identified as John McGraw, Caldwell didn’t hide the fact that he thought something big was going to happen.

“It begins for real Jan 5 and 6 on Washington D.C. when we mobilize in the streets,” Caldwell wrote on Dec. 31, 2020. “Let them try to certify some crud on capitol hill with a million or more patriots in the streets. This kettle is set to boil[.]”

Records also showed that Caldwell participated in at least three GoToMeeting calls before Jan. 6, one each on the first, second, and third days of the month. Notable Oath Keepers leaders and associates were also on those calls, including co-defendants Meggs, Harrelson, and David Moerschel; co-defendant Joshua James, who has been cooperating with prosecutors since pleading guilty in March; operations leader Don Siekerman, who has not been charged; Caleb Berry and Jason Dolan, both Oath Keepers members who have pleaded guilty; and Terry Cummings, who testified for the government — perhaps somewhat unenthusiastically — earlier this week.

Jurors also saw a calendar page for the month of January 2021 seized from Caldwell’s home pursuant to a search warrant that same month.

“April 2 is drop dead for burner[,]” a handwritten note at the top of the page said. Other notations appeared to indicate phone numbers, SIM card numbers, email addresses, and one particularly memorable password: “fuckyousocialistfucks2021!”

As Jan. 6 drew nearer, messages between Rhodes and Meggs showed that the QRF had taken shape.

Jurors also saw a record of an “unsent” message from Caldwell to someone named Matt Combs on Jan. 14, 2021. The original message was sent on Jan. 2, 2021, and while that message was no longer available, Combs’ response to it was.

“Damn I wish I did lol,” Combs wrote. “I’d be your captain for sure. And off the top of my head I can’t think of anyone with a boat[.]”

On Jan. 2, 2021, Caldwell also sent a message to someone listed as “Shawn Pugh,” a member of the Three Percenters militia group, asking for a boat or boats to use on the Potomac. Caldwell said he would be in the boat pretending to fish.

Caldwell appears to have sent a third message on Jan. 2, 2021 in an effort to procure at least one boat, messaging someone named “Matthew Truong” with a “burning question”: does he know anyone, or can he find anyone who knows anyone, who has “a boat we could have on the Potomac on the 6th[.]”

“Here’s why: we are not going in with guns but we have designated a QRF loaded with such things,” Caldwell wrote in the message. “[I]f things went really bad and we needed to fight back to save lives the QRF vehicle will have a hard time fighting through traffic to get to our guys.”

Caldwell said that having access to boats was a better option, and “respectfully” asked Truong to “put out the call,” adding that he would compensate anyone who can provide a boat, “no problem.”

“CAG is on the case,” Caldwell wrote, a reference to the Navy veteran’s own nickname.

“We will have several well equipped QRFs outside DC and there are many, many others, from other groups, who will be watching and waiting on the outside in case of worst case scenarios,” Rhodes said.