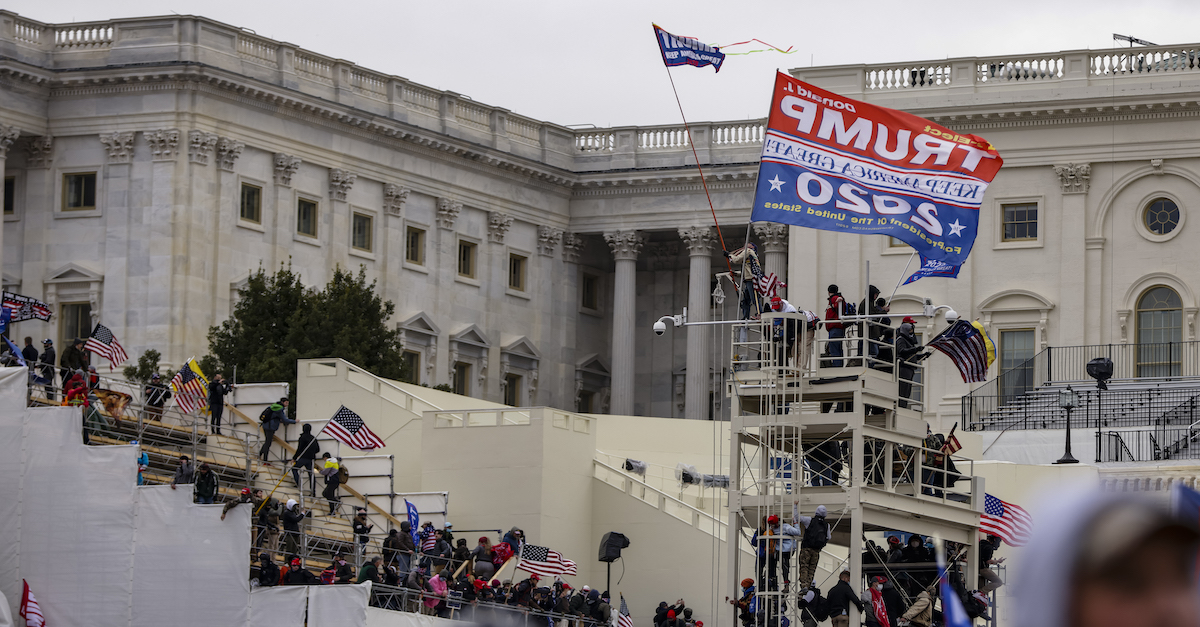 Pro-Trump supporters storm the US Capitol following a rally with President Donald Trump on January 6, 2021 in Washington, DC. Trump supporters gathered in the nation’s capital today to protest the ratification of President-elect Joe Biden’s Electoral College victory over President Trump in the 2020 election.

A Florida- and Oregon-based man who traveled to Washington D.C. with members of the Oath Keepers — but didn’t enter the U.S. Capitol with them, perhaps due to an unintentionally well-timed bathroom break — testified for the government that he didn’t directly hear leaders of the group discuss a specific plan to breach the building, although he acknowledged that such conversations could have occurred.

In testimony that spanned the late morning and early afternoon hours on Wednesday, Terry Cummings, 66, said that he joined the Oath Keepers in 2020 over concerns about “a lot of things going on in the country,” such as “attacks from Antifa” in his home state of Oregon and a belief in what he felt “the Oath Keepers stood for.”

As a member, he told prosecutor Louis Manzo that he joined some of the Signal chat groups that Oath Keepers regularly used to communicate, although he wasn’t part of any leadership chat. Nonetheless, he managed to meet Kenneth Harrelson while in Florida, and decided to join the group on a VIP “security detail” in Washington D.C. on Jan. 6.

Harrelson is charged with seditious conspiracy and other crimes in connection with the Jan. 6 siege, when scores of Donald Trump supporters, angry over their chosen candidate’s electoral loss to Joe Biden, overwhelmed police and swarmed the Capitol building, forcing a temporary halt to Congress’ certification of the electoral vote. He and co-defendants Jessica Watkins, Kelly Meggs, Thomas Caldwell, and Oath Keepers founder Stewart Rhodes are accused of plotting to use force to keep Trump in office; four other co-defendants are set to go to trial in November.

Cummings wasn’t a part of Oath Keepers leadership, but he joined some Signal chat groups for members. He became more active with the group in Florida, where he and his wife spent winters, because it was more ideologically “conducive” to the Oath Keepers than Oregon.

Cummings: Left Behind on a Bathroom Break as Oath Keepers Entered the Capitol

When he decided to join the Oath Keepers in Washington on Jan. 6, he said it was a good opportunity exercise his First Amendment rights and see a “sitting president” give a speech. He opted to drive up with Harrelson and Jason Dolan, who is charged in a separate Jan. 6 case.

Cummings also brought his own firearm: an AR-15 and an orange box of ammunition that he showed to the jury on Wednesday. The 21-year veteran of the Air National Guard testified that he left the rifle in Northern Virginia with the so-called “Quick Reaction Force,” or QRF, that was staged at the Comfort Inn in Balston, intending to use it of the QRF was activated. He said he didn’t plan on using the weapon, but knew that having it could support a “show of force” and a “presence” by the Oath Keepers that day.

In testimony, Cummings said that when he dropped his rifle off at the hotel on Jan. 5, he noted that he hadn’t seen that much firepower amassed in one place since serving in the military.

Cummings testified that on Jan. 6, he found himself in a “VIP area,” having been brought there in transportation arranged by Meggs. He told Manzo that before Trump had finished his speech at the so-called “Stop the Steal” rally, Meggs told the “security detail” that it was time to escort the VIP to her destination. Cummings could not remember who the “VIP” was, describing her as an “Hispanic female.”

Cummings recalled that as his group headed toward the Capitol, Meggs said “they” had “breached” the building. Cummings said that although the word “breached” has a “negative connotation” for him — it felt like “breaking in” — and he wasn’t sure who Meggs meant by “they,” he stayed with the group and continued toward the Capitol grounds, at some point separating from the “protectee” they were purportedly guarding.

In response to a question from Manzo about whether Cummings heard any talk amongst the Oath Keepers members about helping police, the witness said he couldn’t recall any. Cummings said there was a “general attitude” of helping people “in need,” but he heard nothing specific.

He was ultimately separated from his fellow Oath Keepers members when he took a much-needed bathroom break: when he returned from the “porta potties,” Meggs and the others weren’t there. Cummings said that he stayed outside of the Capitol at that point, observing what was happening until he reunited with Meggs and the others around 45 minutes later, after seeing them emerge from the building.

Cummings said he then went back to the hotel and slept through the night, meeting up with Harrelson and Dolan in the morning for the drive back to Florida, which Cummings described as more “subdued” as the ride to the capital.

At some point after Jan. 6, Cummings noticed that he had been removed from several Oath Keepers Signal groups, but he had not removed himself.

It appears that Cummings did not sever ties following the Jan. 6 riots: he testified that after Harrelson and Meggs were arrested, he donated support to related efforts on the right-wing GiveSendGo crowdfunding website.

Toward the end of questioning, Manzo — in an apparent attempt at transparency — asked Cummings if he had been “promised anything” in exchange for his testimony, or threatened in any way related to testifying. Cummings said no to both.

“Why are you testifying here today?” Manzo asked the witness.

“I received a subpoena and was told I had to be here,” Cummings replied.

Rhodes Lawyer: “All of These Oath Keepers Were With You When the Siege of the Capitol Already Started.”

On cross-examination, Cummings appeared to indicate an ongoing loyalty to the Oath Keepers group, eagerly taking up the opportunity offered by Rhodes attorney Phillip Lee Bright to explain why he joined the Oath Keepers when he did — specifically, after the summer of 2020, when the murder of George Floyd in police custody sparked nationwide protests calling for racial justice.

For Cummings, that amounted to attacks by “Antifa” and “BLM,” especially in his home state of Oregon. At one point, Cummings said, somebody has to “stand up” to those attacks.

Bright keyed in on the moment Cummings said he heard Meggs say that the Capitol had been breached, which Cummings said occurred within moments after the “security detail” had left the rally with the VIP.

“Did you all start running”? Bright asked.

“Did you all start walking really fast to get there?” Bright asked.

“No, but we were already moving quickly,” Cummings said.

“So nothing really changed,” Bright said, adding that “all of these Oath Keepers were with you when the siege of the Capitol already started.”

Bright asked if, “at any point” during the ride with Harrelson and Dolan from Florida to Washington, including the night they spent camping in North Carolina on Jan. 4, did Cummings hear “of any human being associated” with the Oath Keepers discuss “a plan of any sort for the activities that you witnessed on Jan. 6.”

“You didn’t hear any communications from anyone ordering the people who did to go into the Capitol?” Bright asked.

“You didn’t hear of any preexisting orders to do so, correct?” Bright pressed.

Cummings faced a similar series of questions from Harrelson’s attorney Brad Geyer, who asked the witness if, during his time with the Oath Keepers in Washington, he had ever heard anyone mention the word “insurrection,” discuss attacking police, or attacking the Capitol.

“Nope,” Cummings replied to each question in turn.

When Watkins’ attorney Jonathan Crisp took the podium to question Cummings, he focused on what Cummings did — and did not — hear regarding the QRF. Cummings said that he was not told to get his weapon or that the QRF was activated. He also said that, as far as he was aware, the weapons would only be used defensively — a key part of the defense theory that the QRF was not an “offensive” force aimed at attacking the Capitol.

Crisp also asked Cummings whether he believed he was in D.C. to help people if they needed it on Jan. 6. Cummings said that is what he indeed believed.

Trial is set to resume on Thursday morning.