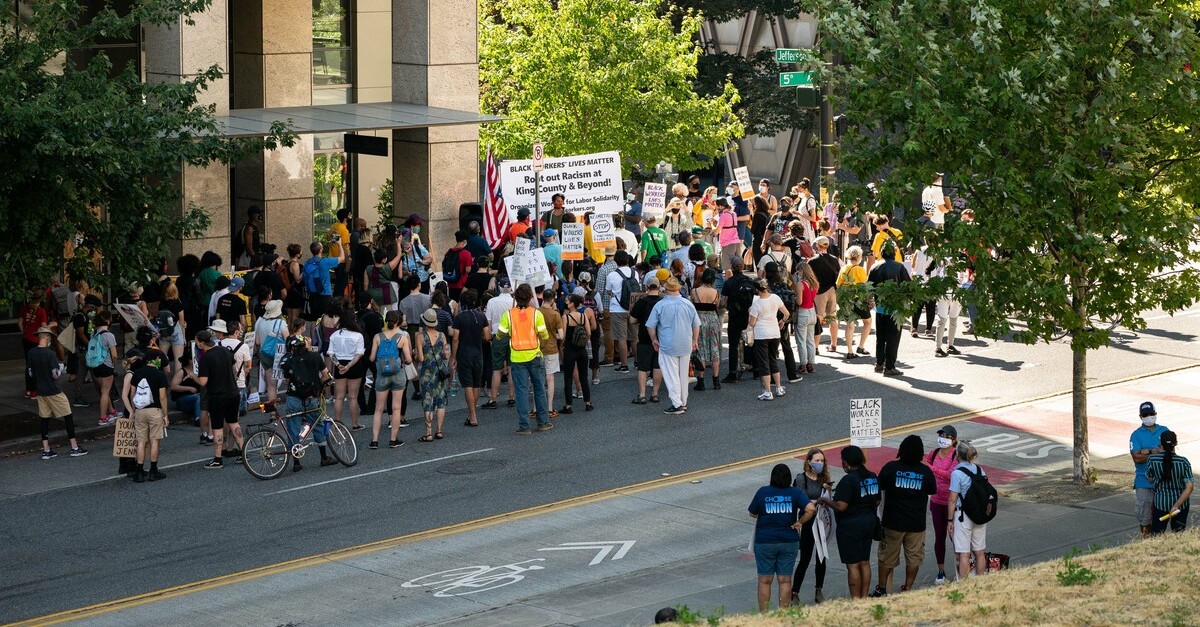 SEATTLE, WA – JULY 20: Demonstrators gather to listen to speeches during a picket and rally event outside the office of King County Executive Dow Constantine as part of the nationwide Strike For Black Lives on July 20, 2020 in Seattle, Washington. Organized by racial justice groups in partnership with labor unions, the nationwide events included at least two rallies in the Seattle area.

A King County, Wash. Judge on Thursday ruled that five Seattle news outlets had to comply with a subpoena demanding them to provide the Seattle Police Department (SPD) with unpublished pictures and video from a May 30 protest against police brutality and racial injustice, the Seattle Times reported Thursday. The Times was one of the outlets subject to the order, along with television stations KIRO 7, KING 5, KOMO 4 and KCPQ 13.

During the May 30 demonstration, a group of protesters broke off from the crowd and began breaking windows, looting, and setting fires, much of which was captured by local news organizations documenting the event. Many of those responsible for perpetrating the criminal acts were able to avoid authorities, leading police to subpoena all of the images and videos taken by journalist during a 90-minute span in a four-block radius. The news outlets challenged the demand in court.

Following a morning hearing on the matter, Superior Court Judge Nelson Lee ruled that the SPD’s subpoena against was enforceable, reasoning that the content sought was critical in the department’s ongoing investigation into the alleged theft of police firearms and the burning of several SPD vehicles.

According to the report, the stolen guns included a Glock 43 semi-automatic pistol and a Colt M4 carbine rifle with a suppressor, both of which were loaded. Police also said that at least five of the department’s vehicles were burned by arsonists using an accelerant.

Under Judge Lee’s order, SPD is only permitted to use the subpoenaed evidence in the arson and firearm thefts, which means that regardless of what evidence the photos and videos reveal, SPD cannot use the material to investigate any other lesser crimes.

Despite the relatively narrow scope of the ruling, Seattle Times Executive Editor Michele Matassa Flores said it endangers the independence and safety of the paper’s employees.

“The media exist in large part to hold governments, including law enforcement agencies, accountable to the public,” said Matassa Flores. “We don’t work in concert with government, and it’s important to our credibility and effectiveness to retain our independence from those we cover.”

The Times said that the media companies have not yet decided whether they will appeal Judge Lee’s decision.

Editor’s note: the headline for this story has been corrected. A previous version referred to “Portland” instead of “Seattle.”