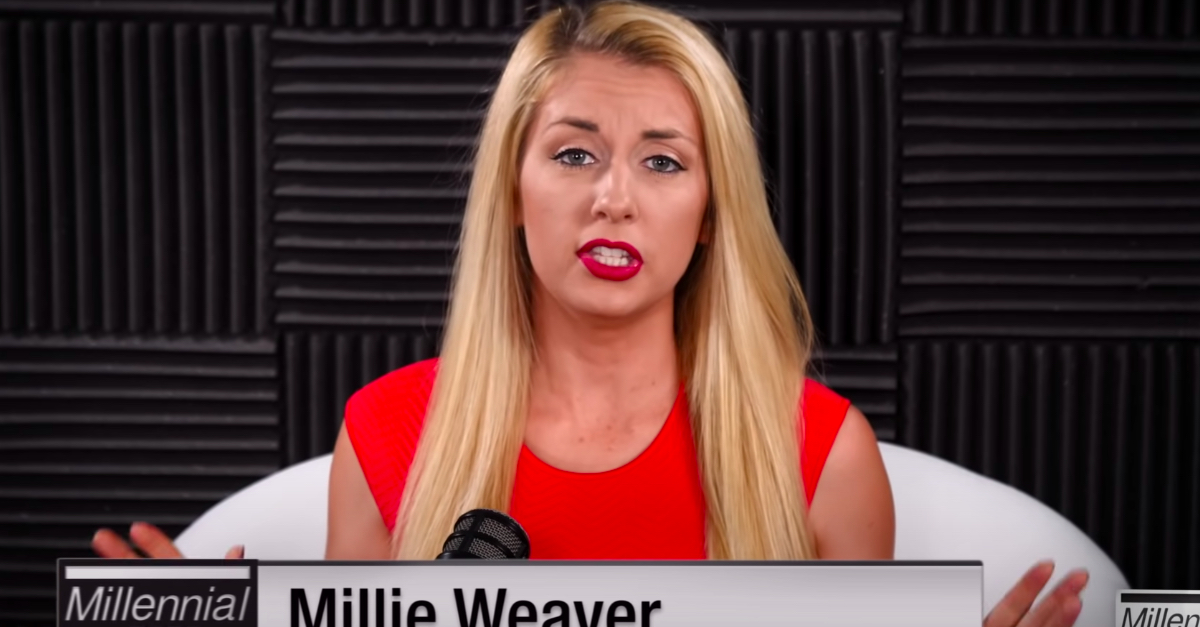 A correspondent for InfoWars, the Alex Jones-helmed far-right media organization known as a hub for conspiracy theories and false news stories, was arrested Friday evening at her home in Diamond, Ohio, midway between Youngstown and Akron. Millicent “Millie” Weaver, 29, and her husband Gavin Wince, 46, were taken into custody by the Portage County Sheriff’s Office. Each faces one count each of robbery, tampering with evidence, obstructing justice, and domestic violence, according to jail officials cited by Daily Dot.  (Publicly available online jail records reviewed by Law&Crime do not contain precise charges for Weaver and Wince.  Wince was booked at 1:51 a.m. Friday; Weaver was booked at 1:55 a.m., the records indicate.)

Weaver recorded video of her arrest, which she uploaded Friday. During the video, she implied that she was being detained because of “huge breaking news” that she was about to reveal.

“Guys, I don’t know what’s happening right now. The police have just shown up at my house and they said that they’re arresting me. They said that a grand jury indicted me for something. I have no idea what. This is crazy,” she says, addressing the camera directly.

“I’m literally about to break huge breaking news right now, and I’m being arrested, and I have no idea why.”

A few days prior to her arrest, Weaver — who consistently traffics in misleading or false information — uploaded a video asserting that a “small group of government contractors were hired by government officials to frame the Trump campaign and set him up for the Russia collusion investigation.” (For what it’s worth, Jones had previously claimed that Weaver was in possession of secret Hillary Clinton emails and could prove that former President Barack Obama personally controls the U.S. media.)

Weaver’s arrest immediately spawned a slew of conspiracy theories surrounding the circumstances of her detainment, with several right-wing media personalities claiming the government was trying to prevent her from going public with an upcoming “documentary.”  However, an official at the Portage County Jail told Wonkette that Weaver’s arrest had “nothing to do with ‘government papers,’ or with exposing the deep state, or with Hillary Clinton’s emails.”

Weaver and her husband are both being held without bond until Monday when they will appear before Judge Rebecca Dohert.