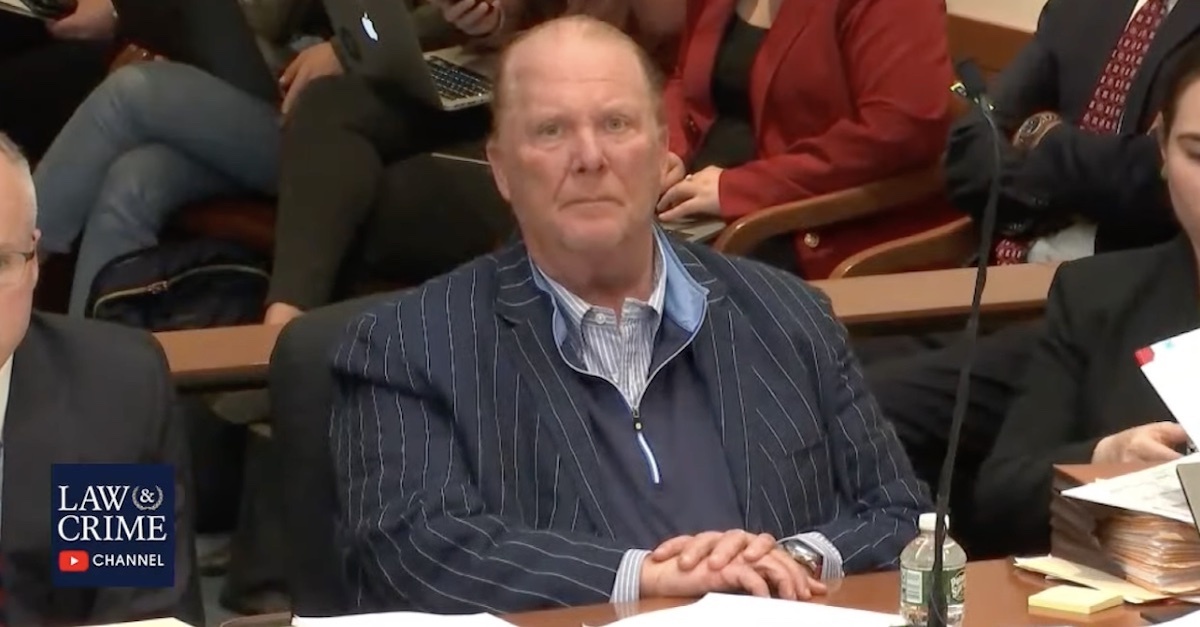 Celebrity chef Mario Batali’s accuser sent text messages to her friend laughing at the possibility of selling photographs of the alleged groping incident to a tabloid and making a “chunk of change” from a settlement on civil litigation, a court heard on Tuesday.

The text exchanges surfaced during the testimony by Rachael Buckley, a friend and confidant of Batali’s alleged victim Natali Tene.

Buckley, who was the prosecution’s second and final witness, claimed that Tene confided in her that Batali groped her groin and thigh in 2017. She took the witness stand one day after Tene delivered a similar account to Judge James Stanton, who is hearing the case without a jury.

“His right hand is all over my breasts, all over my rear end, all between my legs,” Tene reportedly said of Batali. “I’ve never been grabbed like that before . . . squeezing my vagina and pulling me closer to him. As if that’s a normal way to pull someone in.”

Tene said that the alleged incident occurred during an impromptu selfie session five years ago, but a day later, Buckley referred to their time at the restaurant in a text message as a “fabulous night out.”

Over time, Tene opened up to Buckley, who acknowledged that she could not remember where the original conversation about it happened.

“I thought that it was in my living room, but apparently, it was at Winter Hill Brewery,” Buckley said, referring to a taproom in Somerville, Mass.

Buckley’s memory about other details about the alleged assault also evolved over time.

In a 2019 deposition, Buckley said that she could not recall where Batali allegedly groped her friend. She added that while she did not have a specific memory of where at the time, she believed the implication was obvious.

“LMFAO, I want to sell these photos, dude,” Tene allegedly wrote on Dec. 11, 2017, using the internet slang shorthand for “laughing my f***ing ass off.”

“This is now nine months after she allegedly told you about her quote-unquote ‘assault,’ right?” Caruso asked Buckley.

On redirect, the prosecutor played down this exchange.

“To your knowledge Ms. Buckley, did Ms. Tene ever sell any of those photos?” the prosecutor asked.

Caruso contrasted Buckley’s description of the alleged incident as “serious and somber” with the texts.

“It’s up to the person how long it takes to process something,” Buckley replied.

In June 2018, the friends had an exchange about Tene’s meeting with her lawyer.

“Dude realness: Lawsuit being filed in the next 10 days,” Tene wrote.

Caruso said that the conversation quickly turned to the case’s outcome.

“Dude, at least you might get a chunk of change and a settlement?” Buckley asked.

Buckley suggested that the levity of the messages were not characteristic of what she observed from her friend.

“For lack of a better way to put it, she was grossed out,” Buckley testified.

Asked by the prosecutor whether Tene had been trying to “laugh off” the incident, Buckley replied: “I would say so, yes.”

In 2017, the former Food Network star admitted that he “mistreated and hurt” women who had accused him of misconduct over a 20-year period.

“I apologize to the people I have mistreated and hurt,” Batali wrote in a statement, followed by a cinnamon roll recipe. “Although the identities of most of the individuals mentioned in these stories have not been revealed to me, much of the behavior described does, in fact, match up with ways I have acted. That behavior was wrong and there are no excuses.”

The prosecution’s case rested after Buckley’s testimony, followed shortly after by closing arguments, where Batali’s defense counsel referred to Tene as a “proven and admitted liar.”