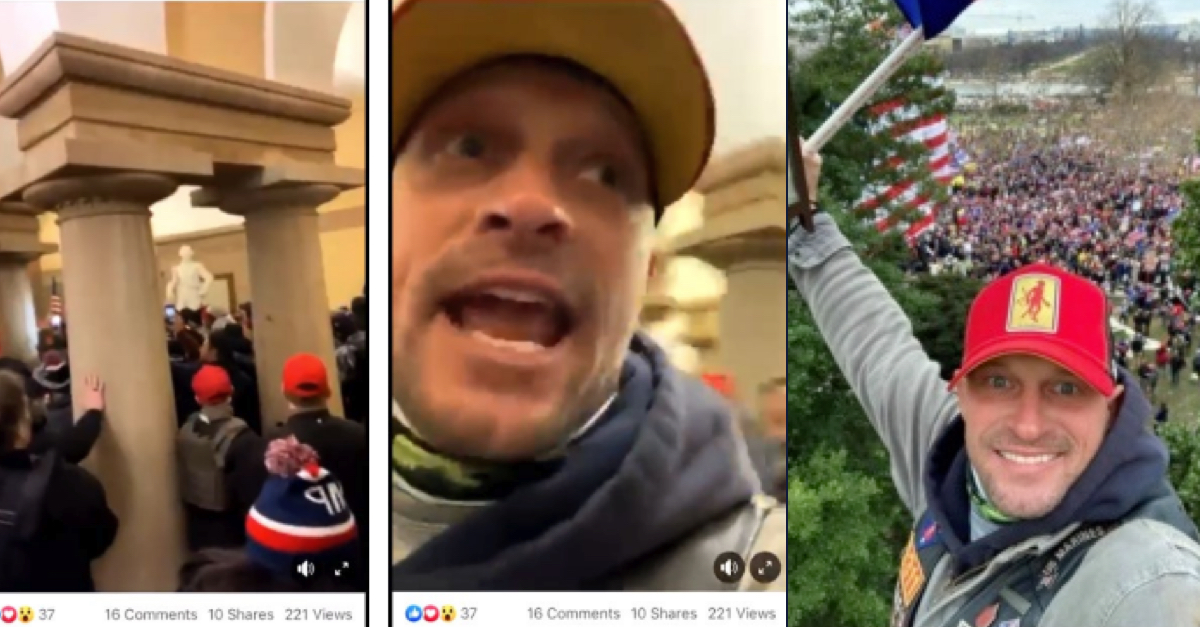 A former Florida cop and military veteran who spent almost an hour inside the U.S. Capitol on Jan. 6 has been sentenced to probation and home detention.

Nicholes Lentz, 42, was one of the first people to enter the Capitol on Jan. 6. He went into the Rotunda, the Crypt, and the Capitol Visitors Center before leaving through the Senate Wing Door. He stayed inside for almost an hour, a relatively long time compared to most of the nearly 800 people charged in the government’s expansive prosecution of participants in the Jan. 6 attack.

Prosecutors say Lentz’s social media posts reflect his pride at having joined the mob of Donald Trump supporters that ultimately overran police and swarmed the building.

“There’s no way they can hold us back,” Lentz added.

Lentz pleaded guilty in February to one count of entering or remaining in a restricted building or grounds. The misdemeanor charge carried a potential one-year jail sentence and a fine up to $100,000.

On Tuesday, U.S. District Judge Randolph Moss sentenced Lentz to three years of probation, including 30 days of home detention. He will also have to perform 100 hours of community service within six months.

Notably, Lentz had the opportunity to plead to a lower-level disorderly conduct misdemeanor with a shorter potential jail sentence, but opted for the crime that he felt more accurately described his actions.

“Disorderly conduct to me is worse than trespassing,” Lentz told Moss. “Trespassing [means] I was somewhere I wasn’t supposed to be, [but] I didn’t damage anything … Disorderly conduct means you actually did some sort of inappropriate act to a police office or elder.”

Lentz said that he would prefer to have a record that reflected his actions, even if it meant a longer sentence.

“If that carries more of a charge that’s fine,” Lentz said of his guilty plea. “I’m not going to change it because that’s my moral outlook. I’d much rather be guilty of trespassing than disrespecting someone.”

Assistant U.S. Attorney Erik Kenerson said that it was to Lentz’s credit that he made the choice “that was consistent with his morals even though it subjected him to a higher penalty.”

When he issued his sentence, Moss implied that Lentz might not have fully grasped the seriousness of having breached the Capitol building.

“This was more than trespassing,” Moss said, adding Lentz’s decision to enter the Capitol building “was ultimately in aid of interfering with the democratic process”—specifically by temporarily stopping Congress from certifying Joe Biden’s 2020 electoral win, which he called one of Congress’ “most sacred constitutional duties.”

Moss cited Lentz’s extensive record of military service, and said that he more than others should understand why the events of Jan. 6 are so significant.

“Mr. Lentz has served this country in various roles that demand our respect,” Moss said. “Perhaps Mr. Lentz, in retrospect, appreciates this more than anyone, as somebody who has put his life on his line for this country. He wasn’t putting his life on the line for any particular candidate[.]”

At the hearing, Lentz said that he spent 17 years in the Marine Corps, and was deployed eight times, including two combat deployments. According to his sentencing memorandum, Lentz has PTSD and seeks treatment from the Department of Veterans Affairs.

Moss said that while Lentz didn’t engage in violence that day, his presence played a role in events that will forever be a “stain on this nation’s history.”

“If this country stands for anything, it is that we live in a country where there is a peaceful transition of power,” Moss said. He noted that while around half of Americans are usually unhappy with an election result, voters have usually “cared more about [their] country than [their] candidate.”

“When we start to splinter in a way in which we care more about individual candidates [and their] agendas than our country … we are in a sad sad state of affairs,” Moss added.

Moss said that Lentz’s assertions that police at the Capitol “cannot stop” the oncoming mob were “very troubling” to him.

“That’s not somebody who simply wandered into the Capitol and is curious about what’s going on that day,” Moss said.

In the end, however, Moss declined to impose jail time, having praised Lentz’s law enforcement and military background and his “extraordinary” contrition.

Pursuant to the plea agreement, Lentz will pay $500 toward the estimated $2.7 million in damage done to the Capitol.