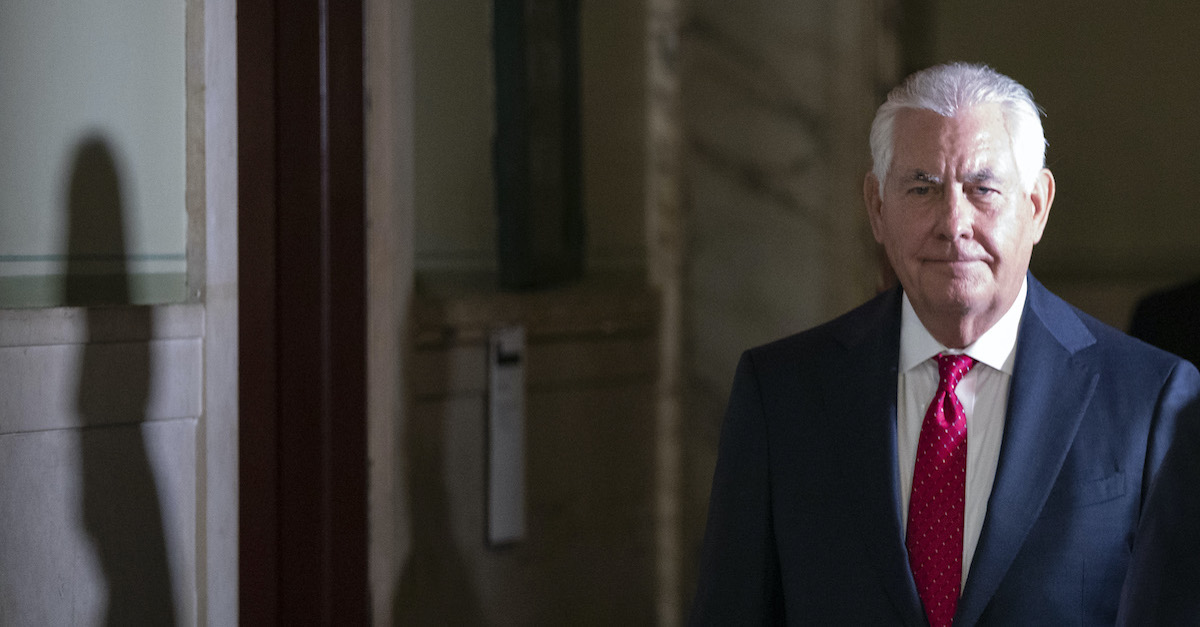 Tillerson testified that Barrack called his office to request an ambassadorship, though the ex-Secretary of State said he could not recall to which country Barrack wanted to be assigned.

“I just took note of his interest, and it was a fairly short conversation, as I recall,” he said.

Tillerson said that he added Barrack’s interest to a list of topics to broach for his next conversation with Trump.

Federal prosecutors have charged Barrack and his then-assistant Matthew Grimes with failing to register as agents of the UAE, in violation of 18 U.S.C. Section 951(a). Sometimes described as “espionage-lite,” it is the same statute previously used against Russian agent Maria Butina.

When trial began on Sept. 21, prosecutors claimed that Barrack used his “unique access” to Trump to gain power and money. Barrack, a one-time billionaire, is the former CEO of Colony Capital. The third defendant, UAE national Rashid Sultan Rashid Al Malik Alshahhi, remains at large and is also known as Rashid Al Malik and Rashid Al-Malik.

According to the government, Barrack referred to Al-Malik as “The UAE’s secret weapon to influence the United States.”

Shortly after Trump’s election, Tillerson’s name was floated as his likely Secretary of State. Trump formalized Tillerson’s nomination for the position on the day of his inauguration. On Feb. 1, 2017 the Senate confirmed the ex-Exxon CEO as the top U.S. diplomat, a position that Tillerson served for more than a year. He spoke about his path to Foggy Bottom on the witness stand, from his first contact by then-Vice President-elect Mike Pence to first meeting with the soon-to-be president at Trump Tower.

Tillerson, who never served in the military, said that he accepted the position to serve the United States.

“When this opportunity came up, I thought it was my time, my turn to serve,” Tillerson said.

On the witness stand, Tillerson said it was his regular practice to learn about the affiliations of those who had his ear. This included any possible conflicts with foreign governments, testified Tillerson, who agreed with the prosecutor’s proposition that “conflicts matter.” Prosecutors say that Barrack never notified the attorney general’s office pursuant to the Foreign Agents Registration Act.

Tillerson’s tenure included the blockade of Saudi Arabia, the United Arab Emirates, Bahrain and Egypt against Qatar in 2017, and he testified that he learned about the crisis during a national security crisis with then-Defense Secretary James Mattis. The Saudi-led coalition of blockading nations had accused Qatar of supporting terrorism and harboring the Taliban.

As recounted by Tillerson, the administration believed there was “no validity” to those claims and urged against military escalation.

Prosecutors allege that Barrack provided UAE officials with sensitive information, including internal discussions within the Trump administration about the blockade. Tillerson said that he never gave such information to foreign powers, such as the Emirates.

“The US needs to retain the full capacity to deliberate,” Tillerson said, adding that privacy over such discussions allows the administration to “adjust its position as events change.”

On cross-examination, Barrack’s attorney Randall Jackson noted that the politicians from both parties sought his expertise on foreign policy because of his experience as CEO of Exxon. Jackson, a former federal prosecutor with the Southern District of New York, noted that Tillerson engaged with foreign leaders in Yemen and other countries in that capacity.

One of the world leaders Tillerson had to interact with on the job, Jackson noted, was Russia’s authoritarian leader Vladimir Putin.

“I don’t interact with him any more,” added Tillerson, who acknowledged that he received the “Order of Friendship” from Russia. (Putin later joked that he regretted giving Tillerson the award.)

The defense’s claims that this is why the Trump administration sought the views of Barrack, then a successful head of a global investment firm.

During opening statements, Barrack’s attorney Michael S. Schachter said that his client was not acting at anyone’s direction: “Tom Barrack was his own man,” Schachter said in September.

Grimes’s attorney Abbe Lowell, asking his client to stand up, asked Tillerson if the former Secretary of State recognized his client. Tillerson replied that he assumed they met, but he did not know.

In a series of questions on redirect, Assistant U.S. Attorney Hiral Mehta pointedly sought to differentiate Tillerson’s activities as a private businessman and Barrack’s. He asked whether Tillerson sought a foreign government’s talking points, sought their edits for an editorial, or supplied them with information.

At each iteration, Tillerson gave the same response: “No.”