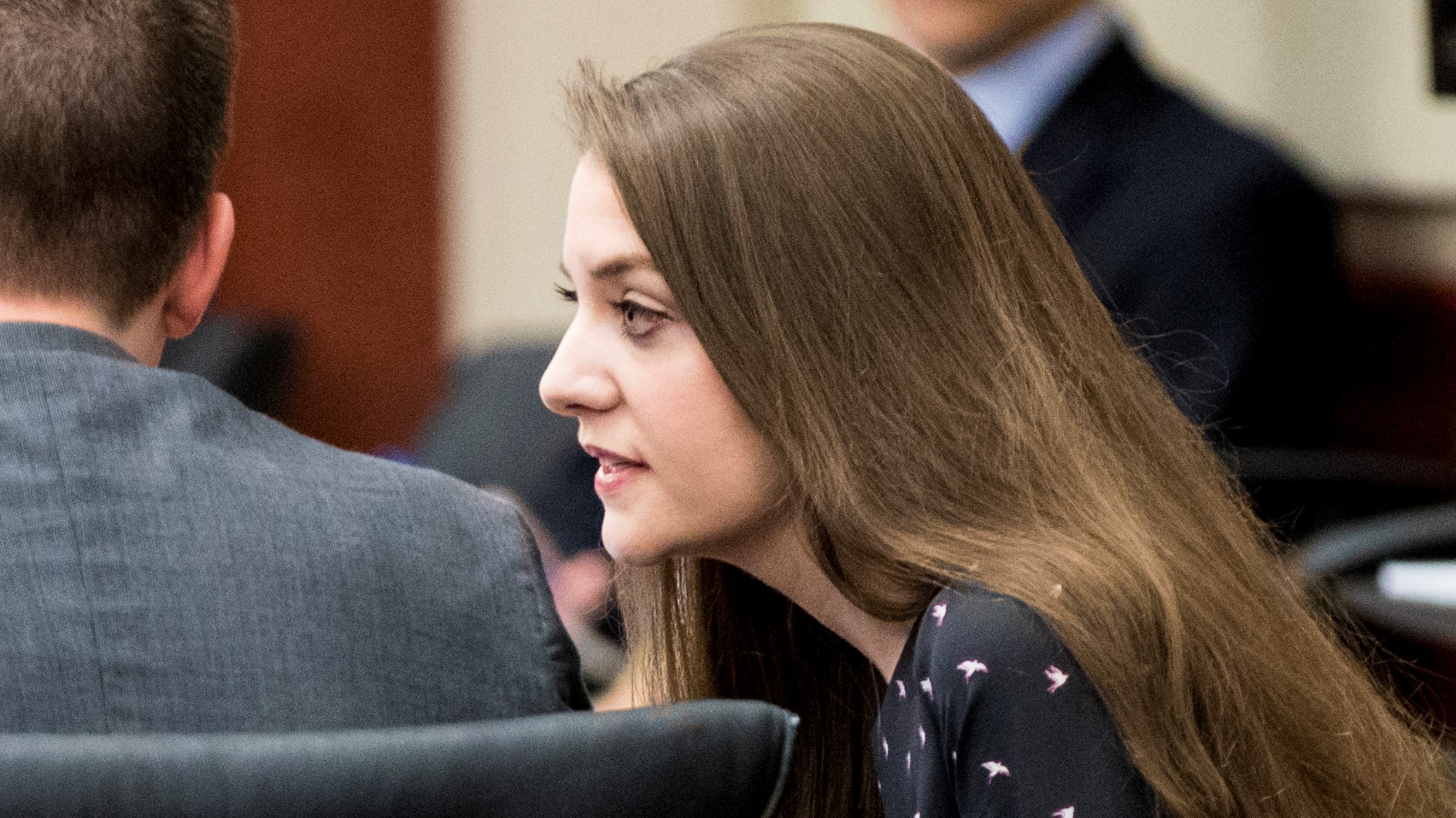 Hubers speaks to her attorney before Bolte’s testimony.

The northern Kentucky woman who admits to shooting and killing her boyfriend heard testimony late Thursday afternoon from that boyfriend’s new date for the night.

Defendant Shayna Hubers is accused of murdering attorney Ryan Poston on October 12, 2012. Witnesses testified that Poston and Hubers had a troubled relationship and that they believed the couple had made a final split within a day or two of his death. Hubers says Poston was abusive, unfaithful, demeaning, and frequently was critical of her body and her sexual performance. Prosecutors say Hubers was clingy, manipulative, and could not stand the thought of Poston leaving her for another woman. Hubers says she grabbed a gun she believed Poston was moving for during a physical altercation. She pulled the trigger before he could get it. Prosecutors say Poston was not abusive.

It turns out Poston had been communicating with Audrey Bolte, known best for being named Miss Ohio 2012, while in that on-again, off-again relationship with Hubers. Bolte was the woman Poston was going to see for the first time in person the night Hubers shot and killed him, testimony revealed. 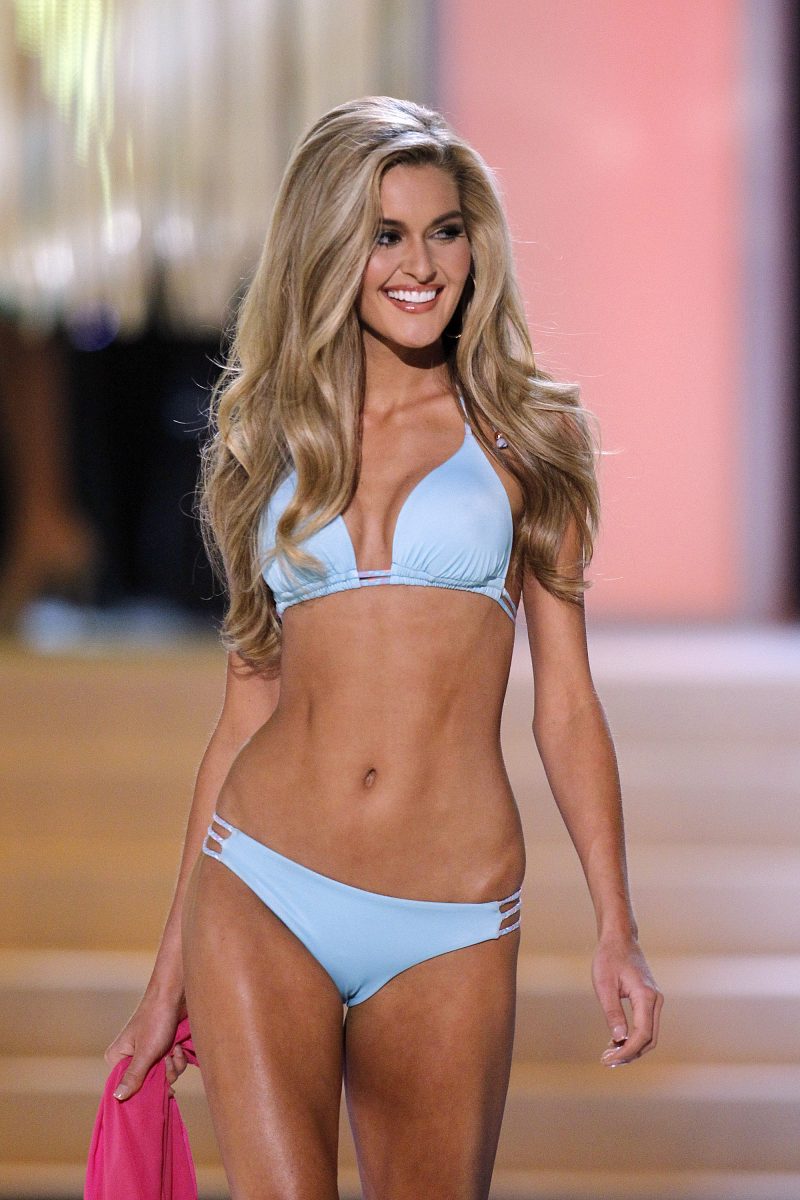 Bolte competing in a pageant in June 2012 (four months before Poston’s death).

As Bolte approached the witness stand, Hubers appeared not to look at her. Instead, Hubers seemed focused on papers on the table in front of her. During another portion of Bolte’s testimony, Hubers stared straight forward without expression. During at least one moment, Hubers was markedly shuddering while Bolte was on the stand. It is unclear whether Hubers was bothered by Bolte’s presence or whether the room’s temperature was causing her to shudder.  (Reporter’s note:  the courtroom has been extremely cold; many in attendance are wearing jackets or sweaters.)

Bolte testified that she never met Poston in person. Her communication with Poston started January 27, 2012, via Facebook. They became “friends” on Facebook but did not directly message one another. Then, Bolte posted something. Poston commented.

Bolte explained that she became bored one evening and asked her Facebook friends for help reviewing movies. Poston “replied to one of them and left a funny, interesting comment.” That led to direct messaging. Bolte described it as “lighthearted” and “funny banter.” She said Poston was “funny and smart” based on her messages with him. He “piqued her interest.” The direct messaging led to texting.

In the days leading up to the date of the shooting, Poston and Bolte made plans to meet. The plans were to “meet up at a local low-key place, grab a drink, maybe shoot pool,” she testified. The goal was “something low-key and simple.” Poston alluded to perhaps meeting up at an event in the future, but the plan they agreed upon was to meet up at a bar. “We had friends in the same friend circles,” Bolte noted.

Poston even talked to Bolte about what he should wear to a local dive bar the night they planned to meet.  He asked if he should wear his suit from work. Bolte said he could tone it down. Poston might have gone home to change his clothes.

Bolte said their actual meeting point was to be at a local gas station. From there, they were planning to go to a place Bolte referred to as the “Milford Inn.”

“Did you go to meet Ryan?” prosecutors asked.

“He didn’t show up,” Bolte replied.

“I went to the place to see if he was there. Ryan never showed up.”

Bolte said she looked around a bit in an attempt to find Poston.

“Did you ever hear from [Ryan Poston] again?” prosecutors asked.

During cross, Bolte struggled to recall whether Poston mentioned carrying a gun. (Defense attorneys have injected questions about Poston’s gun ownership frequently into the proceedings.) When shown her Facebook messages with Poston, Bolte said that “apparently” the conversation about gun ownership happened.

Bolte also struggled to recall whether she conveyed to Poston that she was not looking for a relationship. She explained that she had recently left a relationship, so she was “hesitant to get into the full dating scene — as any reasonable woman would be.” Later, Bolte said she had “recently gotten out of a relationship.”

“I was not looking for an immediate boyfriend by any means, but I wasn’t meaning that I wasn’t going out on a first date.”

Bolte did not recall Poston saying that he was also not looking for a relationship.

During a series of questions about why she would meet Poston at a gas station and the Milford Inn, where they discussed going next, Bolte shot back at a question about where she was living at the time.

“Do I have to answer that?” Bolte said to the judge.

The state objected as to the relevance. The judge overruled the objection.

Defense Attorney Walden pulled the question back slightly by not seeking a street or number.

“Was it in Batavia?” Walden asked.

During a brief redirect, Bolte agreed that she considered it fun to meet new people, such as Poston.

“Even though you may not have been ready to put a ring on your finger and walk down the aisle with Ryan Poston, you were still willing to meet him?” the prosecutor quipped.

The defense objected to the leading question. The judge sustained the objection. The prosecutor moved on by withdrawing the question.

Bolte then confirmed Poston talked about a concealed carry license during their very first conversation.

“Did it scare you that he had a concealed carry license?” the state asked.

Bolte is the one who first brought up concealed carry, the prosecutor noted.

Bolte said she “had a bad experience in the past.” She expressed an interest in a concealed carry license. Poston replied that he had one.