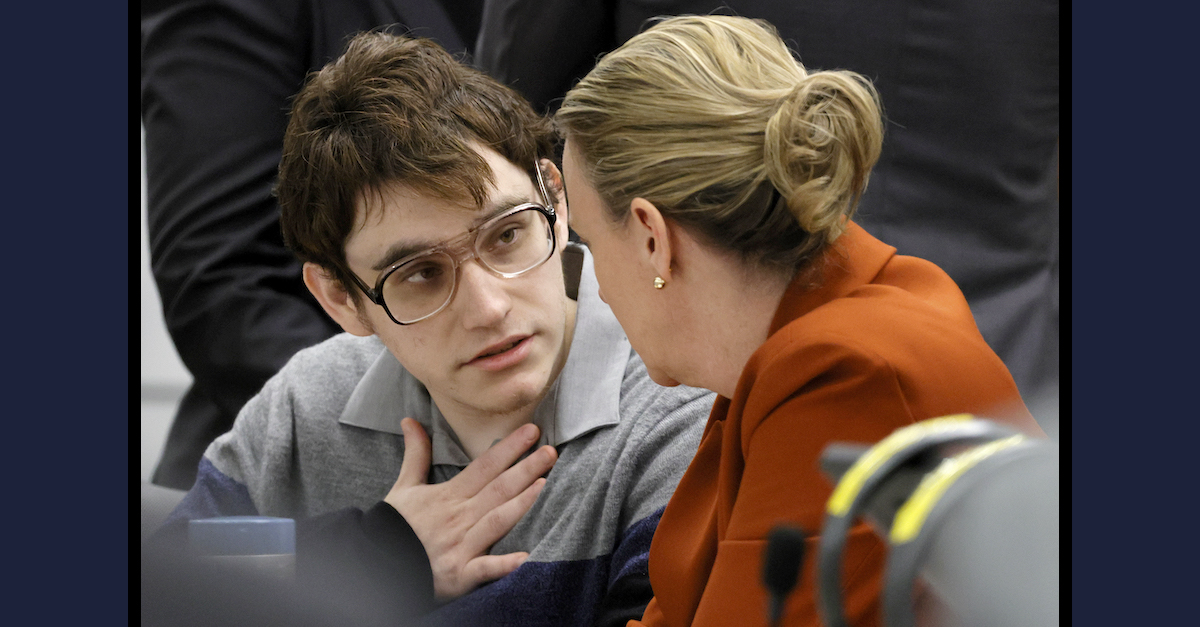 A female juror who decided the fate of admitted Parkland school shooter Nikolas Cruz claims she received a “perceived” threat from “another juror while in the jury room.” That’s according to court documents filed late Thursday in the case.

The filings came just hours after a jury deadlocked on Cruz’s punishment. Prosecutors with the State Attorney’s Office had long sought the death penalty against Cruz, who killed 14 students and three staffers at Florida’s Marjory Stoneman Douglas High School on Feb. 14, 2018. Defense attorneys asked the jury to spare Cruz’s life. Because the jury could not unanimously agree on a death sentence, the default punishment for Cruz is life without parole.

Prosecutors explained the alleged situation in the jury room in the following notice to the court:

No one from the State Attorney’s Office retuned the juror’s phone call. The juror’s identity and contact information will be provided to this Court and opposing counsel once this matter is set down for hearing.

Judge Elizabeth Scherer also filed with the clerk of court’s office a copy of a note from a juror who lodged potentially congruent allegations because of her decision to spare Cruz’s life. Law&Crime is not publishing the jurors’ full names at this time, even though Scherer filed them on the record:

I would like to notify you that Melody [redacted by Law&Crime], one of the jurors in this case, heard jurors who voted for the death penalty stating that I had already made up my mind on voting for life before the trial started.

This allegation is untrue and I maintained my oath to the court that I would be fair and unbiased.

The deliberations were very tense and some jurors became extremely unhappy once I mentioned that I would vote for life.

I just wanted to make you aware of this matter. If you have any questions, please feel free to call me at [redacted by the court].

The State Attorney’s Office filed a concomitant request with Scherer for permission to interview the juror who called to report the alleged conduct. In that document, prosecutors simply referred to the juror as “Juror X” and promised to give the name to the judge in camera — only for her review — as part of the process.

“The State requests an interview be granted to investigate this serious allegation because a crime may have been committed,” the prosecutor’s office wrote.

Citing a previous case, the State Attorney’s office said a proper investigation was both legal and necessary:

Pozo v. State, 963 So.2d 831, 834 (Fla. 4th DCA 2007) is squarely on point. In Pozo, after the verdict, a juror wrote to the judge of her dismay over the jury deliberations. She further added that she was struggling with “the aggressive behavior by two of my fellow jurors.” Upon becoming aware of the Pozo juror’s letter, defense counsel filed a notice of intention to interview jurors, claiming that the letter reflected that this juror and possibly other jurors were concerned about possible repercussions to themselves.

“Florida Rule of Criminal Procedure 3.575 provides the procedure for interviewing jurors in criminal cases,” the prosecutor’s office then pointed out. The relevant rule, as cited in the court filing, reads accordingly:

“All that is required under Rule 3.575 is a statement of reasons why the verdict may be subject to challenge,” prosecutors asserted. “Therefore, rejecting juror interviews for the failure to have sworn proof was in error.” Pozo, Id. at 835.

Prosecutors baldly asserted that they have met the proper burden, though it’s unclear precisely why they think the verdict itself was “subject to challenge.” Assuming the letter to the judge was sent by the same juror who contacted the prosecutor’s office, the juror who sought to save Cruz’s life did not cave to threats or pressure — presumably to vote for death. Therefore, the juror’s choice (and, accordingly, the verdict) was not altered by alleged threats or intimidation tactics. The juror’s choice (and, again, the verdict) held true in spite of those threats.

It is possible, perhaps, that prosecutors are instead seeking to ferret out whether the juror who voted for life walked into the proceeding with that preconceived outcome in mind. If so, the state’s goal here may be to upend the entire penalty phase of the case and, therefore, its outcome — not just to investigate any alleged assault or jury intimidation charge.

It would be a different story if, arguendo, the juror in question had said this: “I wanted to vote for life without parole, but another juror threatened me, so I switched.”

However, as noted above, state’s motion offered only conclusory affirmations and few precise reasons as to why prosecutors believe “the verdict may be subject to challenge.”

“This Court has a duty to investigate this allegation,” prosecutors continued in their motion to seek permission to investigate the matter. “Since this is a potential crime, the State requests that law enforcement conduct the interview of Juror X rather than the Court or the parties. Other grounds to be argued ore tenus.”

Ore tenus is just a fancy expression to describe for material that will be presented orally.

In filing their motion, prosecutors admitted that the rules of professional conduct blocked them from returning the juror’s phone call. The relevant rule reads as follows:

A lawyer shall not:

(4) after dismissal of the jury in a case with which the lawyer is connected, initiate communication with or cause another to initiate communication with any juror regarding the trial except to determine whether the verdict may be subject to legal challenge; provided, a lawyer may not interview jurors for this purpose unless the lawyer has reason to believe that grounds for such challenge may exist; and provided further, before conducting any such interview the lawyer must file in the cause a notice of intention to interview setting forth the name of the juror or jurors to be interviewed. A copy of the notice must be delivered to the trial judge and opposing counsel a reasonable time before such interview. The provisions of this rule do not prohibit a lawyer from communicating with members of the venire or jurors in the course of official proceedings or as authorized by court rule or written order of the court.