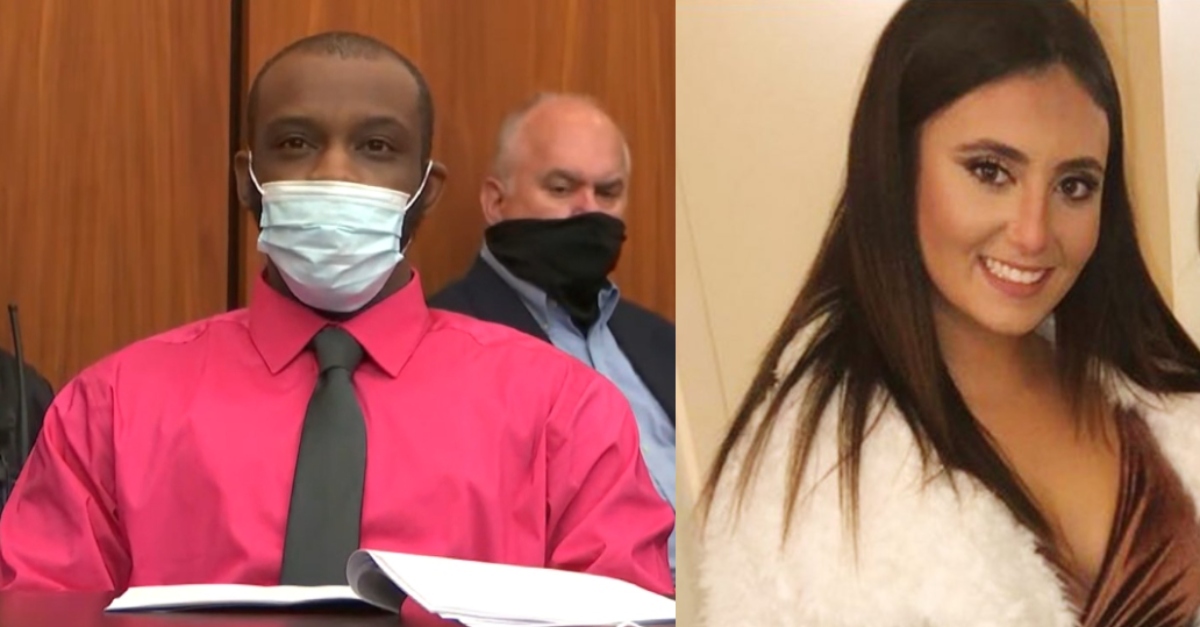 Nathaniel Rowland in court wearing shirt and tie; Samantha Josephson in a picture provided by police.

Rowland stabbed the victim almost 120 times with a double-bladed knife, prosecutors said. Josephson had just left a get-together in the Five Points district of Columbia, South Carolina, authorities said. She believed that Rowland’s black Chevy Impala was her Uber driver’s vehicle, they said. It was not.

Surveillance footage of Josephson stepping into the vehicle was the last time anyone saw her alive, prosecutor Daniel Goldberg told jurors in closing arguments on Tuesday. Rowland took Josephson, murdered her, and dumped her body near his family home in the community of New Zion in the early hours of March 29, 2019, according to the state’s version of events. The vehicle itself was likely the scene of the actual killing, based on the amount of blood found there, Goldberg said. Dr. Thomas Beaver, a forensic pathologist, testified Monday that she only had 20 milliliters of blood left in her. The human body normally contains close to a gallon, he said. In other words, Josephson was all but drained of her blood.

Defense lawyer Tracy Pinnock acknowledged that Josephson’s blood was in Rowland’s car and that her client ran from police during a traffic stop maintaining he was innocent. Rowland was the easy, simple answer, but not the right one, she said. Though he should not have run from police, there is no evidence he kidnapped and murdered Josephson. And he only ran from officers after one of them grabbed him and yelled at him, the defense lawyer said.

“Don’t let the narrative cloud what you can see with your own eyes,” she said.

Pinnock noted DNA from two males, and that Rowland was excluded from unidentified mixtures. In other words, the defense’s stance is that someone else committed the murder.

The state also reviewed the DNA evidence. Goldberg cited a DNA analyst who said that blood was on “everything,” including the backseats of the car, head rests, the roof, and front seat belt buckle, as well as items including Rowland’s shoe. Samantha’s blood was on the blade of his knife and Rowland’s DNA was on the handle, the prosecutors said.

Goldberg dismissed the defense’s theory. Not only would someone else have to killed her but they had to be wearing his pants, his bandana, driven his car, used his knife, had possession of his car, and jurors would have to believe this alternate suspect drove to New Zion in the middle of the night, he said.

[Screenshot of Rowland via Law&Crime Network; image of Josephson via Columbia Police Department]